The ShKAS (Shpitalny-Komaritski Aviatsionny Skorostrelny, Shpitalny-Komaritski rapid fire machine gun for aircraft; Russian: ШКАС - Шпитальный-Комарицкий Авиационный Скорострельный) is a 7.62 mm machine gun widely used by Soviet aircraft in the 1930s and during World War II. It was designed by Boris Shpitalniy and Irinarkh Komaritsky and entered production in 1934. ShKAS was used in the majority of Soviet fighters and bombers and served as the basis for the ShVAK cannon.

ShKAS is a gas-operated revolver-type machine gun; it has however a single chamber in which the pin strikes the primer.

A key element of the ShKAS' high rate of fire is the revolving drum (feed cage) that holds ten rounds and provides a very smooth, progressive removal of the cartridges from their disintegrating link belt. Another element is the lightweight recoiling portion of the gun, weighing only 921 grams (2.07 lb).

A declassified US analysis of the feed system, based on models captured during the Korean War, reads:[2]

An interesting departure was made from the heretofore orthodox practice of feeding ammunition to a gun of this caliber. The feed, somewhat resembling a grooved revolver cylinder, is an integral part of the gun, and the cartridges remain axial throughout the entire operation.

The cylindrical feed cage is rotated by an arm that engages a slot in the gas piston. A helical groove in the drum arrangement withdraws the cartridges from the metal disintegrating link belt as it moves through the feedway by engaging their rims and gradually camming the cartridges rearward. The freed cartridges are then presented at the bottom of the receiver for chambering by final rotation.

This circular type of feed holds ten rounds. Several phases are required to completely delink a round and roll it up into position for being shoved into the chamber. A small folding handle held on the top side is used to rotate the feed drum when filling with cartridges.

Camming the round slowly out of the belt with this type of feeder causes practically no drag when the weapon is fired at high speed. It has belt pull enough to take care of practically any length belt desired. [...]

The Russian Air Force nicknamed this circular arrangement the "bird-cage" feed. It is an adaption of a system first used by the Polish designer, Gabriel Szakats.

After analyzing the less unusual parts of the ShKAS, the US source concludes:[2]

Thus the Shkas is an innovation based on the features of the Maxim (ejection and buffer), the Szakats (rotating feed), and the Berthier (piston-actuated, propped breech, locking.) 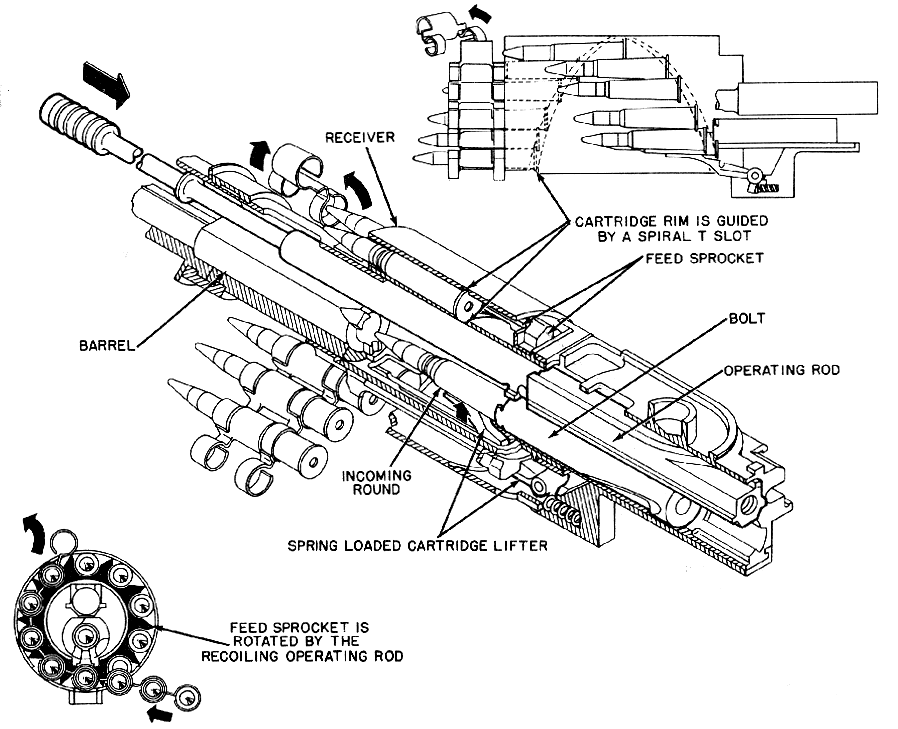 Although ShKAS is best known for its high rate of fire, it did have provisioning for slower cyclic rates. This was done by "changing the position of the holes in the gas regulator, which comes with holes of three different sizes, 1/12-inch, 1/10-inch and 1/8-inch. The smaller the orifice used, the more moderate is the rate of fire obtained."[4]

Initial production consisted of cable-charged wing-mounted and turret-mounted ShKAS with a synchronized version entering service in 1936.

By 1952 Western intelligence had identified five different models, all including the number "426" in their markings:[5]

"KM" stands for "constructed model", i.e. production. The intended role was marked with the letters "T" for flexible, "K" for wing, and "S" synchronized.[5] The flexible version was usually mounted in a Soviet copy of the Scarff ring.[6] The 1937 model had slightly higher maximum rate of fire of 2,000 rounds per minute.[6] The amount of ammunition normally carried was 750 rounds for the fixed models and 1,000 to 1,500 for the flexible.[7]

In 1939, a small number of Ultra-ShKAS were produced featuring a firing rate of 3,000 rounds per minute but these saw only limited use due to reliability problems.

A one-second burst from four ShKAS in Polikarpov I-153 or Polikarpov I-16 placed 120 bullets within 15 angular mils at 400 meters (1,312 feet) giving a firing density of 5 bullets per square meter of the sky. This was significantly higher than contemporary aircraft from other nations, especially considering that four guns with 650 rounds of ammunition per gun weighed a total of only 160 kg (350 lb).

" The ShKAS machine gun had a high rate of fire but it also had 48 ways of jamming. Some of them could be fixed immediately, some could not. And 1,800 rounds a minute was an insanely high rate of fire. If you pulled the trigger too long, the ShKAS would fire all its ammo in one go and that would be it!!"

Although chambered in the 7.62x54R, the ShKAS guns used cartridges specially built for them to smaller tolerances; to distinguish them from the regular 7.62 ammunition, the letter "Sh" (Ш) was imprinted on the bottom of the cases. The cases, designed by N. M. Elizarov, also had a few additional features like double crimping and a thicker case wall of "bimetallic" construction instead of the traditional brass.[10] The main type of bullet used was armor-piercing incendiary B-32 bullet.

Some military historians consider that feed system of the Mauser MG 213C (the seminal revolver cannon for Western designs) was inspired by the ShKAS.[11][12][13]