The Serbo-Turkish War (Serbian language: Српско-турски рат), sometimes called the Serbian–Ottoman War, was fought between the Principality of Serbia and the Ottoman Empire from the Serbian declaration of war on 30 June 1876 until the Treaty of San Stefano of 3 March 1878. The war merged with the Bulgarian uprising, the Montenegrin War and the Russo-Turkish War (1877–78).

A rebellion in nearby Herzegovina, backed unofficially by Serbia and Montenegro, sparked a series of rebellions and uprisings against the Ottoman forces in Europe. Montenegro and Serbia agreed to declare a war on Turkey on 18 June 1876. Forces of Serbia were joined by numerous volunteers from Old Serbia and Macedonia.[1] The Ottoman forces were composed to the large extent of Albanians from Kosovo Vilayet (modern day Kosovo and Macedonia).[2]

In July–August, the ill-prepared and poorly equipped Serbian army helped by Russian volunteers failed to achieve offensive objectives but did manage to repulse the Ottoman offensive into Serbia, and on August 26, Serbia pleaded European powers to mediate in ending the war. A joint ultimatum by the European powers forced the Porte to give Serbia a one month truce and start peace negotiations. Turkish peace conditions however were refused by European powers as too harsh.

In early October, after the truce expired, the Turkish army resumed its offensive and the Serbian position quickly became desperate. As a result, on October 31, 1876 Russia issued an ultimatum requiring the Ottoman Empire to stop the hostilities and sign a new truce with Serbia within 48 hours. This was supported by the partial mobilization of the Russian army (up to 20 divisions). The Sultan accepted the conditions of the ultimatum.

The atrocities of the Ottoman Empire in suppressing unrest in the Balkan provinces eventually led to the Russo-Turkish War of 1877-78, which ended in Turkish defeat, and the signing of the Treaty of San Stefano in March 1878, followed in July of the same year by the Treaty of Berlin, severely reducing Ottoman territories and power in Europe. 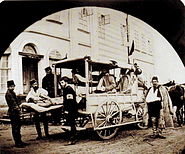