The X-26 Frigate is the longest-lived of the X-plane programs. The program included the X-26A Frigate sailplane and the motorized X-26B Quiet Thruster versions: QT-2, QT-2PC, and QT-2PCII. All were based on the Schweizer SGS 2-32 sailplane.

The X-26A was used by the United States Navy (USN) to train test pilots in the condition of yaw/roll coupling. Since jet trainers were known to be dangerous in this condition, the X-26 was based on the Schweizer SGS 2-32 sailplane. Sailplanes react much slower and are easier to control than jet aircraft, making the X-26 a much safer training platform. Four aircraft were originally ordered. Three of the original planes crashed. The USN purchased a replacement for each of the crashed units.

After demonstrating quiet flight,[1] the aircraft were again modified to military QT-2PC configuration, known only as Tail Numbers "1" and "2", with GFE avionics and camouflage for night operation. They were successfully evaluated in Southeast Asia (Prize Crew OpEval) for covert ("stealth") tactical airborne observation in the spring of 1968 (during Têt). The two QT-2PCs were returned to USNTPS in 1969 and re-designated X-26Bs. 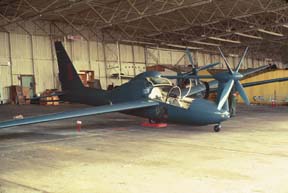 |} The remaining X-26B aircraft were known to most of the original development team as QT-2 N2471W and QT-2PC #1; the location of the remains of the aircraft are unknown.

The other X-26B aircraft (known as QT-2 N2472W and QT-2PC #2) has been retro-verted to SGS 2-32 Configuration and is being operated (and known as “72 Whiskey”) at Mile High Glider in Boulder, Colorado.[citation needed]

The Q-Star was the first aircraft to use a rotary combustion chamber (Wankel) engine[citation needed]. It is currently[when?] being returned to flight status.

The YO-3As were tactically evaluated in Southeast Asia from mid 1969 to late 1971. They were later used by the Louisiana Dept of Wildlife & Fisheries (LDWF) and the Federal Bureau of Investigation (FBI) in law enforcement, and by NASA for scientific applications.