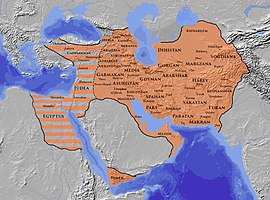 The defense lines (or "limes") of the Sasanians were part of their military strategy and tactic. They were networks of fortifications, walls, and/or ditches built opposite the territory of the enemies.[1] These defense lines are known from tradition and archaeological evidence.[2]

In the early period of the Sasanian Empire, a number of buffer states existed between Persia and the Roman Empire, which played major role in Roman-Persian relations. Both empires gradually absorbed these states, and replaced them by an organized defense system run by the central government and based on a line of fortifications (the limes) and the fortified frontier cities, such as Dara,[3] Nisibis, Amida, Singara, Hatra, Edessa, Bezabde, Circesium, Rhesaina (Theodosiopolis), Sergiopolis (Resafa), Callinicum (Raqqa), Dura-Europos, Zenobia (Halabiye), Sura, Theodosiopolis (Erzurum),[4] Sisauranon, etc.

According to R. N. Frye, the expansion of the Persian defensive system by Shapur II r. 309–379– ) was probably in imitation of Diocletian's construction of the limes of the Syrian and Mesopotamian frontiers of the Roman Empire over the previous decades.[5] The defense line was in the edge of the cultivated land facing the Syrian Desert.[1]

Along the Euphrates (in Arbayistan), there was a series of heavily fortified cities as a line of defence.[6]

Wall of the Arabs

During the early years of Shapur II (r. 309–379), nomadic Arabian tribesmen made incursions into Persia from the south. After his successful campaign in Arabia (325) and having secured the coasts around Persian Gulf, Shapur II established a defensive system in southern Mesopotamia to prevent raids via land.[7] The defensive line, called the Wall of the Arabs (Middle Persian: War ī Tāzīgān, in Arabic language: خندق سابور‎ Khandaq Sābūr, literally "Ditch of Shapur", also possibly "Wall of Shapur"),[8][9][10] consisted of a large moat, probably also with an actual wall on the Persian side, with watchtowers and a network of fortifications, at the edge of the Arabian Desert, located between modern-day al-Basrah and the Persian Gulf.[7][8]

The region and its defense line was apparently governed by a marzban. In the second half of the Sasanian history, the Lakhmid/Nasrid chiefs also became its rulers. They would have protected the area against the Romans and against the Romans' Arab clients the Ghassanids, sheltering the agricultural lands of Sasanian Mesopotamia from the nomadic Arabs.[8]

The Sasanians eventually discontinued the maintenance of this defense line, since they perceived the main threats to the empire lay elsewhere. However, in 633 the empire's ultimate conquerors actually came from this direction.[11]

Massive fortification activity was conducted in the Caucasus during the reign of Kavad I (r. 488–496, 498–531– ) and later his son Khusrow I (r. 531–579– ), in response to the pressure by people in the north, such as the Alans. Key components of this defensive system were the strategic passes Darial in the Central Caucasus and Derbent just west of the Caspian Sea, the only two practicable crossing of the Caucasus ridge through which the land traffic between the Eurasian Steppe and the Middle East was conducted. A formal system of rulership was also created in the region by Khusrow I, and the fortifications were assigned to local rulers. This is reflected in titles like "Sharvān-shāh" ("King of Shirvan"), "Tabarsarān-shāh", "Alān-shāh/Arrānshāh",[12][13] and "Lāyzān-shāh".

The pass of Derbent (Middle Iranian name is uncertain) was located on a narrow, three-kilometer strip of land in the North Caucasus between the Caspian Sea and the Caucasus mountains. It was in the Sasanian sphere of influence after the victory over the Parthians and the conquest of Caucasian Albania by Shapur I (r. 240/42–270/72– ). During periods when the Sasanians were distracted by war with the Byzantines or conflicts with the Hephthalites in the east, the northern tribes succeeded in advancing into the Caucasus.[14]

A mud-brick wall (maximum thickness 8 m, maximum height ca. 16 m) has been attributed to Yazdegerd II (r. 438–457– ) as the first Sasanian attempt to block the Derbent pass, though it may have been a reconstruction of earlier defenses. It was destroyed in a rebellion in 450.[14]

Location: 41°07′59″N 49°03′07″E﻿ / ﻿41.133°N 49.052°E﻿ / 41.133; 49.052. The second known Sasanian reconstruction of the fortifications in the Caucasus is attributed to the second reign of Kavadh I (498–531), who constructed the long fortification walls at Besh Barmak (recorded as Barmaki Wall in Islamic sources) and Shirvan/Gilgilchay (recorded as Arabic Sur al-Tin in Islamic sources), also called the Apzut Kawat (recorded in Armenian sources, from Middle Persian *Abzūd Kawād, literally "Kavadh increased [in Glory]" or "has prospered"),[13] were constructed using a combination of mud brick, stone blocks, and baked bricks. The construction was carried out in three phases, extending to the end of the reign of Khusrow I, but was never actually completed. The defensive line stretched from the Caucasian mountains in the southwest to the shore of the Caspian Sea to the east (the water level was much lower back then).[14]

With a length of 3,650 m on the north side and 3,500 m on the south and featuring seven gates, massive rectangular and round towers and outworks, the wall connected 30 already existing fortifications. Today the northern wall and the main city walls remain, but most of the southern wall is lost. The construction techniques used resemble those of Takht-e Soleiman, also built in the same period.[14] Derbent was also the seat of a Sasanian marzban.[14]

Derbent pass was the most prominent Sasanian defensive structure in the Caucasus. Later Muslim Arab historians tended to attribute the entire defense line to Khosrow I, and included it among the seven wonders of the world. In the Middle Ages, Alexander the Great was credited with having sealed off the Darband pass against the tribes of Gog and Magog advancing from the north;[14] whence the name "Gate of Alexander" and the "Caspian Gates" for the Derbent pass.

Darial Gorge (Middle Persian language: ʾlʾnʾn BBA Arrānān dar, Parthian language: ʾlʾnnTROA; meaning "Gate of the Alans"),[15] located in the Caucasus, fell into Sasanian hands in 252/253 as the Sasanian Empire conquered and annexed Iberia.[16] It was fortified by both Romans and Persians. The fortification was known as Gate of the Alans, Iberian Gates, and the Caucasian Gates.

The Great Wall of Gorgan (or simply the Gorgan Wall) was located in north of the Gorgan River in Hyrcania, at a geographic narrowing between the Caspian Sea and the mountains of northeastern Persia. It is widely attributed to Khosrow I, though it may date back to the Parthian period.[2][17] It was on the nomadic route from the northern steppes to the Gorgan Plain and the Persian heartland, probably protecting the empire from the peoples to the north,[18][19] in particular, the Hephtalites.

The Wall of Tammisha (also Tammishe; New Persian: تمیشه Tamīša, Tammīša), with a length of around 11 km, was stretched from the Gorgan Bay to the Alborz mountains, in particular, the ruined town of Tammisha (طميسة Ṭamīsa or طميس Ṭamīs in Arabic sources) at the foot of the mountains. There is another fortified wall 22 km to the west running parallel to the mentioned wall, between modern cities of Bandar-e Gaz and Behshahr.[22]

The Wall of Tammisha is considered to be the second line of defence after the Gorgan Wall.[23]

Recently, Touraj Daryaee has suggested the defensive walls may have had symbolic, ideological and psychological dimension as well, connecting the practice of enclosing the Iranian (ēr) lands against non-Iranian (anēr) barbarians to the cultural elements and ideas present among Iranians since ancient times, such as the idea of walled paradise gardens.[8]