Sangu is the term for the three armour components that protected the extremities of the samurai class of feudal Japan.

Traditional Japanese armour had six main components (hei-no-rokugu, roku gu, or roku gusoku), the dou or dō (chest armour), kabuto (helmet), mengu (facial armour), kote (armoured sleeves), sune-ate (shin armour), and the hai-date (thigh armour).[1][2][3] The sangu was composed of the suneate (shin armour), kote (armored sleeves), haidate (thigh armour). These armour components were a combination of a cloth backing and various types of armour that was attached to the cloth backing. On an original authentic suit of Japanese armour (gusoku) the cloth backings, edgings, decorations etc. and the armour elements would all be matching to each other.[4] 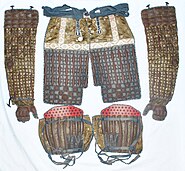 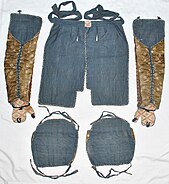 Parts of the sangu

Kote (armored sleeves). These sleeves are usually of textile material, often silk brocade, padded, laced with the small cords upon the inside of the arm and covered with kusari (chain armour), small metal plates of various size and shape, or quilting having small plates of metal or hide sewn inside each quilt. Gauntlets (tekko), or covers of metal plates for the back of the hand, are attached to the kote. There are many varieties of kote such as ubu-dzutsu, bishamon (having sode (shoulder guards) attached, shino-odatsugi, ainaka-gote, and others including aigote (in which the two sleeves are connected), kigote which is a general term for the kote extended or completed by the addition of erisuwari (padded collar), kata-ate (shoulder pads) and wakabiki (armpit protectors), jubangote ( kote with shirt), tominaga kote (named after its inventor), kusari kote (chain armour), kote haramaki ( kote that cover even the belly), kogusoku-kote (armor-like kote ), han kote (half kote gauntlets).[5]

Suneate (literally shin guards) are a type of armored shin protection worn by the samurai class and their retainers during the feudal era of Japan. Suneate first started being used in the 12th century. The suneate most commonly consisted of vertical armor plates of iron or leather that are connected by either hinges or chain armor (kusari), suneate could also be made almost entirely of chain armor kusari. The armour of the suneate was usually attached to a cloth backing which had cloth straps that were used to tie the suneate to the lower leg. There is usually a leather guard abumi-zure attached to the inner side of the place that will come into contact with the stirrup when riding. The more ancient examples of these shinguards are seen as plates, often with rather large knee guards attached. When worn the abumi-zure of the suneate will be placed toward the inner side of the leg.[6][7][8]

Haidate (thigh armour) was a type of cloth apron with various types of armour attached to the cloth backing.[9]