View source
watch 01:25
Jurassic World: Dominion Dominates Fandom Wikis - The Loop
Do you like this video?
Play Sound
"Saltier" redirects here. For other uses, see Salty (disambiguation).
Not to be confused with Saltaire, Satire, Solitary, or Solitaire.
For "The Saltire", see Flag of Scotland.

A saltire is a heraldic symbol in the form of a diagonal cross, like the shape of the letter X in Roman type. Saint Andrew is said to have been martyred on such a cross. In the Russian Orthodox tradition, the phrase Saint Andrew's Cross is often equated with the Orthodox cross, because of the tradition that Saint Andrew used such a cross when preaching in the respective regions.[Clarification needed] The saltire design is however distinct from that of the Orthodox Cross.

It appears in numerous flags, including those of Scotland and Jamaica, and other coats of arms and seals. A variant, also appearing on many past and present flags and symbols, is the Cross of Burgundy flag.

A warning sign in the shape of a saltire is also used to indicate the point at which a railway line intersects a road at a level crossing.

In Unicode, the cross is encoded at Error using {{unichar}}: Input "2613" is not a hexadecimal value.. See X mark#Unicode for similar symbols that might be more accessible.

The saltire appears on vexilla that are represented consistently on coinage of Christian emperors of Rome, from the fourth century. Anne Roes found it on coins of Constantius II, Valentiniandisambiguation needed, Jovian, Gratianus, Valens, Arcadius, Constantine III, Jovinus, Theodosius I, Eugenius and Theodosius II, though she searched only coins at the British Museum.[1] In the ninth and tenth century the saltire was revived in Constantinople as a symbol of Christian-imperial power.

Anne Roes detected the symbol, which often appears with balls in the quadrants formed by the arms of the chi-cross, in standards represented on coins of Persepolis, and she suggested that early Christians endorsed its solar symbolism as appropriate to Christ, and suggested "although it cannot be proved, that in the white saltire of St. Andrew we still have a reminiscence of the old standard of the Persepolitan kingdom."[2]

Like other ordinaries, a single saltire is throughout — extending to the edges of the field — as in the arms granted to G. M. W. Anderson[3] ('Or on a saltire engrailed Azure two quill pens in saltire Argent enfiling a Loyalist military coronet Or'); unless it is blazoned as cut off, as in the coat of Kemble Greenwood[4] ('Sable a chevron Erminois cotised between three saltires couped or').

When two or more saltires appear, they are usually blazoned as cut off.

A saltorel is a narrow saltire; the term is usually defined as one-half the width of the saltire, and is a relatively recent "innovation" which is really not very different from a 'fillet saltire' (as in the South African coat of National Cultural and Open-air Museum: 'Or; an ogress charged with a fillet saltire surmounted by an eight spoked wheel or, and ensigned of a billet sable; a chief nowy gabled, Sable').

A field (party) per saltire is divided into four areas by a saltire-shaped 'cut'. If two tinctures are specified, the first refers to the areas above (in chief) and below (in base) the crossing, and the second refers to the ones on either side (in the flanks); an example is the coat of Sandwell Metropolitan Borough Council,[5] 'Per saltire Vert and Or four Fers de Moline counterchanged in fess point a Fountain'. Otherwise, each of the four divisions may be blazoned separately.

The phrase 'in saltire' is used in two ways:

The Flag of Scotland, called The Saltire or St Andrew's Cross, is a blue field with a white saltire; according to tradition, it represents Saint Andrew, who is supposed to have been crucified on a cross of that form (called a crux decussata) at Patras. The St Andrew's Cross was worn as a badge on hats in Scotland, on the day of the feast of St Andrew.[1] It is the oldest continuously used sovereign flag in the world, having been in use since AD 832 - or so legend has it.

Numerous flags are inspired by the saltire and the colours blue and white—mostly connected with Scotland, where Saint Andrew is the national patron saint. The naval ensign of the Imperial Russian (1696–1917) and Russian navies (1991–present) is a blue saltire on a white field. Prior to the Union the Royal Scots Navy used a red ensign incorporating the St Andrew's Cross; this ensign is now sometimes flown as part of an unofficial civil ensign in Scottish waters. With its colours exchanged (and a lighter blue), the same design forms part of the arms and flag of Nova Scotia (whose name means 'New Scotland'). The Brazilian cities of Rio de Janeiro and Fortaleza also use a blue saltire on a white field, with their coats-of-arms at the hub. The flags of the Spanish island of Tenerife and the remote Colombian islands of San Andrés and Providencia also use a white saltire on a blue field.

In the old European Union standard, a black saltire set in an orange square is the hazard symbol for irritants (Xi) or harmful chemicals (Xn). It indicates a hazard less severe than skull and crossbones, used for poisons, or the corrosive sign.

In the politics of Scotland, both the Scottish National Party and Scottish Conservative Party use stylised saltires as their party logos, deriving from the flag of Scotland.

The trademark of X-Radium stoneware, patented cooking ware produced in the early 1900s by F. H. Griswold, was an X with radiating lines.

A saltire is the conventional road sign used to indicate the point at which a railway line intersects a road at a level crossing, called a "crossbuck" in this context.

A white saltire on a blue background (or black on yellow for temporary signs) is displayed in UK railway signalling as a "cancelling indicator" for the Automatic Warning System (AWS), informing the driver that the received warning can be disregarded.

In Cameroon, a red "X" placed on illegally constructed buildings scheduled for demolition is occasionally referred to as a "St Andrew's Cross". It is usually accompanied by the letters "A.D." ("à détruire" - French for "to be demolished") and a date or deadline. During a campaign of urban renewal by the Yaoundé Urban Council in Cameroon, the cross was popularly referred to as "Tsimi's Cross" after the Government Delegate to Yaoundé Urban Council Gilbert Tsimi Evouna.[10]

Less formally, on occasions of political controversy in many countries and times the usage of marking the face of a political opponent on a poster with an "X" is a commonly understood way of expressing strong disapproval, sometimes even the wish to kill the person whose picture is so marked.

The Maria Theresa thaler has a saltire to symbolize the 1750 debasement of the coinage, from 9 to 10 thalers to a Vienna mark, a weight of silver. An "X" is the Roman numeral symbol for "10".

In traditional timber framing a pair of crossing braces is called both a saltire and St. Andrews Cross.[11] Half-timbering, particularly in France and Germany, has patterns of framing members forming many different symbols known as ornamental bracing.[12]

Coat of arms of the Neville family 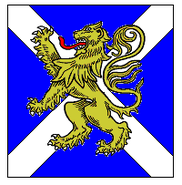 Tactical Recognition Flash of the Royal Regiment of Scotland

Battle flag of the Army of Northern Virginia

Flag of the Basque Country, Spain (the Ikurriña)

Flag of the Fortaleza (Ceará, Brazil)

A blue-and-white saltire used on a road sign to represent the Flag of Scotland.