Safir (Persian: سفیر, meaning "ambassador") is an Iranian 4x4 multipurpose military vehicle built by Fath Vehicle Industries.[3] This vehicle was officially unveiled in 2008. In the ceremony, Iranian defense minister said that 3000 Safirs were built in that year and Fath industries will deliver 5000 more vehicles to defense industry per year.[4]

Safir has a modular build and has many models. These include:[2][3]

Safir can greatly enhance Iran's ability to transport its units across the country and also improves the maneuverability of the Iranian forces across the battlefield. Also it acts as fast transporter of Fajr 1 rockets, 106 mm recoilless rifle and Toophan anti tank missile.[3] 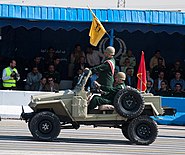