The SAAB 21 was a Swedish fighter/attack aircraft from SAAB that first took to the air in 1943. It was described as a very efficient weapons platform. It was designed as a twin boom pusher configuration, where the propeller is mounted in the rear of the fuselage, pushing the aircraft forward.

Sweden wished to ensure its continued neutrality through a policy of armed strength during World War II but were effectively denied access to foreign weapons. The original design studies began in 1939, based around the use of a "buried" Bristol Taurus engine. The project remained dormant until 1941. In response to the need for air defence, and faced with the prospect of imported designs being unavailable due to the war, Sweden undertook an indigenous rearmament programme including an advanced fighter. The low-wing monoplane Saab 21 fighter was ultimately designed around a license-produced version of the Daimler-Benz DB 605B engine, featured innovations such as tricycle landing gear, heavy forward-firing armament, ejector seat, and a twin-boom pusher layout that later allowed the type to be modified with a turbojet engine.

The advantages of a pusher design, are that the view forward is unobstructed and armament can be concentrated in the nose, while a major drawback is difficulty in escaping from the aircraft in an emergency, as the pilot could get drawn into the propeller blades. SAAB deliberated between systems that would eject the pilot, or jettison the propeller or the engine, (via a system of explosive bolts) [1]. and eventually installed an early ejector seat developed by Bofors for the purpose and tested in 1943.[2]

In 1947, the aircraft was extensively redesigned with over 50% airframe, tailplane and wing changes and fitted with a de Havilland Goblin turbojet, acquiring the new designation Saab J 21R.[3]

The first of three J 21 prototypes flew on 30 July 1943 flown by SAAB test pilot Claes Smith. During the takeoff, the wrong flap setting resulted in the prototype running into a fence at the end of the runway, damaging one of the landing gears. The subsequent test flight ended with a successful landing on the undamaged undercarriage units.[4]

A total of 54 J 21A-1 fighters constructed at the main plant in Trollhättan were delivered from December 1945, followed by 124 and 119 examples respectively of the J 21A-2 with revised armament and the J 21A-3 fighter-bomber. Utilized mainly in the bomber role, the limitation of the design led to a proposed front-engine replacement, the J 23.[5] An evaluation of the two designs led to the decision to retain the J 21 series but to consider the modification of the airframe to accommodate a jet engine.[5] While production line J 21A series aircraft were first selected for conversion, the initial piston-engine version continued in production in five series "batches" that were completed in 1948–1949. In service use, the J 21A was phased out after 1954.[2] 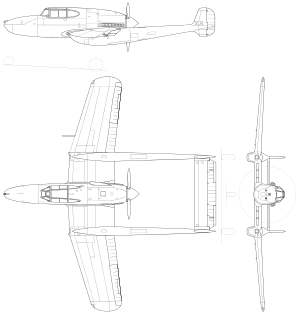