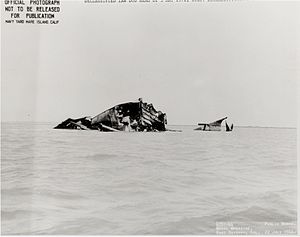 Name: SS Quinault VictoryOwner: War Shipping AdministrationOperator: United States Lines CompanyBuilder: Oregon Shipbuilding Corporation, Portland ORLaid down: 3 May 1944Launched: 17 June 1944In service: 11 July 1944Out of service: 17 July 1944 |module2= |module3=Fate: Exploded & sank 17 July 1944 Port Chicago, CA USA} |module4= General characteristics Class & type: Victory Ship VC2-S-AP3Displacement: 7,608 gross tons, deadweight 12,000 tonsLength: 439 ft (150 m)Beam: 62 ft (21.2 m)Draft: 28 ft 6 in (8.1 m)Propulsion: Westinghouse DR geared turbine, 2 x single screwed shaft horsepower 8,500Speed: 16.5 knotsComplement: 36 Merchant Marine and 17 US Naval Armed GuardsArmament: 1 single 5 inch & 1 single 3 inch mount.Notes: MC Hull No. 115 |} In what may have been the shortest life of any vessel built under the Emergency Shipbuilding program of World War II, the SS Quinault Victory began with her keel laying in Portland, Oregon on May 3, 1944 and ended 12 weeks later with her keel up in the shallow waters of Suisun Bay, California on July 17, 1944. Quinault Victory was the 31st Victory ship to be launched by Oregon Shipbuilding Corporation in Portland, Oregon on June 17, 1944.[1] Its sponsor was Mrs. Carroll McQueen with Mrs. A.T. Eaton and Mrs. Walter A. Sovey as matrons of honor and flower girl Ruth Burgwald.[2] Upon delivery to the War Shipping Administration Quinault Victory was leased to the United States Lines Company. On July 11, 1944 Quinault Victory sailed from Portland, under the command of Merchant Marine Captain Robert J. Sullivan arriving at the Shell Oil Company's Martinez, California refinery on July 17, 1944 where she took on a partial load of fuel. Some of the oil taken aboard was of a type that released light hydrocarbon gas on agitation, heating, or standing. This could have resulted in formation of an explosive mixture in the confined air space above the oil in the tanks. Prior to being sent to Martinez a pre-loading inspection was made by the Port Director's officers and the Captain of the Port's office, and no defects noted.

Upon leaving Martinez she sailed up Suisun Bay to Port Chicago Naval Magazine, California arriving approximately 6:00 PM (Pacific War Time) in preparation for her maiden voyage.[3][4] Some difficulty was experienced in mooring because of wind and tide. She was moored on the starboard side headed east at the outboard berth across from the SS E.A. Bryan. Upon arrival at Port Chicago, both the loading officer and his assistants visited the ship, gave copies of pertinent magazine orders to the master, inspected some of the holds and saw the ship being properly rigged for loading. number 5 hold was not being rigged as it was not to be loaded that night This was the first time this vessel had been rigged for loading. Trouble was experienced with shackles and preventer guys as they were non-standard. Whips on some of the winches were on backwards and had to be corrected.

Loading should have started by midnight. Dunnage and loaded railcars were spotted on the pier for this purpose. The railcars slated for Quinault Victory contained 253 tons of bombs and 5 inch projectiles. Across the pier the E.A. Bryan already loaded with 6,064 tons of ammunition had an additional 176 tons on the pier, including 60 tons of incendiary clusters, to be loaded before sailing.[5]

At 10:18 PM two major explosions occurred 6 seconds apart in what became known as the Port Chicago disaster. 20 miles away in Berkeley the seismograph at the University of California recorded the explosions at a magnitude of 3.4. The force of the explosions lifted the Quinault out of the water landing 500 feet away upside-down facing the opposite direction. The E.A. Bryan was vaporized as there were no identifiable remains of her following the explosions.[6] The explosions at Port Chicago resulted in the death of 320 and injured 390 making it the worst U.S. homefront disaster of World War II.

The names of those killed aboard Quinault Victory are listed at the Port Chicago Naval Magazine National Memorial which was dedicated in 1994.