Built in just 56 days at the New England Shipbuilding Corporation in South Portland, Maine, and launched on 19 June 1943, this class EC2-S-CI ship not only made four perilous round trip wartime crossings of the Atlantic and served on D-Day, the vessel later saw sixteen months of service in both the $3 and the Indian Ocean calling at ports in Chile, Peru, New Guinea, the Philippines, India, China, and Australia.

The end of the war caused most of the Liberty ships to be removed from service in 1946 and many were subsequently sold to foreign and domestic buyers. Others were retained by the U.S. Maritime Commission for potential reactivation in the event of future military conflicts. Jeremiah O'Brien was mothballed and remained in the National Defense Reserve Fleet in Suisun Bay for 33 years. In the 1970s, however, the idea of preserving an unaltered Liberty Ship began to be developed and, under the sponsorship of Rear Admiral Thomas J. Patterson, USMS, (then the Western Regional Director of the U.S. Maritime Administration) the ship was put aside for preservation instead of being sold for scrap. In a 1994 interview printed by the Vintage Preservation magazine "Old Glory," Patterson is alleged to have claimed the ship was steamed to her anchorage in the mothball fleet (unlike the many that were secured as unservicable and towed into storage), and frequently placed at the back of the list for disposal, which undoubtedly contributed to her survival.

An all volunteer group, the National Liberty Ship Memorial (NLSM), acquired Jeremiah O'Brien in 1979 for restoration. At that time she was virtually the last Liberty at the anchorage. Amazingly, those who volunteered to resurrect the mothballed ship (led by Captain Edward MacMichael, NLSM Executive Director and Master) were able to get the antiquated steam plant operating while she remained in Suisun Bay. After more than three decades in mothballs, Jeremiah O'Brien's boilers were lit. The ship left the mothball fleet on 21 May 1980 bound for San Francisco Bay, drydocking, and thousands of hours of restoration work. She was the only Liberty Ship to leave the mothball fleet under her own power.[4] She then moved to Fort Mason, on the San Francisco waterfront just to the west of Fisherman's Wharf. There Jeremiah O'Brien became a floating museum dedicated to the men and women who built and sailed the ships of United States Merchant Marine in World War II. Licensed to carry tours around San Francisco bay, it was suggested that the ship be restored to ocean going specification, and after efforts in securing sponsorship this was accomplished in time for the 50th "D-Day" Anniversary Celebrations in 1994. The ship makes several passenger-carrying daylight cruises each year in the San Francisco Bay Area, and occasional voyages to more distant ports such as Seattle and San Diego.

Footage of the ship's engines was used in the 1997 film Titanic to depict the ill-fated ship's own engines.

In 1994 the Jeremiah O'Brien, in its eighth voyage, (the previous seven were during World War II) steamed through the Golden Gate, down the west coast, through the Panama Canal, and across the Atlantic to England and France, where Jeremiah O'Brien and her crew (a volunteer crew of veteran World War II-era sailors and a few cadets from the California Maritime Academy) participated in the 50th Anniversary of Operation Overlord, the allied invasion of Normandy that turned the tide of World War II in Europe — the only large ship from the original Normandy flotilla to return for the 50th anniversary celebration.

Polynesian fantasy, SS Jeremiah O’Brien. Two pinups were painted on her maiden voyage, just above the bow. When the ship was restored, the old pinups were found under later paint 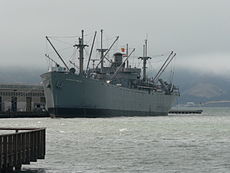 ^a While the preceding reference claims that Jeremiah O'Brien is the sole surviving D-Day armada ship, there is at least one other: the tugboat Nash, another National Historic Landmark ship located in Oswego, New York.