The SPECTRA helmet or CGF Gallet Combat Helmet is the ballistic helmet currently in use in the French military, as well as in the armies of several other countries. Built by CGF Gallet (the producer of the F1 helmet for firemen), it weighs 1.4 kg (3.1 lb), is available in two sizes, and is made from Spectra fibers, produced under license from Honeywell. The SPECTRA helmet is capable of stopping shell fragments of 1.1 g (0.039 oz) travelling at 680 m/s (2,230 ft/s), an 80% improvement over the Modèle 1978 helmet it replaces.

The SPECTRA helmet is the result of 1990 studies intended to design the helmet for the French Army of the 2000s. In 1992, the conflict in ex-Yugoslavia put large numbers of French blue helmets in contact with well-trained and well-equipped opponents, especially snipers during the Siege of Sarajevo, where heavier protection than the Modèle 1978 helmet was proved necessary. The Army requested an emergency study for the new helmet, and tests were made, which selected the Dyneema fiber. Gallet drafted a model based on the Personnel Armor System for Ground Troops (PASGT or "Fritz") helmet used by the United States Army, and produced a first series of 5,000 which was immediately made available to the Blue Helmets in the former Yugoslavia. These first models were blue in the mass. Later models used the NATO green colour. They gradually equipped all French troops, with a priority given to the units on missions in foreign territories.

The helmet is made of Spectra fibre. It is not bulletproof. It is a fragmentation-resistant helmet and has a maximum distortion (loss of shape) of 20 mm from a 9mm FMJ (Full Metal Jacket) bullet of 8 g (124 gr) travelling between 390 and 420 m/s on impact. It has a resistance to fragments in accordance with NATO Standardised Regulation ("STANAG") 2920, V50 mini, which is 640 m/s. Resistance to shock-impact in accordance with the EN397 standard, which is a protection standard for industrial helmets.

The helmet can be worn with earmuffs and an individual radio system. Further equipment, like night vision, can be added; the new infantry combat equipment of the French army, the Félin system, is partly based on development of the SPECTRA helmet.

Official designation of CGF Gallet is Série 8320 casque de combat TC "D" and they are made in three size;

The helmet is also available without the visor, as to facilitate the use of night vision equipment, and with added protection for law enforcement.

The official designations "M", "L" and "XL" are usually called Small, Medium and Large in Denmark.

In Denmark it is designated as Helmet, M/96, green.

In the early 1990s the Danish army began looking for a replacement to the old US M1 helmet designated M/46 Steel helmet, which had been the standard helmet in Denmark since World War 2. The M/96 helmet may be completely phased out very soon in favour of a version of the Gentex ACH.

The removable helmet cover allows to change the pattern of the camouflage. For instance, the Danish army uses three different covers:

The Canadian Forces adopted the SPECTRA with a few modifications. The CG634 Helmet was introduced in 1997 replacing the old M1 Helmet. The CF trialled the US Personnel Armor System for Ground Troops in 1990s before adopting the French version. The Canadian version is made by Barrday of Ontario (trial versions) and GSI (Gallet Sécurité Internationale) in Saint-Romuald, Quebec.

Spectra helmet, from the back, with the insignia of the French Foreign Legion

The Spectra helmet with electronic equipment of the Félin system 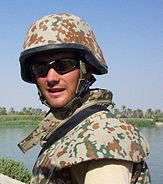 Anti-riot version as used by the Gendarmerie Mobile