These are the networks, also known as circuits, (or réseaux to their French participants) established in France by F Section of the British Special Operations Executive during the Second World War. See also SOE F Section timeline.

A network which was meant to be established by Frank Pickersgill[8] and John Kenneth MacAlister,[9] who were both captured in June 1943 immediately upon arrival in France. The network became an operation run by the Germans.

Joseph Placke, an assistant in the wireless section at 84 Avenue Foch, impersonated Pickersgill, and Macalister's captured radio and codes were used to transmit false messages to London, arranging parachute drops of supplies, which of course fell into German hands. The fake operation continued until May 1944 and resulted in the capture of a sabotage instructor and six other agents sent to join the network.

A network which was organised in the Paris area by Pierre de Vomécourt, but which had been destroyed by the spring of 1942 after being betrayed by Mathilde Carre.

A small network specialised in the economical and financial matters in view of the allied landing on D-Day. The French members were mainly businessmen, lawyers, bankers and engineers.

A network organised following the collapse of Autogiro and built on the remnants of Carte. It had small groups over the whole of France.

A network which was organised in the Lille area by Michael Trotobas.

An operation to organise aircraft landings and the reception of agents sent by such means.

A sub-circuit of the Physician network.

A network in the south-east

A sub-circuit of Physician, operating from Châlons-sur-Marne, east of Paris. It also had headquarters in the rue Cambon, near the Place de la Concorde. Also known as Robin.

A network in eastern Picardy.

An unofficial name for Physician, named for its organiser's codename.

An unofficial name for Juggler.

A network in the area of Bordeaux.

A network based in Montpellier.

A network with activities in the south and center of France, from Châteauroux to the foothills of the Pyrenees.

A network in the area of Toulouse.

A network with activities in the Valençay-Issoudun-Châteauroux triangle.

The map below shows the major SOE F Section networks which existed in France in June 1943, based on the map published in Rita Kramer's book "Flames in the Field" (Michael Joseph Ltd, 1995). 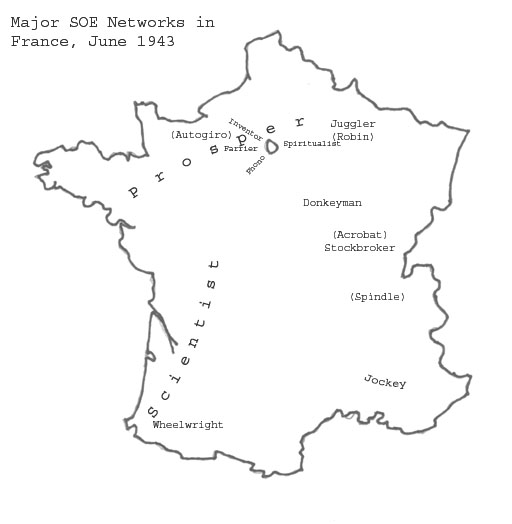 Note: The map does not show the correct location of the original Autogiro network, which operated in the Paris area and did not exist after the spring of 1942. However the network was later revived by Francis Suttill, organiser of Prosper.