SMS Braunschweig[lower-alpha 1] was the first of five pre-dreadnought battleships of the Braunschweig class in the German Kaiserliche Marine (Imperial Navy). She was laid down in 1901 and commissioned in October 1904, at a cost of 23,983,000 marks. She was named after the then Duchy of Brunswick (German language: Braunschweig). Her sister ships were Elsass, Hessen, Preussen, and Lothringen.

The ship served in the II Squadron of the German fleet after commissioning, though by the outbreak of World War I she had been moved to the IV Squadron. Braunschweig saw action in the Baltic Sea against the Russian Navy. In August 1915, the ship participated in the Battle of the Gulf of Riga, during which she engaged the Russian battleship Slava. In 1916, the ship was placed in reserve owing to crew shortages. She spent the remainder of World War I as a training ship, and after 1917, as a barracks ship for U-boat crews.

Under the terms of the Treaty of Versailles, she was retained after the end of the war and modernized in 1921–22. Braunschweig served in the reformed Reichsmarine as a coastal defense ship until 1926, when she was again placed in reserve. She was stricken in 1931 and subsequently broken up for scrap.

Braunschweig was laid down in 1901, at the Germaniawerft in Kiel under construction number 97. The first of her class, she was ordered under the contract name "H" as a new unit for the fleet. The ship cost 23,983,000 marks.[1] Braunschweig was launched on 20 December 1902 and commissioned into the fleet on 15 October 1904.[2]

Braunschweig's armament consisted of a main battery of four 28 cm (11 in) SK L/40 guns in twin gun turrets,[lower-alpha 2] one fore and one aft of the central superstructure.[3] Her secondary armament consisted of fourteen 17 cm (6.7 inch) SK L/40 guns and eighteen 8.8 cm (3.45 in) SK L/35 quick-firing guns. The armament suite was rounded out with six 45 cm (18 in) torpedo tubes, all mounted submerged in the hull.[2]

Upon commissioning in October 1904, Braunschweig was assigned to the II Division of the II Squadron of the German fleet. She was joined by her sister Elsass the following month; the II Division was rounded out by the old battleship Weissenburg. The German Navy in 1905 consisted of four divisions of three battleships each, with two divisions per squadron. This was supported by a cruiser division, composed of two armored cruisers and six protected cruisers.[2][4]

After the outbreak of World War I in 1914, Braunschweig was assigned to the IV Battle Squadron of the High Seas Fleet.[5] The squadron was commanded by Vice Admiral Ehrhard Schmidt.[6] In July 1915, following the loss of the minelaying cruiser SMS Albatross in the Baltic, the IV Squadron ships were transferred to reinforce the German naval forces in the area.[7] On 11 and 19 July, German cruisers, with the IV Squadron ships in support, conducted sweeps in the Baltic, though without engaging Russian forces.[8]

In August 1915, the German fleet attempted to clear the Gulf of Riga of Russian naval forces, in order to aid the German Army advancing on the city. The IV Squadron was joined by the I Squadron, which consisted of the eight Nassau and Helgoland-class battleships, from the High Seas Fleet, along with three battlecruisers and a host of smaller craft. The task force was placed under command of Vice Admiral Franz von Hipper, though operational command remained with Vice Admiral Schmidt.[8] On the morning of 8 August, the Germans made their initial push into the Gulf; Braunschweig and Elsass were tasked with engaging the Russian pre-dreadnought Slava and preventing her from disrupting the German minesweepers. However, when it became clear that the minesweepers could not clear the minefield before nightfall, Schmidt called off the attempt.[9] A second attempt was made on 16 August; this time, Braunschweig remained outside the Gulf while the dreadnoughts Nassau and Posen took over the task of dealing with Slava.[10] By 19 August, the Russian minefields had been cleared and the flotilla entered the Gulf. Reports of Allied submarines in the area, however, prompted the Germans to call off the operation the following day.[11]

On 12 October, the British submarine E18 fired a single torpedo at Braunschweig, though it failed to hit its target.[12] Due to manpower shortages, the IV Squadron ships were demobilized. In 1916, Braunschweig became a training ship. On 20 August 1917, she was transferred for use as a barracks ship stationed in Kiel.[2] In this role, the ship supported the III Submarine Flotilla.[13]

The Treaty of Versailles, which ended the war, specified that Germany was permitted to retain six battleships of the "Deutschland or Lothringen types."[14] Braunschweig was chosen to remain on active service with the newly reformed Reichsmarine.[2] The ship was modernized at the Kriegsmarinewerft in Wilhelmshaven from 1921–22.[1] In 1923, Braunschweig's bridge was rebuilt and enlarged.[2] She and Elsass, along with the Deutschland-class battleship Schlesien, were assigned to the North Sea Station.[15] The ship served with the fleet until 1926, when she was withdrawn from active duty and placed in reserve. On 31 March 1931, Braunschweig was stricken from the naval register and temporarily used as a hulk in Wilhelmshaven before being broken up for scrap.[2] 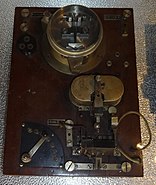 Morse device from the radio system of the SMS Braunschweig 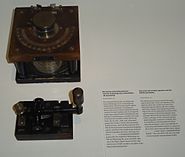 Morse key and variable capacitor from the SMS Braunschweig