SMArt 155 is a German 155 mm artillery round, designed for a long range, indirect fire top attack role against armoured vehicles. The SMArt carrier shell contains two submunitions, which descend over the battlefield on ballutes and attack hardened targets with explosively formed penetrator warheads. Built with multiple redundant self-destruct mechanisms, these submunitions were specifically designed to fall outside the category of submunition weapons prohibited by the 2008 Convention on Cluster Munitions.

SMArt was first deployed by the Bundeswehr in 2000, and has been sold to the armies of Switzerland, Greece, and Australia. 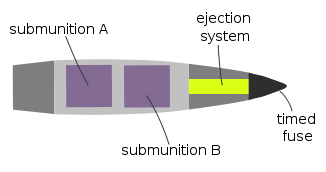 SMArt 155 is a 155 mm NATO artillery round designed to be fired from the Panzerhaubitze 2000 and the M109 howitzers, including the Paladin variant.[1] It consists of a 47-kilogram (104 lb) heavy artillery projectile containing two autonomous, sensor-fused, fire-and-forget submunitions.[1] The submunitions each contain a high-penetration EFP warhead for use against even heavy armoured armoured fighting vehicles like main battle tanks. The EFP warhead uses a heavy metal liner.[2]

After the submunition is released it opens a parachute. While slowly descending, the submunition rotates, scanning the area below with an infra-red sensor and a millimeter wave radar.[1][2]

The sensor system relying on several types of sensors give SMArt 155 the ability to be used in every type of terrain independent of the weather conditions.[3]

US artillery largely deploys the M712 Copperhead laser-guided direct-fire round for the anti-tank role. GIWS formed a partnership with US defence contractor Alliant Techsystems, hoping to sell SMArt 155 to the United States armed forces; to date no sale has been made.[5] The US developed the similar M898 SADARM system (which also descended on a ballute to attack the top surfaces of armoured vehicles), but this was discontinued in favour of the GPS guided M982 Excalibur round.

SMArt 155 is very similar to BAE Systems AB's BONUS-155 system; BONUS descends on a system of winglets rather than a parachute.

GIWS and its partners has also demonstrated SMArt to a number of other armies, including those of the United States, the United Arab Emirates[8] (for use in their existing G6 howitzer), Peru, and India.