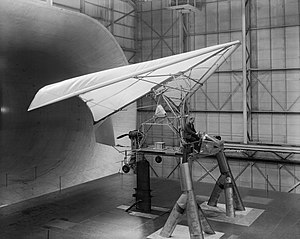 The XV-8 Flexible Wing Aerial Utility Vehicle (nicknamed Fleep, short for "Flying Jeep") was an improved version of the Flex-Wing. Both aircraft were built by Ryan Aeronautical Company in collaboration with NASA for the United States Air Force and the United States Army and tested in 1961 as a STOL patrol, reconnaissance and light utility aircraft to transport people or freight when a more specialized aircraft is not required or available.

The Fleep began as the Flex-Wing. The Flex-Wing had four-wheel landing gear, a smaller nose section behind which the pilot sat, and a single vertical tail/rudder, whereas the Fleep had tricycle landing gear, a larger nose section and a V tail/rudder. The wing was a fabric delta-shaped Rogallo wing with a fold-able frame; the wing was attached to a pod-like cockpit on a four-wheeled cargo platform. It was tested with two tail configurations — vertical fin and V-tail. The aircraft wing could be folded into a relatively small package for transport.[1][2][3][4][5]