The son of Charles Alphonse Vallée and Catherine Lynch, Rudy Vallée was born Hubert Prior Vallée in Island Pond, Vermont. His parents were born and raised in Vermont, but his grandparents were immigrants. The Vallées were Francophone Canadians from Quebec, while the Lynches were from Ireland. Vallée grew up in Westbrook, Maine.

In 1917, he enlisted for World War I but was discharged when United States Navy authorities discovered he was only 15 years old. He enlisted in Portland, Maine, on March 29, 1917, under the false birthdate of July 28, 1899. He was discharged at the Naval Training Station, Newport, Rhode Island, on May 17, 1917, with 41 days of active service.

After playing drums in his high school band, Vallée played clarinet and saxophone in bands around New England as a teenager. From 1924 through 1925, he played with the Savoy Havana Band at the Savoy Hotel in London, where band members discouraged his attempts to become a vocalist.[1] He returned to the United States, briefly attending the University of Maine. He received a degree in philosophy from Yale University, where he played in the Yale Collegians with Peter Arno, who became a cartoonist for The New Yorker magazine.[2]

After graduation, he formed Rudy Vallée and the Connecticut Yankees, having named himself after saxophonist Rudy Wiedoeft.[3] With this band, which included two violins, two saxophones, a piano, a banjo, and drums, he started singing. He had a thin, wavering tenor voice and seemed more at home singing sweet ballads than jazz songs. But his singing, suave manner, and boyish good looks attracted attention, especially from young women.[4] Vallée was given a recording contract, and in 1928 he started performing on the radio.

He became one of the first crooners.[4] Singers needed strong voices to fill theaters in the days before microphones. Crooners had soft voices that were suited to the intimacy of radio. Vallée's trombone-like vocal phrasing on "Deep Night" would inspire Bing Crosby, Frank Sinatra, and Perry Como to model their voices on jazz instruments.

Vallée was one of the first celebrity pop stars.[4] Flappers pursued him wherever he went.[4] His live appearances were usually sold out. Among screaming female fans, his voice failed to project in venues without microphones and amplification, so he often sang through a megaphone. A caricature of him singing this way was depicted in the Betty Boop cartoon Poor Cinderella (1934).[5] Another caricature is in Crosby, Columbo, and Vallee, which parodies him, Bing Crosby, and Russ Columbo.

At the microphone he is truly a romantic figure. Faultlessly attired in evening dress, he pours softly into the radio's delicate ear a stream of mellifluous melody. He appears to be coaxing, pleading and at the same time adoring the invisible one to whom his song is attuned.[6]

Vallée had his share of detractors as well as fans when his popularity was at its height. Radio Revue, a radio fan magazine, held a contest in which people wrote letters explaining his success. The winning letter, written by a man who disliked Vallee's music, said, "Rudy Vallee is reaping the harvest of a seed that is seldom sown this day and age: LOVE. The good-looking little son-of-a-gun really and honestly LOVES his audience and his art. He LOVES to please listeners—LOVES it more than he does his name in the big lights, his mug in the papers. He loved all those unseen women as passionately as a voice can love, long before they began to purr and to caress him with two-cent stamps."[7]

Vallée made his first records in 1928 for Columbia's low-priced labels Harmony, Velvet Tone, and Diva. He signed to RCA Victor in February 1929 and remained with the company through 1931, leaving after a heated dispute with executives over title selections. He then recorded for the short-lived Hit of the Week label which sold records laminated onto cardboard. In August 1932, he signed with Columbia and stayed with the label through 1933; he returned to RCA Victor in June 1933. His records were initially issued on Victor's low-priced Bluebird label until November 1933, when he was back on the Victor label. He remained with Victor until signing with ARC in 1936. ARC issued his records on the Perfect, Melotone, Conqueror and Romeo labels until 1937, when he again returned to Victor.

With his group the Connecticut Yankees, Vallée's best-known recordings include "The Stein Song" (a.k.a University of Maine school song) in 1929[8] and "Vieni, Vieni" in the latter 1930s.

His last hit record was a reissue of "As Time Goes By", popularized in the 1942 film Casablanca. Due to the mid-1940s recording ban, RCA Victor reissued the version he had recorded in 1931.[9] During World War II, he enlisted in the United States Coast Guard to help direct the 11th district Coast Guard band as a Chief Petty Officer. He was promoted to Lieutenant and led the 40 piece band to great success. In 1944 he was placed on the inactive list and returned to radio.[10]

According to George P. Oslin, Vallée on July 28, 1933 was the recipient of the first singing telegram. A fan telegraphed birthday greeting, and Oslin had the operator sing "Happy Birthday to You".[11][12][13] In 1995, a Golden Palm Star on the Palm Springs, California, Walk of Stars was dedicated to him.[14]

In 1929, Vallée began hosting The Fleischmann's Yeast Hour, a popular radio show with guests such as Fay Wray and Richard Cromwell in dramatic skits. Vallée continued hosting radio shows such as the Royal Gelatin Hour, Vallee Varieties, and The Rudy Vallee Show through the 1930s and 1940s.

When Vallée took his contractual vacations from his national radio show in 1937, he insisted his sponsor hire Louis Armstrong as his substitute[15] This was the first instance of an African-American hosting a national radio program. Vallée wrote the introduction for Armstrong's 1936 book Swing That Music. For his work in radio, Vallee was inducted into the Vermont Association of Broadcasters Hall of Fame in 2011.

In 1929, Vallée made his first feature film, The Vagabond Lover for RKO Radio. His first films were made to cash in on his singing popularity. While his initial performances were rather wooden, his acting greatly improved in the late 1930s and 1940s, and by the time he began working with Preston Sturges in the 1940s, he had become a successful comedic supporting player. He appeared opposite Claudette Colbert in Sturges's 1942 screwball comedy The Palm Beach Story. Other films in which he appeared include I Remember Mama, Unfaithfully Yours and The Bachelor and the Bobby-Soxer.

In 1955, Vallée was featured in Gentlemen Marry Brunettes, co-starring Jane Russell, Alan Young, and Jeanne Crain. The production was filmed on location in Paris. The film was based on the Anita Loos novel that was a sequel to her acclaimed Gentlemen Prefer Blondes. Gentlemen Marry Brunettes was popular throughout Europe at the time and was released in France as A Paris Pour les Quatre ("Paris for the Four"), and in Belgium as Tevieren Te Parijs.

Vallée performed on Broadway as J.B. Biggley in the 1961 musical How to Succeed in Business Without Really Trying and reprised the role in the 1967 film version.[16] He appeared in the 1960s Batman television show as the villain Lord Marmaduke Ffogg and in 1971 as a vindictive surgeon in the Night Gallery episode "Marmalade Wine".[17]

His fourth and last wife, Eleanor, wrote a memoir, My Vagabond Lover. Always loyal to Yale University, he never forgot his Maine roots, and maintained an estate at Kezar Lake in Maine.[18]

NBC announcer George Ansbro wrote in his memoir that Vallée "had quite a temper and a very foul mouth... Almost always the butt of his nastiness was the orchestra... his outbursts were mean-spirited, and he didn't care who overheard".[19] Alton Cook, however, wrote, "Rudy Vallee may be fuming at his orchestra, but a Vallee hour rehearsal never quite loses its air of being a gathering of old friends...Rudy is grimly serious about rehearsal. He sometimes has his band spend a quarter-hour going over one short passage that doesn't satisfy him. On those occasions his temper wears thin..."[20]

During his divorce from his second wife, Fay Webb, she alleged "Vallee is possessed of a violent, vicious and ungovernable temper, and given to the use of blasphemy and the use of intemperate, vile and vituperative language, particularly when applied to [her]". She accused him of committing adultery with three women, including actress Alice Faye. Vallée denied the allegations, and the judge found Vallée "not guilty of any misconduct or maltreatment of [Webb] which detrimentally affected [her] health, physical or medical condition".[21]

Vallée got into a fist fight with producer George White on the set of George White's Scandals. Dorothy Brooks wrote in 1936, "Other stars on the air have their troubles, their disagreements, and yet you don't read about their ending in black eyes. Only Rudy Vallee seems to figure in endings of this kind." In an interview with Brooks, Vallée claimed he found fighting "savage and stupid" and "the wrong way to try to solve problems, because it never solves them." When asked why he got into fights, he replied, "I just lost my temper. I'll admit I have a too-quick temper."[22]

Vallée died of cancer at his home on July 3, 1986, while watching the televised centennial ceremonies of the restored Statue of Liberty. His wife, Eleanor, said his last words were: "I wish we could be there; you know how I love a party."[23] 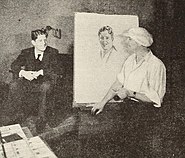 In the process of being painted by Rolf Armstrong on November 21, 1929

Advertisement for Old Gold Cigarettes with a fabricated biography

Caricature in the 1932 Merrie Melodies cartoon Crosby, Columbo, and Vallee; note the megaphone and the curl in his hair