Military Wiki
Register
Don't have an account?
Sign In
Advertisement
in: Pages with broken file links, Articles incorporating text from Wikipedia, Military units and formations established in 1919,
and 6 more

Shortly before the Axis invasion of Yugoslavia, the army staged a coup against the Serbian Yugoslav monarchy on March 26.

Beyond the problems of inadequate equipment and incomplete mobilization, the Royal Yugoslav Army suffered badly from the Serbo-Croat schism in Yugoslav politics. "Yugoslav" resistance to the invasion collapsed overnight. The main reason was that none of the subordinate national groups; Slovenes, Croats were prepared to fight in defence of a Serbian Yugoslavia. The only effective opposition to the invasion was from wholly Serbian units within the borders of Serbia itself.[2] In its worst expression, Yugoslavia's defenses were badly compromised on April 10, 1941, when some of the units in the Croatian-manned 4th and 7th Armies mutinied, and a newly formed Croatian government hailed the entry of the Germans into Zagreb the same day.[3] The Serbian General Staff were united on the question of Yugoslavia as a "Greater Serbia", ruled, in one way or another, by Serbia. On the eve of the invasion, there were 165 generals on the Yugoslav active list. Of these, all but four were Serbs.[4]

Formed after World War I, the Royal Yugoslav Army was still largely equipped with weapons and material from that era, although some modernization with Czech equipment and vehicles had begun. Of about 4,000 artillery pieces, many were aged and horse-drawn, but about 1,700 were relatively modern, including 812 Czech 37mm and 47mm anti-tank guns. There were also about 2,300 mortars, including 1600 modern 81mm pieces, as well as twenty four 220 and 305mm pieces. Of 940 anti-aircraft guns, 360 were 15 and 20mm Czech and Italian models. All of these arms were imported, from different sources, which meant that the various models often lacked proper repair and maintenance facilities.

The only mechanized units were 6 motorized infantry battalions in the 3 cavalry divisions, 6 motorized artillery regiments, two tank battalions equipped with 110 tanks, one of which had Renault FT-17s models of WW 1 origin and the other 54 modern French Renault R35 tanks, plus an independent tank company with 8 Czech SI-D tank destroyers. Some 1,000 trucks for military purposes had been imported from the United States of America in the months just preceding the invasion.[5]

Fully mobilized, the Royal Yugoslav Army could have put 28 infantry divisions, 3 cavalry divisions, and 35 independent regiments in the field. Of the independent regiments, 16 were in frontier fortifications and 19 were organized as combined regiments, or "Odred", around the size of a reinforced brigade. Each Odred had one to three infantry regiments and one to three artillery battalions, with three organised as "alpine" units. The German attack, however, caught the army still mobilizing, and only some 11 divisions were in their planned defense positions at the start of the invasion. The units were filled to between 70 and 90 percent of their strength as mobilization was not completed. The strength of the Royal Yugoslav Army was about 1,200,000 as the German invasion got underway.[6]

The Royal Yugoslav Army was organized into three army groups and the coastal defense troops. The 3rd Army Group was the strongest with the 3rd, 3rd Territorial, 5th and 6th Armies defending the borders with Romania, Bulgaria and Albania. The 2nd Army Group with the 1st and 2nd Armies, defended the region between the Iron Gates and the Drava River. The 1st Army Group with the 4th and 7th Armies, composed mainly of Croatian troops, was in Croatia and Slovenia defending the Italian, German (Austrian) and Hungarian frontiers.[5][7]

Along with other Yugoslav forces, the Royal Yugoslav Army surrendered on 17 April 1941 to an invading force of Germans, Italians, and Hungarians. Subsequently, a unit titled "1st Battalion, Royal Yugoslav Guards" was formed in Alexandria, Egypt. This unit saw action in north Africa with the 4th Indian Division but was later disbanded in Italy in 1944 as its strength dwindled and the unit was plagued by infighting between royalist and pro-Josip Broz Tito factions.[9] During 1943-44, 27 men made up the "No. 7 (Yugoslav) Troop" of the 10th (Inter-Allied) Commando, a special forces unit under British command. All Royal Yugoslav Forces were formally disbanded on March 7, 1945 when King Petar II's government was abolished in Yugoslavia. 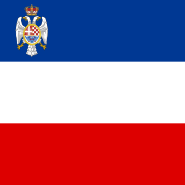 Standard of the rank of Army General.[12]

Standard of the rank of Division General.[12]

Standard of the rank of Brigade General.[12]