Between 2–5 August 1914 pre-war plans to establish harbour examination batteries and mobilise the then Royal New Zealand Artillery (active force) and New Zealand Garrison Artillery (territorials) were carried out.[2] The examination batteries' task was to interrogate unidentified vessels entering port. The examination batteries at Fort Takapuna, Point Gordon in Wellington, Fort Jervois and Howlett Point at the entrance to Port Chalmers were manned around the clock until 15 March 1915. After that date 'guns and equipment were maintained at a high state of readiness, with battery personnel available at a few hours' notice.'[2] During initial mobilisation for the First World War, it was intended that one six-gun 18-pounder battery would form part of the initial contingent of the New Zealand Expeditionary Force. Following large numbers volunteering for artillery, it was decided to raise the a brigade of three batteries, totalling twelve 18-pounders. The initial brigade departed with the rest of the Main Body on 16 October 1914.[3] Eventually two New Zealand field artillery brigades (regiment-sized units) served with the New Zealand and Australian Division.[4] Following the end of the war the New Zealand Artillery was renamed the Regiment of New Zealand Artillery.[1]

During the Second World War, 4, 5 and 6 Field Regiments sailed with the 2nd New Zealand Expeditionary Force; initially also despatched was 7 Anti-Tank Regiment and 14 Light Anti-Aircraft Regiment. A number of artillery regiments and batteries served with the 2nd New Zealand Expeditionary Force in the Pacific (2 NZEF IP), and 3rd Division.[citation needed] After the war ended, the Territorial Force was reconstituted in the late 1940s, and a number of field, mortar (5th Light Regiment RNZA), and coastal units were created.[5] In January 1947 the Regiment of New Zealand Artillery was amalgamated with the RNZA.[1]

When the Korean War broke out in June 1950, a Regular Force regiment, 16th Field Regiment RNZA, was established as the core of New Zealand's deployed contingent, known as Kayforce, in January 1951. The 16th Field Regiment subsequently provided close support to the British Commonwealth infantry and was later awarded the South Korean Presidential Unit Citation for its actions during the Battle of Kapyong in April 1951.[6] Between 1951 and 1953 the regiment fire more than 750,000 shells, operating 25-pounders.[7]

In 1955, the Regiment consisted of the following units:[8]

The 1957 National Government defence review directed the discontinuation of coastal defence training, and the approximately 1000 personnel of the 9th, 10th, and 11th Coastal Regiments had their Compulsory Military Training obligation removed. A small cadre of regulars remained, but as Henderson, Green, and Cook say, 'the coastal artillery had quietly died.'[10] All the fixed guns were dismantled and sold for scrap by the early 1960s. The three regiments survived on paper until 1967, 'each in its final years at an actual strength of a single warrant officer, the District Gunner, whose duties mainly involved taking care of the mobile 3.7-inch guns allocated for emergency harbour defences.'[11] In 1958 the Regiment was redesignated the Royal Regiment of New Zealand Artillery.[1] From 1963 Italian designed 105-mm L5 Pack Howitzers began replacing the 25-pounders.[7] 5th Light Regiment RNZA was disbanded in 1964.[citation needed]

A rotational RNZA battery was later deployed to South Vietnam during the Vietnam War, with the 161st Battery, Royal New Zealand Artillery first being attached to the 1st Battalion, Royal Australian Regiment in Bien Hoa following its commitment in 1965, and later operating as part of the 1st Australian Task Force in Phuoc Tuy Province. The battery subsequently took part in the Battle of Long Tan on 18 August 1966, during which it played a key role in supporting the outnumbered Australian infantry from D Company, 6 RAR hold off an regimental sized Viet Cong force.[12] In 1967 the battery's L5 howitzers were replaced by heavier and more robust American M2A2 Howitzers.[7] As Australian and New Zealand combat units began to be withdrawn in keeping with US troop reductions, the 161st Battery, RNZA was withdrawn in May 1971.[13]

In 1986 the British designed, Australian produced 105-mm L119 Hamel Light Gun was introduced, while computerized artillery systems were introduced in 1989, and global positioning systems in 1997, which resulted in a significant increase in capability.[7] 3rd Field Regiment RNZA was disbanded in 1990.[citation needed]

Today, the RNZA consists of a single regiment:

In addition, there are a number of Territorial Force artillery units; these were formerly units of the RNZA, but were moved into the structure of the TF battalion groups on the restructuring of the army in the late 1990s:

The Battle Honours of the above three Territorial Force artillery units are for South Africa, World War I and World War II.

A composite unit of the RNZA became the first specific New Zealand unit to mount the Queen's Guard at Buckingham Palace in 1964 (previously, the contingents sent to the Coronation had mounted the guard). 161 Battery was awarded both the United States Meritorious Unit Commendation and the South Vietnam Presidential Unit Citation for its service in the Vietnam War as part of the 1st Battalion Group, Royal Australian Regiment (see Non-U.S. recipients of U.S. gallantry awards).

The RNZA were distinguished by a blue and red puggaree around the traditional "Lemon Squeezer" hat of the New Zealand Army, until this headdress fell into abeyance in the late 1950s. It has subsequently been reintroduced for ceremonial use but the RNZA now wear the same red puggaree as most other corps and regiments. Artillery officers wore a dark blue jacket and trousers with red lapels and trouser stripes for mess dress but this is now being phased out in favour of a universal scarlet mess jacket for all branches of the Army. The traditional blue and red artillery colours still survive in the full dress of The Band Of The Royal Regiment Of New Zealand Artillery. 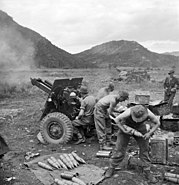