The Royal Canadian Chaplain Service (French language: Service de l'Aumônerie royale canadienne) is a personnel branch of the Canadian Armed Forces that has approximately 192 Regular Force chaplains and 145 Reserve Force chaplains[2] representing the Christian, Muslim and Jewish faiths. From 1969 to 2014 it was named the Chaplain Branch. It was renamed on October 16, 2014.[3]

The mission of this branch is to "support and enhance the effectiveness of the CF as a whole – its leadership, the individual men and women who serve and their families – through the provision of comprehensive religious and spiritual support, advice, and care."[4] The vision of the Chaplaincy is to "be an operationally relevant Chaplaincy that supports and cares for all CF personnel and their families, wherever they live and serve, empowering them spiritually and morally to meet the demands of military service."[5]

In accordance with their role, chaplains offer prayer services at home and abroad. Some services are inherently religious, such as Sunday worship, baptisms or religious funerals and burial at sea ceremonies. Other times, chaplains may offer a prayer for secular occasions such as base divisions, changes of command, mess dinners or ship commissioning ceremonies. Before offering prayers during parades and ceremonies, it is customary that the order to remove headdress be given to those on parade.[7] In November 2004, Court Martial Appeal Court of Canada ruled that this order was "not lawful"[8] since it unjustifiably required all attendees to show participation in a prayer that that may not believe. Following this ruling, non-believers are now permitted to retain their headdress, just like Jews and Sihks do in accordance with their faith.[9]

The Canadian Forces Chaplain School and Centre (CFChSC) in Borden, Ontario, is responsible for the training of all chaplains (Regular and Reserve, Protestant, Roman Catholic, Muslim and Jewish). CFChSC provides training in operational and static ministry. The training is provided with an operational focus and an interfaith approach. Courses are available in both official languages English and French. Courses include Chaplain Basic Officer Training, Ethics, Pastoral Counselling, Chaplains in Deployed Operations, Intermediate, Advanced, Chapel Life Coordinator (Protestant and Roman Catholic), and Ministry in a Pluralistic Environment.[10] CFChSC prepares military chaplains for service in times of peace and times of conflict. The Resource Centre contains a library relating to ministry, religion and related areas. The Chaplains provide ministry to Canadian Forces personnel and their families.

Since the amalgamation of the former Protestant and Roman Catholic Chaplaincies in the mid-1990’s into a single multi-faith Canadian Forces Chaplaincy, a joint annual retreat and seminar has been held. Consisting of seminars, business meetings and worship services, the annual retreat provides opportunities for the professional and spiritual development of chaplains and for fellowship as a Branch. The Annual Protestant Chaplain Branch Retreat and Seminar was held annually at the Royal Military College of Canada in Kingston, Ontario in the late 1980s and 1990s.[11]

On 24 September 2006, the Department of National Defence issued a press release indicating that, "[i]n order to better represent the diversity of Canadian society, and reflect the multi-faith nature of today’s chaplaincy", the current branch cap badge would be replaced with three new badges. The new badges would retain the crowned wreath of red maple leaves and central blue circle; the Maltese Cross behind the circle would be removed. On the circle would be "a different symbol for each faith tradition: for Christian chaplains, the Maltese cross, which has long been associated with Christian chaplaincy. Jewish chaplains will wear the symbol of the tablets of the Law and the Magen David (the star of David) and Muslim chaplains will wear the crescent." A scroll with the motto vocatio ad servitium would be placed below the circle.[2] These badges were approved by the Canadian Heraldic Authority on 15 March 2006.[3] 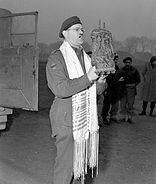 During a military-religious flag Consecration ceremony, Canadian Forces chaplains bless the Royal Military College of Canada Colours, which lean on top of a stack of College drums on a platform