Military Wiki
Register
Don't have an account?
Sign In
Advertisement
in: Articles incorporating text from Wikipedia, Royal Air Force, Flags of the United Kingdom,
and 2 more

The RAF Ensign was introduced in 1921 after some opposition from senior members of the Royal Navy. Various nations' air force ensigns have been based upon the RAF Ensign. Currently it is flown from the flagstaff of every Royal Air Force station during daylight hours and permanently displayed on the Cenotaph in London.

Ever since the formation of the RAF in 1918, the Air Council had wanted to introduce a flag which would be flown at RAF stations. However, the Admiralty had the right to veto the introduction of any new flag that was to be flown within the British Empire or on a British vessel. Although the Admiralty were initially opposed to granting the RAF its own flag, after considerable pressure from the Air Council, they reluctantly agreed to the introduction of such a flag, stating that the Air Force should adopt the Union Flag defaced with a suitable device. The Air Council did not welcome the Admiralty's condition, as they wished to use the White Ensign with the St George's Cross removed. Whilst the War Office had no objections to this proposed design, the Admiralty certainly did, and they rejected the Air Council's suggestion on the basis that the White Ensign was exclusively reserved for Royal Navy use.

The Air Council then submitted a design featuring a jack with a white border, but the Admiralty rejected this submission, as it was the already in use as the signal to summon a ship's pilot. The Air Council then re-submitted the original design which, unsurprisingly, was rejected once again.

When the situation came to the attention of King George V, he suggested that the matter be referred to the Cabinet. Although papers were drafted, the question was never debated in Cabinet.

The dispute soon became more widely known and various designs were suggested by members of the public. Although none of these suggestions were accepted, the idea that the Roundel (which had been used by both the Royal Flying Corps and the Royal Naval Air Service) might be adopted was viewed favourably by senior RAF commanders. Air Vice Marshal Sir John Salmond suggested that the Union Flag be placed in the canton in order that the design carry the mark of British authority. The Air Council subsequently agreed upon the design in use today as their preferred option. The Chief of the Air Staff, Air Marshal Sir Hugh Trenchard, then brought the design before King George V who approved the design. The design was then sent to the Admiralty and it was accepted as an Ensign in December 1920. On 24 March 1921, the King signed an Order in Council ratifying its use.

Use on the Cenotaph

Following the institution of the RAF Ensign in 1921, there were occasional suggestions that it should be flown on the Cenotaph. These suggestions were rejected, as the RAF Ensign had not been created until after the Great War, and RAF itself had only been established for the last seven months of the War. At this time a Union Flag, a White Ensign and a Red Ensign were flown on one side of the Cenotaph and a Union Flag, a White Ensign and a Blue Ensign were flown on the other side.

During February 1943, the Chief of the Air Staff, Air Chief Marshal Sir Charles Portal, succeeded in getting the informal agreement of Buckingham Palace that the RAF should be represented on the Cenotaph by the flying of RAF ensigns on either side of the monument. However, when this request was passed to the Prime Minister, Winston Churchill, he rejected the proposal, stating his opposition to any change. In order to make a second attempt at gaining the approval of the Prime Minister, the agreement of the First Lord of the Admiralty and the Secretary of State for War to the substitution of only one flag was secured. The also favoured the new proposal, and although the Prime Minister remained opposed to any change, he acceded to the will of the Cabinet.

The Admiralty requested that the substitution be done with no ceremony and only involve the minimum number of people necessary for the task. On 1 April 1943, exactly a quarter of a century after the foundation of the RAF, an RAF Ensign was substituted for the White Ensign on the west side of the Cenotaph, with the change being effected just after dawn. Later the same day at 1130 am, an RAF Regiment guard paraded at the Cenotaph and a wreath was placed underneath the RAF Ensign.[2]

Use on sea-going craft

During the 1920s and 30s the RAF Ensign was flown by vessels belonging to the RAF's seaplane squadrons. From 1939 until 1986, the sea-going craft of the Air Sea Rescue Service and its successor organisation, the Marine Branch, also displayed the Ensign.

Although the previously mentioned Order in Council gave the RAF the authority to display the Ensign as they saw fit, the Admiralty maintained that the Order did not supersede the regulations of the Merchant Shipping Act. In 1947 His Majesty's Customs and Excise took control of an RAF vessel on the basis that the RAF Ensign it displayed was illegal. After the incident, air force vessels continued to display the RAF Ensign.

The RAF Ensign is flown from the flagstaff of every Royal Air Force station during daylight hours. Ordinarily, it is hoisted and hauled down by the station's duty NCO and saluted by the station's orderly officer. The Ensign may also be hoisted or hauled down during a parade.

It is also flown daily from the Ministry of Defence building in Whitehall, London.[3]

The RAF Ensign may not be used as bunting or decoration, or draped over a coffin, except at civilian funerals. In the latter case, only the Union Flag may be used at a British military funeral.

The following ensigns have been derived from or influenced by the RAF Ensign: 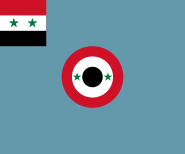