View source
This article is about the insignia/symbol. For other uses, see Roundel (disambiguation).

A roundel is a circular disc used as a symbol. The term is used in heraldry but also commonly used to refer to a type of national insignia used on military aircraft, generally circular in shape and usually comprising concentric rings of different colours. Other symbols also often use round shapes.

In heraldry, a roundel is a circular charge. Roundels are among the oldest charges used in coats of arms, dating from at least the twelfth century. Roundels in British heraldry have different names depending on their tincture.[2] Thus, while a roundel may be blazoned by its tincture, e.g., a roundel vert (literally "a roundel green"), it is more often described by a single word, in this case pomme (literally "apple", from the French) or, from the same origins, pomeis—as in "Vert; on a cross Or five pomeis".[3]

One special example of a named roundel is the fountain, depicted as a roundel barry wavy argent and azure, that is, containing alternating horizontal wavy bands of blue and silver (or white).

The French Air Service originated the use of roundels on military aircraft during the First World War.[1] The chosen design was the French national cockade, whose colours are the blue-white-red of the Flag of France. Similar national cockades, with different ordering of colours, were designed and adopted as aircraft roundels by their allies, including the British Royal Flying Corps and the United States Army Air Service. After the First World War, many other air forces adopted roundel insignia, distinguished by different colours or numbers of concentric rings.

Military aircraft insignia, such as that of the Philippine Air Force and the Polish szachownica, are often called roundels even when they are not round.[citation needed]

Flags for British overseas dependencies are often a British Blue Ensign defaced with a white roundel displaying the arms or badge of the dependency. The same pattern is used for some of the states of Australia. 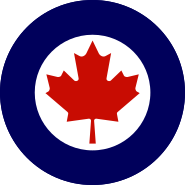 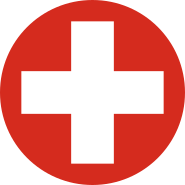 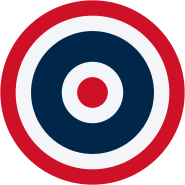 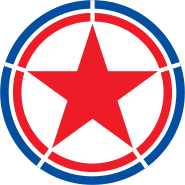 Some corporations and organizations make use of roundels in their branding. 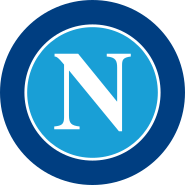