Due to the old age of the MIGs, the Romanian Air Force is considering procurement of new fighters, or possibly used fighters as an interim solution. Romanian Defense Minister Corneliu Dobritoiu said his country aims to buy an undisclosed number of second-hand F-16A/B jet fighters from Portugal. Earlier this year, local media reported that Romania sought to buy used F-16s from the Netherlands, but the plan was eventually scrapped. In March 2010, Romanian President Traian Basescu told local media the government was considering the purchase of 24 second-hand F-16s from the U.S. for about $1.3 billion.

In the spring of 2009, the Romanian government decided to purchase VSHORAD/SHORAD systems from France.[3] The deal included Mistral MANPADS and MICA VL surface-to-air missiles.[4] However, after preliminary talks with MBDA in August, the deal was put on hold and canceled afterwards because of the defense cuts.[5]

In February 2010, the Supreme Council of National Defense signed an agreement with the United States for missile defense under whose terms land-based SM-3 systems would be installed in Romania. On the 3rd of May 2011, the president of Romania Traian Băsescu announced the location for the SM-3 systems. They will be installed at the former Air Force base Deveselu in Olt County.[6] The system includes 3 batteries with 24 SM-3 Block I rockets, manned by approximately 200 US soldiers (with a maximum of 500) under Romanian Air Force overall command.

Romania was one of the first countries in the world to have an air force, starting with 1913. In 1912, the Romanian Air Force commissioned 10 Vlaicu I aircraft, built by Aurel Vlaicu in Bucharest.

During World War I, Romania acquired 322 aircraft from France and Great Britain including: Nieuport fighters (types 11, 17 12, 19, 21, 23, 24 and 28), Farman reconnaissance and light bombing aircraft (types 40 and 46), and Breguet-Michelin heavy bombers. On September 16, 1916, a Romanian Farman F.40 shot down an Imperial German Air Force aircraft near Slobozia; this was the first victory in the history of the Romanian Air Force. By the end of World War I, Romanian pilots had achieved about 11,000 hours of flight and fought 750 air battles.

During the interwar period, the RoAF, second only to Poland among the future Warsaw Pact countries, had a powerful national aircraft industry which designed and produced all types of military and most civil aircraft. In particular the IAR 80 series were stressed-skin fighters, worthy to rank with the other single-seat fighters of WWII, and used in significant numbers on the Eastern Front.

The RoAF was reorganized during an 18-year period. Over 2,000 military and civil aircraft were built in Romania, based on native or licensed designs. The military aviation used IAR 80 fighters, which became famous on the Eastern Front, and bombers manufactured by IAR Braşov. Messerschmitt Bf 109 and Heinkel He 112 fighters, Heinkel He 111 and Junkers Ju 88 bombers, Junkers Ju 87 dive bomber, Junkers Ju 52 transport and Heinkel He 114 seaplanes were purchased from Germany in the interwar period.

When Romania, allied with Nazi Germany, went to war against the USSR, on June 22, 1941, the Romanian Air Force had 621 airplanes, including its native made fighter IAR 80/81. The air force accomplished hundreds of missions, contributing to Romania's recapture of Northern Bucovina and Basarabia, which had been occupied by the Soviet Union a year earlier. Until the Odessa episode[Clarification needed], the Romanian military fighters gained 661 air victories. Romanian Military Aviation fought on the Eastern front until August 22, 1944, bringing an important contribution to the great battles in Stalingrad, Crimea, and the Ukrainian fronts. Between 1941-1944 Romanian aircraft won 2,000 air victories. The most famous flying aces were Captain Prince Constantin Cantacuzino, who gained 68 certified victories, Captain Horia Agarici and Captain Alexandru Şerbănescu, who shot down 60 enemy airplanes.

Starting with 1948, Romania tailored its military to Soviet concepts and doctrine. On February 15, 1949, the Aviation Command was established based on the Soviet model (regiments instead of flotillas). New Soviet aircraft, such as Yakovlev Yak-18, Polikarpov Po-2, Lavochkin La-9, Tupolev Tu-2, and Ilyushin Il-10 entered service. A year later, 77 Yakovlev Yak-17s and Yakovlev Yak-23s entered the air force, and in 1952, other 88 aircraft: MiG-15 and MiG-17. In 1958, the first supersonic fighter MiG-19 entered the inventory. Three years later, in February 1962, a new fighter was added to the inventory, MiG-21, which represented one of the most effective fighters of that time.

Starting with 1974, Romanian-made aircraft supplemented the already existing jets. The Romanian IAR-93 subsonic aircraft flew its first flight on 31 October 1974. It represented a great step forward taking into account that it was the only jet fighter not made by the Soviets, the only one ever manufactured and operated by a Warsaw Pact country.

In 1962, the first helicopter subunits were established and followed later on, in 1965, by the first Soviet Mi-2 and Mi-4 helicopters. Renewing the aircraft fleet process went on, the first 12 MiG-23s entering the service between July–September 1979.

On 14 May 1981, at 20:16, Soviet spaceship Soyuz-40 was launched from Baikonur to perform a common Romanian-Soviet flight, with Lieutenant Dumitru Prunariu and Colonel Leonid Popov as commander on board. During the early 80's 67th Fighter-Bomber Regiment and 49th Fighter-Bomber Regiment from Craiova and Ianca were equipped with new IAR-93 attack aircraft which have replaced old MiG-15s and MiG-17s. In December 1989, just a few days before the Romanian revolution against communism began, MiG-29 aircraft had entered the Air Force inventory.

Four MiG-21 LanceR Cs were deployed from August 2007 to November 2007 at Šiauliai, in Lithuania for Baltic Air Policing. The Romanian detachment succeeded the French Air Force Mirage 2000Cs of Escadron de Chasse 01.012 from Cambrai, which fulfilled the Baltic Air Policing since May 2007. Once the RoAF finished its three-month stint, a Portuguese Air Force detachment took over the mission.[7]

The four aircraft and most of the staff came from the 71st Air Base. A total of 67 personnel, among them nine pilots, were part of the detachment: 63 served at Šiauliai, while other four served at the air traffic control centre in Kaunas, to ensure smooth cooperation with local authorities. The Romanian detachment attracted attention from the local media, not least from the fact that it was only the second time a fighter from the Soviet era deployed to Šiauliai - Polish Air Force MiG-29s have also been deployed there in 2006.[8]

Three people were killed on November 7, 2007, when an IAR-330 Puma SOCAT attack helicopter belonging to the 90th Airlift Base crashed in Ungheni, near Piteşti, Argeş County. The aircraft was doing a night training mission at the moment of the crash.[9]

The Romanian Air Force Staff represents the military concept-developing, command and executive structure providing Air Forces peacetime, crisis and wartime leadership in order to reach, maintain and increase, as required, the operational level of the military subordinated structures so that to be able to operate under authorized commands responsible for military operations planning and conduct.

Generate, mobilize, structure, equip, operationalize and regenerate the required forces, provide the logistic support necessary to conduct military operations and based on higher orders, take over both the Joint Operation Air Component and independent air operations command and control, through the Main Air Operational Center. Starting with July 1, 2010, the Romanian Air Force bases were renamed to Air Flotillas.[10]

There are also 3 airfields included in the reserve forces.

Further information: List of aircraft of the Romanian Air Force

The Romanian roundel has the same colours as the Romanian flag. The innermost circle is blue, followed by yellow, and then red. It is placed on Romanian Armed Forces vehicles and Romanian Air Force aircraft. 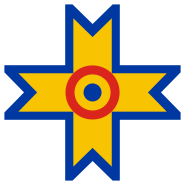 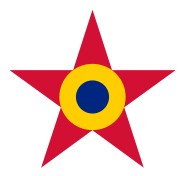 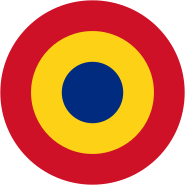