Two X-31s were built, with the first flying on October 11, 1990.[1] Over 500 test flights were carried out between 1990 and 1995. The X-31 is an early canard delta, a delta wing aircraft which uses canard foreplanes for primary pitch control, with secondary thrust-vectoring control. The canard delta had earlier been used on the Saab Viggen strike fighter, and has since become common on fighters such as the Eurofighter Typhoon, Dassault Rafale and Gripen. The X-31 featured a cranked-delta wing (similar to the Saab J35 Draken and F-16XL prototype), and fixed strakes along the aft fuselage, as well as a pair of movable computer-controlled canards to increase stability and maneuverability. There are no moveable horizontal tail surfaces, only the vertical fin with rudder. Pitch and yaw are controlled by the canard with the aid of the three paddles directing the exhaust (thrust vectoring). Eventually, simulation tests on one of the X-31s showed that flight would have been stable had the plane been designed without the vertical fin, because the thrust-vectoring nozzle provided sufficient yaw and pitch control.

During flight testing, the X-31 aircraft established several milestones. On November 6, 1992, the X-31 achieved controlled flight at a 70° angle of attack. On April 29, 1993, the second X-31 successfully executed a rapid minimum-radius, 180° turn using a post-stall maneuver, flying well outside the range of angle of attack normal for conventional aircraft. This maneuver has been called the "Herbst maneuver" after Dr. Wolfgang Herbst, an MBB employee and proponent of using post-stall flight in air-to-air combat.[2] Herbst was the designer of the Rockwell SNAKE, which formed the basis for the X-31.[3]

In the mid-1990s, the program began to revitalize and so the US and Germany signed a Memorandum of Understanding in April 1999 to start collaboration on the $53 million[citation needed] VECTOR program to capitalize on this previous investment. VECTOR is a joint venture that includes the US Navy, Germany’s defense procurement agency BWB, Boeing's Phantom Works, and DASA; it was initially expected to involve Sweden, who pulled out due to fiscal constraints.[4] As the site for the flight testing, Naval Air Station Patuxent River in Maryland was chosen. From 2002 to 2003, the X-31 flew extremely short takeoff and landing approaches first on a virtual runway at 5,000 feet in the sky, to ensure that the Inertial Navigation System/Global Positioning System accurately guides the aircraft with the centimeter accuracy required for on the ground landings. The program then culminated in the first ever autonomous landing of a manned aircraft with high angle of attack (24 degree) and short landing. The technologies involved a differential GPS System based on pseudolite technology from Integrinautics and a miniaturized flush air data system from Nordmicro.[citation needed] 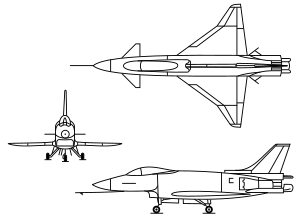