View source
watch 01:25
Jurassic World: Dominion Dominates Fandom Wikis - The Loop
Do you like this video?
Play Sound
Not to be confused with [[:{{{1}}}]].

The ship prefix for ROCN combatants is ROCS (Republic of China Ship); an older usage is CNS (Chinese Navy Ship).

The Navy CHQs (中華民國國防部海軍司令部) is subordinate to the General Staff, the Minister of Defense, and the ROC President.

The precursor to the modern ROC Navy was established as the Ministry of the Navy in the Provisional Government of the Republic of China in 1911 following the overthrow of the Qing dynasty. During the period of warlordism that scarred China in the 1920s and 1930s the ROCN remained loyal to the Kuomintang government of Sun Yat-sen instead of the warlord government in Beijing. During that time and throughout World War II, the ROCN concentrated mainly on riverine warfare as the poorly equipped ROCN was not a match to Imperial Japanese Navy over ocean or coast.[10]

Following World War II, a number of Japanese destroyers and decommissioned U.S. ships were transferred to the ROC Navy. During the Chinese Civil War, the ROCN was involved in the protection of supply convoys and the withdrawal of the ROC Government and over 1 million refugees to Taiwan in 1949. The subsequent reorganization and reestablishment of the Navy after evacuation to Taiwan is referenced in the lyrics of the post 1949 ROC Navy Song "The New Navy" (新海軍).

Following the relocation of the ROC government to Taiwan, the ROCN was involved in a number of commando attack escorts, evacuation and transport of more displaced soldiers and later to provide patrols and resupply operations to Kinmen and Matsu in the Taiwan Strait and South China Sea offshore islands.

Since the 1990s the Navy has grown in importance as the emphasis of the ROC's military doctrine moves towards countering a possible People's Republic of China (PRC) blockade, as well as offshore engagement. The ROCN has been working hard to expand its capability in electronic and anti-submarine warfare, as well as the replacement of its current antiquated fleet.[8] However local shipbuilder CSBC still lacks the technology to build modern submarines.[11]

Traditionally, most ROCN equipment is purchased from the United States, though several ships have been built domestically under licence or through domestic development. The ROCN has also purchased Lafayette-class frigates from France and Zwaardvis-class submarines from the Netherlands as well as four U.S. Kidd-class (renamed Keelung) destroyers originally intended for Iran.

Despite the ROCN refurbishing and extending the service life of its vessels and equipment, it has suffered from procurement difficulties due to pressures exerted by the PRC. It has only two useful submarines. The U.S. has approved sales of eight new diesel powered submarines but lacks the manufacturing capability to make the engines; at the same time, threats from the PRC prevent the necessary technology transfer from other countries. Furthermore, the Legislative Yuan did not approve the budget and thereby slowed the opportunity to procure the badly needed underwater defense capability.

In 2003 the US Government suggested buying four Nazario Sauro-class refurbished submarines from Italy, that reportedly agreed to sell them plus an additional four other submarines, following their decommissioning by the Italian Navy. However, Taipei rejected the offer, saying it wanted new submarines.

On 12 September 2007, an arms notification was sent to the United States Congress concerning an order for 12 P-3C Orion patrol aircraft and 3 "spare aircraft", along with an order for 144 SM-2 Block IIIA surface-to-air missiles.[12] A contract was awarded to Lockheed Martin to refurbish the 12 P-3C Orion aircraft for the ROC on 13 March 2009, with deliveries to start in 2012.[13]

In 2008, the ROCN set out to acquire an improved anti-ship capability. On 26 August, an arms notification was sent to Congress for an order for 60 air-launched Harpoon Block II missiles for the 12 P-3C.[14] At least a portion of these missiles will be installed on the navy's Hai Lung-class submarines.

On 31 August 2010, it was announced for next year's defense budget, ROCN planned to lease 1 or 2 more Newport-class tank landing ships (LST) from the United States, but the 900-ton stealth corvette plan was put on hold, due to lack of funds.[18] That same year, On 29 September, the U.S. Congress passed a resolution, authorizing the U.S. Government for the sale of 1 more Osprey-class minehunter to the ROC.[19]

Other ongoing local upgrade programs include locally designed and built Ching Chiang class of 12 patrol ships that were designed back in the 1990s to carry 4 HF-1 anti-ship missiles on board but only the lead ship of the class had them. Since 2006, 7 ships of this class were upgraded to carry 4 HF-2/3 with W-160 fire control radar from Wu Chin III program (as well as Honeywell H-930 MCS CDS stripped from 7 retired Yang class Wu Chin 3 anti-air warfare destroyers). In 2010 more ships of this class were undergoing this same upgrade program but using CSIST produced fire control radars instead. Currently 4 different variants exist within this class, the original Ching Chiang patrol ship constructed with 4 HF-1 (1 existing in this configuration).

On 29 December 2010, 2 LSTs (中肇、中治戰車登陸艦) and 4 remaining of Adjutant-class coastal minehunters were retired.[20]

On 15 April 2014, the Defence Minister Yen Ming announced that the United States will help Taiwan to build its own diesel-electric attack submarines (SSKs). Taiwan is looking to build eight submarines indigenously whilst also actively seeking to purchase diesel-electric submarines from other nations. The submarines would greatly improve the Navy's defensive capabilities.[23] It has been reported that in November 2014 Taiwan will announce a 20-year modernisation plan to replace the entire fleet. The plan is for four destroyers of 10,000 tons, 10–15 frigates of 3,000 tons, new amphibious ships and 4–8 submarines of 1,200–3,000 tons. The submarines may be built with a foreign partner but the surface ships would all be domestic designs.[24][25]

In April 2018, President of the United States Donald Trump approved the license necessary for American firms to sell Taiwan the technology needed to build its own submarines.[26]

In June 2018, two Oliver Hazard Perry-class frigates of the US Navy, ex-USS Taylor (FFG-50) and ex-USS Gary (FFG-51), were handed over to the Government of Taiwan for the Republic of China Navy. The transfer cost was an estimated US$177 million. The transfer of the ships includes the AN/SQR-19 Multi-Function Towed Array. Taiwan had previously been blocked from acquiring the AN/SQR-19, and the transfer of the system points to an anti-submarine focus in line with the Knox-class frigates they will likely replace.[27]

In July 2018, it was reported[28] that company from India and defense contractor from Japan have submitted design proposals for Indigenous Defense Submarine program[25] alongside two companies from America and another two from Europe.[29] 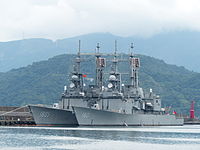 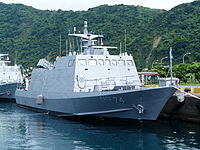 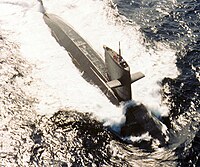 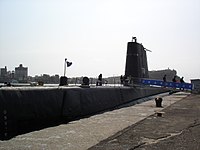 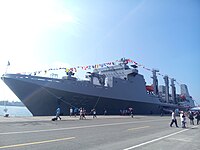 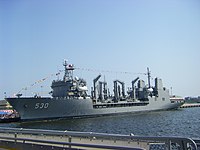 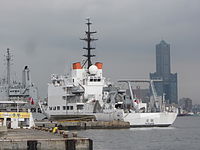 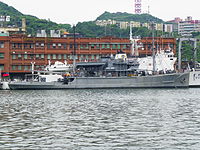