The Reign of Terror (5 September 1793 – 28 July 1794),[1] also known simply as The Terror (French language: la Terreur), was a period of violence that occurred after the onset of the French Revolution, incited by conflict between rival political factions, the Girondins and the Jacobins, and marked by mass executions of "enemies of the revolution". The death toll ranged in the tens of thousands, with 16,594 executed by guillotine (2,639 in Paris),[2] and another 25,000 in summary executions across France.[3]

The guillotine (called the "National Razor") became the symbol of the revolutionary cause, strengthened by a string of executions: King Louis XVI, Marie Antoinette, the Girondins, Philippe Égalité (Louis Philippe II, Duke of Orléans), and Madame Roland, and others such as pioneering chemist Antoine Lavoisier, lost their lives under its blade. During 1794, revolutionary France was beset with conspiracies by internal and foreign enemies. Within France, the revolution was opposed by the French nobility, which had lost its inherited privileges. The Roman Catholic Church was generally against the Revolution, which had turned the clergy into employees of the state and required they take an oath of loyalty to the nation (through the Civil Constitution of the Clergy). In addition, the First French Republic was engaged in a series of wars with neighboring powers intent on crushing the revolution to prevent its spread.

The extension of civil war and the advance of foreign armies on national territory produced a political crisis and increased the rivalry between the Girondins and the more radical Jacobins. The latter were eventually grouped in the parliamentary faction called the Mountain, and they had the support of the Parisian population. The French government established the Committee of Public Safety, which took its final form on 6 September 1793 in order to suppress internal counter-revolutionary activities and raise additional French military forces.

Through the Revolutionary Tribunal, the Terror's leaders exercised broad dictatorial powers and used them to instigate mass executions and political purges. The repression accelerated in June and July 1794, a period called la Grande Terreur (the Great Terror), and ended in the coup of 9 Thermidor Year II (27 July 1794), leading to the Thermidorian Reaction, in which several instigators of the Reign of Terror were executed, including Saint-Just and Robespierre.

After the resolution of the foreign wars during 1791–93, the violence associated with the Reign of Terror increased significantly: only roughly 4 percent of executions had occurred before November 1793 (Brumaire, Year I), thus signalling to many that the Reign of Terror might have had additional causes.[4] These could have included inherent issues with revolutionary ideology,[5] and/or the need of a weapon for political repression in a time of significant foreign and civil upheaval,[4] leading to many different interpretations by historians.

Many historians have debated the reasons why the French Revolution took such a radical turn during the Reign of Terror of 1793–94. The public was frustrated that the social equality and anti-poverty measures that the Revolution originally promised were not materializing. Jacques Roux's Manifesto of the Enraged in 25 June 1793 describes the extent to which, four years into the Revolution, these goals were largely unattained by the common people.[6] The foundation of the Terror is centered on the April 1793 creation of the Committee of Public Safety and its militant Jacobin delegates. The National Convention believed that the Committee needed to rule with "near dictatorial power" and the Committee was delegated new and expansive political powers[7] to quickly respond to popular demands.[8]

Those in power believed the Committee of Public Safety was an unfortunate, but necessary and temporary reaction to the pressures of foreign and civil war.[9] Historian Albert Mathiez argues that the authority of the Committee of Public Safety was based on the necessities of war, as those in power realized that deviating from the will of the people was a temporary emergency response measure in order to secure the ideals of the Republic. According to Mathiez, they "touched only with trepidation and reluctance the regime established by the Constituent Assembly" so as not to interfere with the early accomplishments of the Revolution.[10]

Similar to Mathiez, Richard Cobb introduced competing circumstances of revolt and re-education within France as an explanation for the Terror. Counter-revolutionary rebellions taking place in Lyon, Brittany, Vendée, Nantes, and Marseille were threatening the Revolution with royalist ideas.[11] Cobb writes, "the revolutionaries themselves, living as if in combat… were easily persuaded that only terror and repressive force saved them from the blows of their enemies."[12]

Terror was used in these rebellions both to execute inciters and to provide a very visible example to those who might be considering rebellion. Cobb agrees with Mathiez that the Terror was simply a response to circumstances, a necessary evil and natural defence, rather than a manifestation of violent temperaments or excessive fervour. At the same time, Cobb rejects Mathiez's Marxist interpretation that elites controlled the Reign of Terror to the significant benefit to the bourgeoisie. Instead, Cobb argues that "social struggles" between the classes were seldom the reason for revolutionary actions and sentiments.[13]

Francois Furet, however, argues that circumstances could not have been the sole cause of the Reign of Terror because "the risks for the Revolution were greatest" in the middle of 1793 but at that time "the activity of the Revolutionary Tribunal was relatively minimal."[14] Widespread terror and a consequent rise in executions came after external and internal threats were vastly reduced. Therefore Furet suggests that ideology played the crucial role in the rise of the Reign of Terror because "man's regeneration" became a central theme for the Committee of Public Safety as they were trying to instill ideals of free will and enlightened government in the public.[15] As this ideology became more and more pervasive, violence became a significant method for dealing with counter-revolutionaries and the opposition because, for fear of being labelled a counter-revolutionary themselves, "the moderate men would have to accept, endorse and even glorify the acts of the more violent."[16]

On 2 June 1793, Paris sections – encouraged by the enragés Jacques Roux and Jacques Hébert – took over the Convention, calling for administrative and political purges, a low fixed price for bread, and a limitation of the electoral franchise to sans-culottes alone. With the backing of the National Guard, they persuaded the Convention to arrest 29 Girondist leaders, including Jacques Pierre Brissot.[17] On 13 July the assassination of Jean-Paul Marat – a Jacobin leader and journalist known for his violent rhetoric – by Charlotte Corday resulted in a further increase in Jacobin political influence.

Georges Danton, the leader of the August 1792 uprising against the King, was removed from the Committee. On 27 July Maximilien Robespierre, known in Republican circles as "the Incorruptible" for his ascetic dedication to his ideals, made his entrance, quickly becoming the most influential member of the Committee as it moved to take radical measures against the Revolution's domestic and foreign enemies.[citation needed]

Meanwhile, on 24 June the Convention adopted the first republican constitution of France, the French Constitution of 1793. It was ratified by public referendum, but never put into force; like other laws, it was indefinitely suspended by the decree of October that the government of France would be "revolutionary until the peace".[citation needed]

On 5 February 1794 Robespierre stated, more succinctly that, "Terror is nothing else than justice, prompt, severe, inflexible."[19]

The result of this was policy through which the state used violent repression to crush resistance to the government. Under control of the effectively dictatorial Committee, the Convention quickly enacted more legislation. On 9 September the Convention established sans-culottes paramilitary forces, the revolutionary armies, to force farmers to surrender grain demanded by the government. On 17 September the Law of Suspects was passed, which authorized the charging of counter-revolutionaries with vaguely defined crimes against liberty. On 29 September the Convention extended price-fixing from grain and bread to other essential goods, and also fixed wages. The guillotine became the symbol of a string of executions: Louis XVI had already been guillotined before the start of the terror; Marie-Antoinette, the Girondists, Philippe Égalité, Madame Roland and many others lost their lives under its blade.[citation needed]

The Revolutionary Tribunal summarily condemned thousands of people to death by the guillotine, while mobs beat other victims to death. Sometimes people died for their political opinions or actions, but many for little reason beyond mere suspicion, or because some others had a stake in getting rid of them.[citation needed]

Among people who were condemned by the revolutionary tribunals, about 8 percent were aristocrats, 6 percent clergy, 14 percent middle class, and 72 percent were workers or peasants accused of hoarding, evading the draft, desertion, rebellion.[21] Maximilien Robespierre, "frustrated with the progress of the revolution,"[22] saw politics in a rather tyrannical way because "any institution which does not suppose the people good, and the magistrate corruptible, is evil."[23]

Another anti-clerical uprising was made possible by the instalment of the Revolutionary Calendar on 24 October. Hébert's and Chaumette's atheist movement initiated an anti-religious campaign in order to dechristianise society. The program of dechristianisation waged against Catholicism, and eventually against all forms of Christianity, included the deportation or execution of clergy; the closing of churches; the rise of cults and the institution of a civic religion; the large scale destruction of religious monuments; the outlawing of public and private worship and religious education; the forced abjurement of priests of their vows and forced marriages of the clergy; the word "saint" being removed from street names; and the War in the Vendée.[24]

The enactment of a law on 21 October 1793 made all suspected priests and all persons who harboured them liable to death on sight.[24] The climax was reached with the celebration of the goddess Reason in Notre Dame Cathedral on 10 November. Because dissent was now regarded as counter-revolutionary, extremist enragés such as Hébert and moderate Montagnard indulgents such as Danton were guillotined in the Spring of 1794. On 7 June Robespierre, who favoured deism over Hébert's atheism and had previously condemned the Cult of Reason, recommended that the Convention acknowledge the existence of his god. On the next day, the worship of the deistic Supreme Being was inaugurated as an official aspect of the Revolution. Compared with Hébert's somewhat popular festivals, this austere new religion of Virtue was received with signs of hostility by the Parisian public.[citation needed]

The End of the Reign[]

The repression brought thousands of suspects before the Paris Revolutionary Tribunal, whose work was expedited by the Law of 22 Prairial (10 June 1794). As a result of Robespierre's insistence on associating Terror with Virtue, his efforts to make the republic a morally united patriotic community became equated with the endless bloodshed. Finally, after 26 June's decisive military victory over Austria at the Battle of Fleurus, Robespierre was overthrown on 9 Thermidor (27 July).

The fall of Robespierre was brought about by a combination of those who wanted more power for the Committee of Public Safety, and a more radical policy than he was willing to allow, with the moderates who opposed the Revolutionary Government altogether. They had, between them, made the Law of 22 Prairial one of the charges against him, and after his fall, advocating Terror would mean adopting the policy of a convicted enemy of the Republic, endangering the advocate's own head. Robespierre tried to commit suicide before his execution by shooting himself, although the bullet only shattered his jaw. He was guillotined the next day.[25]

The reign of the standing Committee of Public Safety was ended. New members were appointed the day after Robespierre's execution, and term limits were imposed (a quarter of the committee retired every three months); its powers were reduced piece by piece.

This was not an entirely or immediately conservative period; no government of the Republic envisaged a Restoration, and Marat was reburied in the Pantheon in September.[26]

Nine emigrants go to the guillotine, 1793 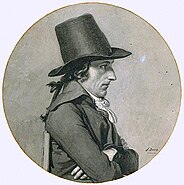 Portrait of André Antoine Bernard, one of the Jacobins responsible for the Reign of Terror