Ranks of the National People's Army 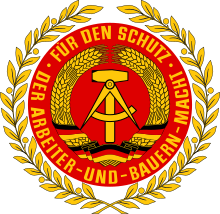 This article comprises the Ranks and rank insignias of the National People's Army (NPA), that was the Army of the German Democratic Republic (GDR) from 1956 to 1990.

The design of the rank insignias followed, with some modifications, the tradition of the German Wehrmacht. For example the cuff titles (chevron insignias) of the Gefreiter where replaced by cross-strips on the shoulder straps.

The shoulder straps of the lieutenant and captain ranks where made from silver satin string (de: Silberplattschnur). The Unterleutnant was characterized by one golden CO star, the Leutnant by two rank stars (side by side), and the Oberleutnant by tree stars, triangular mounted. Pertaining to Hauptmann there was an additional star above the triangular formation.

This article incorporates information from the equivalent article on this wikiNo language provided for the interwiki translation template!