Ramey Air Force Base is a former United States Air Force base in Aguadilla, Puerto Rico. It was named after Brigadier General. Howard Knox Ramey. In addition to some military Reserve Component activity from the U.S. Army Reserve and, the Puerto Rico Army and Air National Guard, a portion of the former Air Force Base is operated by the United States Coast Guard as Coast Guard Air Station Borinquen. Many Federal law enforcement agencies have presence at the former Ramey base and here is also civilian general aviation use of the airfield, now known as Rafael Hernandez International Airport.

Origins of this air force base go back to 1936, when the necessity for an air base in Puerto Rico was recognized and advocated by United States Army Air Corps officials as a logical extension of the air defenses of the Panama Canal and of Puerto Rico itself. The Commandant of the Air Corps Tactical School forwarded to the Chief of the Air Corps a report describing Puerto Rico as a "most valuable asset" for national defense and recommending establishment of an Army Air Base on the island.

In 1939, the Army sent Major George C. Kenney to Puerto Rico to conduct a preliminary survey of possible air base sites. He examined a total of 42 sites and declared that Punta Borinquen the best site for a major air base. Planted sugar cane farms covered some 3796 acres that the government purchased for military use on the first week of September 1939 at a cost of $1,215,000. Later that year, Major Karl S. Axtater assumed command of what was to become Borinquen Army Air Field. In a less than auspicious arrival, Axtater landed the first aircraft ever at the still crude, unprepared runway of Borinquen and blew the tire on the tail wheel of the plane, but no serious damage or injury resulted. The 27th Bombardment Squadron arrived from Langley Field, Virginia, in late 1939 with nine B-18A Bolo medium bombers as the first squadron based at Borinquen Field. 417th Bombardment Squadron arrived on 21 November 1939. In 1940, the air echelon of the 25th Bombardment Group (14 B-18A aircraft and two A-17 aircraft) arrived at the base from Langley Field. After 1 November 1940, the base served as headquarters of 25th Bombardment Group. On 13 December 1940, the "tempest-in-a-teapot" "Battle of Borinquen Field" took place. Strictly a misnomer, the "battle" consisted solely of an "alert" and nervous guards firing machine guns against a "non-existent enemy invasion force", in reality a friendly merchant vessel traveling inshore for protection. The "battle" lasted 15 minutes, and in the confusion, one woman was wounded.

During World War II, the following squadrons were assigned to the airfield:

Following World War II, the Air Force significantly expanded Ramey Air Force Base for its new role as a Strategic Air Command (SAC) bomber base. 1950–1953 (55th Strategic Reconnaissance Wing, Medium) (RB-50)(KB-29) 1953–1955 (72nd Strategic Reconnaissance Wing, Heavy), (B-36 Peacemaker) was established at Ramey AFB during 1953. The 72nd did not become operational until the last elements of the 55TH SRW were absorbed by the newly established wing. (72d Bombardment Wing, Heavy) In 1959, the 72d Bombardment Wing transitioned to the B-52 Stratofortress and Ramey served as a B-52 and KC-135 Stratotanker base until mid-1971.

Throughout 1972, Ramey AFB deactivated and the various units readied for closure. Some groups transferred out intact, while others gradually were phased out. The Air Force controlled the base until early 1974, when all remaining active units were dissolved. The Base had been formally closed in 1973. The main installation of Ramey AFB consisted of 3,139.55 acres. In February, 1974, the bulk of Ramey AFB proper (3,138 acres) was declared excess by the General Services Administration (GSA). In July, 1974, the Air Force transferred 303 acres to the Navy. Of the remaining 257 acres, the Navy transferred 57+ acres to the Army, and 129 acres to the Coast Guard. In December 1974, the Air Force transferred 21 acres of land to the Coast Guard, which still utilizes the area.

Closing and current use 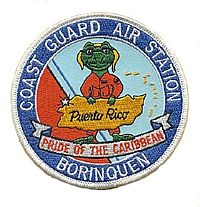 In 1973, Ramey AFB was closed by the Air Force as an active Air Force Base, part of a post-Vietnam War reduction-in-force (RIF) that closed-down numerous Air Force Bases. In the late 1970s the base was given to the town of Aguadilla for its care. During the late 1970s and early 1980s most of the old military housing area was sold off to the general public. A few base buildings were converted into government agencies. The base old military hospital was converted into a three star hotel and now is one of the most visited hotels on the west side of the island.

As it was before the Air Force's departure, the primary mission of Coast Guard Air Station Borinquen remains search & rescue. Secondary missions include law enforcement, aerial support for ATON, and logistic support. To accomplish these missions, the Air Station has now four HH-65A Dolphin helicopters as well as periodically hosting Coast Guard HC-130H/J Hercules and HU-25 Falcon aircraft normally based at other Coast Guard Air Stations.

CGAS Borinquen consists of two runways (the primary runway, 11,700 feet (3,600 m) long, is still maintained), a very large former B-52 heavy bomber dispersal parking area, and numerous ramps & hangars – many of which are currently in a state of disrepair.

The U.S. Department of Homeland Security federal law enforcement agencies have a very significant presence in the area such as the U.S. Customs and Border Protection, The U.S. Border Patrol Ramey Sector at 722 Belt St conduct operations from the former Air Force base. The U.S. Bureau of Immigration and Customs Enforcement Immigration Detention Center is located at 505 Gun Road. A Federal Bureau of Investigation field office is also at Ramey.

The Ramey AFB Historical Association is an organization formed to preserve the rich history of the former Ramey AFB, Aguadilla, Puerto Rico. The Borinquen Field -Ramey AFB Museum was established in 2007 for the purpose of pursuing the Ramey AFB Historical Association objectives: To promote the historical significance of Borinquen Field – Ramey AFB as it existed between 1939 and 1973 and maintain a repository and place of safekeeping for documents, photographs, items and remembrance of Borinquen Field / Ramey AFB as it existed between 1939 and 1973. The Ramey Historical Association also gatther reunions for Ramey AFB Veterans and their families. National veterans organizations can be foud at the former Air Force installation such as The American Legion Mayor Rafael Sanchez Saliva, Post 150 Aguadilla, PR and Military Order of the Purple Heart – Chapter 660 located at 506 Gun RD. Some military retirees settled in the Ramey area because of the golf course, post exchange and other facilities they are entitled to use at U.S. Coast Guard Air Station Borinquen and at Punta Borinquen Radar Station.

Is an airport located at the former Air Force Base in Aguadilla, Puerto Rico. It is named after the Puerto Rican composer Rafael Hernández Marín. The airport is the second international airport in Puerto Rico in the region of Porta del Sol, Puerto Rico's west coast. In 1988, Rafael Hernández Airport started to surface as an alternative to Luis Muñoz Marín International Airport, when Carnival Air Lines and ATA began jet services. In the 1990s, American Airlines joined those two airlines. Later on, Pan Am and TWA also came.

In 2000, North American Airlines re-opened passenger service with a non-stop flight to New York-JFK three times a week. Later on Continental Airlines joined North American with a daily flight to their hub in Newark. The evident success of service from the Aguadilla, caught the attention of Boston-Maine Airways that opened a route to Orlando-Sanford and Santo Domingo.

Rafael Hernandez Airport continued expanding for the next several years with addition of Jet Blue Airways with 2 daily flights to New York-JFK and Orlando, Florida. Delta Air Lines Connection began regional jet service to Atlanta, Georgia five times a week. Spirit Airlines began service from the airport to their hub in Fort Lauderdale, Florida with a flight five times a week during the summer.

In 2007, The Rafael Hernandez Airport control tower was renovated. By the low season of 2007 there were 59 flights per week, 1 daily flight to New York, 1 to Newark and Orlando and a flight 5 times per week to Ft. Lauderdale. FedEx also has a terminal at this airport.

The Governor of Puerto Rico, Luis Fortuño, announced at the International Fair of Tourism, in Madrid, that charter flights to the Spanish cities of Madrid and Barcelona will commence on March 2011. The flights will begin in a weekly basis for a period of 6 months with goals of permanent service to the European cities. The flight to Madrid will be on Saturdays, while the one to Barcelona will be on Sundays. They will be on a Boeing 767 with capacity for 214 passengers in a 18/196 configuration.

The University of Puerto Rico at Aguadilla offers Bachelor Degrees in Science in Environmental Technology, Bachelor of Arts in Education with a concentration in English and multimedia technology, Bachelor in Business Administration with concentrations in human resources, Computerized Information Systems, Accounting, Marketing and Finances and Bachelor of Science in Biology with emphasis in Bioinformatics and Biomedical Quality Systems Assessment Process Industries.

Marriott International opened a Courtyard by Marriott brand hotel at the former Ramey Air Force Base Hospital building at West Parade/Belt Road. This hotel has a casino and many facilities such as 4 restaurants, Bars, Game Room, Fitness Center and Pools with Aquatic Playground.