Military Wiki
Register
Don't have an account?
Sign In
Advertisement
in: All articles needing coordinates, Articles incorporating text from Wikipedia, Forts in Maharashtra,
and 2 more

Rajgad (literally meaning Royal Fort) is one of the forts in the Pune district of Maharashtra state in India. The fort is 1318 meters above sea level.

Formerly known as Murumdev, it was capital of the Maratha Empire (Hindavi Swarajya) ruled by Chhatrapati Shivaji Maharaj for almost 26 years, after which he moved to Raigad Fort and made that his capital.

Treasure found at an adjacent fort was used to fortify this hill.

The big fort is 42 km to the south west of Pune, about 15–16 km west of Nasrapur, in the Sahyadris range.

This is the highest part of the fort which has remains of palaces, water cisterns and caves. It has an entrance door called Mahadarwaja. One can view the whole fort and the vast surrounding expanse.

This fort is built on the hill called "Murumba Devicha Dongar" Rajgad boasts the highest number of days stayed by Chhatrapati Shivaji Maharaj on any fort.

This fort has witnessed lots of historic events, including the birth of Rajaram Chhatrapati, the death of Shivaji's Queen Saibai, the return of Shivaji from Agra, the antyayatra of Tanaji Malusare to his Konkan village, the burial of Afzal Khan's head in the Mahadarwaja walls of Ballekilla, the strict words of Sonopant Dabir to Shivaji, and the Khandoji Khopade episode.

This fort was also one of the 12 forts that Shivaji kept when he signed the Treaty of Purandar (1665) with the Rajput king Jai Singh in 1665 who was leading the Mughal forces. 22 other forts were handed over to the Mughals under this treaty.[1]

The diameter of the fort at the base is 40 km making it difficult for anybody to lay siege to it.

A.D 1626: During the Nizam's last struggle, Adilshah captured the fort.

A.D 1630: Due to Shahajiraje, fort was again captured by Nizamshahi.

A.D 1642: This fort was included in Shahajiraje's jagir.

A.D 1649: The repairing of the fort started and Shamrao Neelkanth Ranzekar was appointed as the Prime Minister of Swaraj.

A.D 1652: The administration of Swaraj was started.

A.D 1654: New type of fortification's and other buildings' construction was started. The fort renamed as 'Rajgad'.

A.D 1660: To raise Siddi Jouhar's siege, Jijamata started with the army but actually Netaji Palkar and Siddi Hilal were sent.

A.D July 1660: Maharaj escaped from Siddi Jouhar's siege, came to Vishalgad and then to Rajgad.

A.D July 1661: The idol of Bhavanimata, which was to be established in Pratapgad, was first brought to Rajgad for Jijamata's sight.

A.D January 1662: The construction of the fort is completed and Maharaj returned to the fort after capturing Pen and Kalyan.

A.D 6 April 1663: After Shaistakhan's raid, Maharaj went to Kondana and then to Rajgad.

A.D February 1664: The booty of Surat was brought to Rajgad.

A.D 30 April 1665: The unsuccessful attack of the Mughals on the fort.

A.D June 1689: After the murder of Sambahji Maharaj, the fort was captured by the Mughals.

A.D 1692: Shankarji Narayan captured the fort from the Mughals.

A.D 1697: After Rajaram Maharaj returned to Maharashtra, he made Rajgad as his new capital.

A.D 4 August 1701: Shahaji Mohite was given the havaldari of Padmavati machi.

A.D 18 February 1704: According to a treaty, Aurangzeb was given the fort and he renamed the fort as 'Nabishahagad'. Santaji Shilimkar and Sidoji Thopte were killed here by Aurangzeb.

A.D 29 May 1707: Gunaji Sawant captured the fort and The Maratha War of Independence ended.

A.D 1709: Chhatrapati Shahu Maharaj made provisions for the repairing of the fort.

A.D 1818: Like other fort, this one also passed into the hands of the British.

This fort is a significant site for trekkers and adventurous tourists to visit. Accommodation for 50 people is available in Padmavati Mandir. Water tanks provide water all over the year.

Another route from Budhla Machee of Torna comes through a connecting ridge to Alu Darwaja on Sanjeevani Machi. 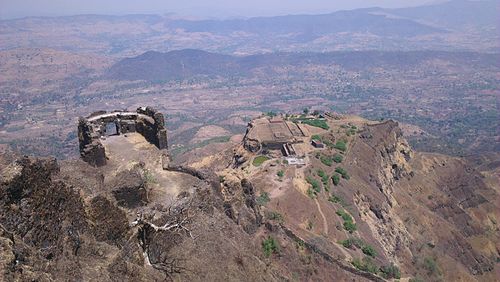