The RUR-4 "Weapon Alpha" (originally Weapon Able) was an American naval ahead-throwing ASW rocket launcher. It was designed between 1946 and 1949 and was installed on warships from 1951 to 1969. It was designed to attack enemy submarines without requiring the attacking ship to be located directly above the submarine being attacked.

It was replaced by ASROC (RUR-5), which was developed by U.S. Navy in the 1950s. Nonetheless, Weapon Alpha remained in service through the 1960s until supplanted by ASROC.[2] 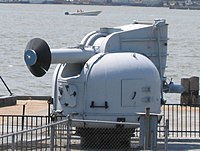 A dismounted Mk 108 launcher at the Intrepid Sea-Air-Space Museum.