RMS Carpathia was a Cunard Line transatlantic passenger steamship built by Swan Hunter & Wigham Richardson. Carpathia made her maiden voyage in 1903 and became famous for rescuing the survivors of RMS Titanic after the latter ship hit an iceberg and sank on 15 April 1912. Carpathia herself was sunk in the Atlantic on 17 July 1918 during the First World War, after being torpedoed by an Imperial German Navy U-boat.

Carpathia made her maiden voyage on 5 May 1903 from Liverpool, England, to Boston, USA, and ran services between New York City, Gibraltar, Genova, Naples, Trieste and Fiume.

Carpathia was sailing from New York City to Fiume, Austria-Hungary (now Rijeka, Croatia) on the night of Sunday, 14 April 1912. Among her passengers were the American painters Colin Campbell Cooper and his wife Emma, journalist Lewis P. Skidmore, photographer Dr. Francis H. Blackmarr, and Charles H. Marshall, whose three nieces were travelling aboard Titanic.

Carpathia's wireless operator, Harold Cottam, had missed previous messages from Titanic, as he was on the bridge at the time.[1] He then received messages from Cape Race, Newfoundland, stating they had private traffic for Titanic. He thought he would be helpful and at 12:11 am on 15 April sent a message to Titanic stating that Cape Race had traffic for them. In reply he received Titanic's distress signal.[1] Cottam awakened Captain Arthur Henry Rostron who immediately set a course at maximum speed (17 kn (20 mph; 31 km/h)) to Titanic's last known position, approximately 58 mi (93 km) away. Rostron ordered the ship's heating and hot water cut off in order to make as much steam as possible available for the engines.[citation needed] At full speed it took the Carpathia four hours to reach Titanic, while Titanic only stayed afloat for two hours and sank before Carpathia arrived. At 4:00 am, Carpathia arrived at the scene, after working her way through dangerous ice fields, and took on 705 survivors of the disaster from Titanic's lifeboats.[1]

For their rescue work, the crew of Carpathia were awarded medals by the survivors. Crew members were awarded bronze medals, officers silver, and Captain Rostron a silver cup and a gold medal, presented by Margaret Brown. Rostron was knighted by King George V, was later a guest of President Taft at the White House, where he was presented with a Congressional Gold Medal, the highest honour the United States Congress could confer upon him.[citation needed]

Service in World War I

During the First World War, Carpathia was used to transfer Canadian and American troops to Europe. She was used as a troopship by the Canadian Expeditionary Force.[2] At least some of her voyages were in convoy, sailing from New York through Halifax to Liverpool and Glasgow.[3] Among her passengers during the war years was Frank Buckles, who went on to become the last surviving American veteran of the war.

On 15 July 1918, Carpathia departed Liverpool in a convoy bound for Boston. On the summer morning of 17 July she was torpedoed, at 9:15, in the Celtic Sea by the Imperial German Navy submarine U-55. Of three torpedoes fired at the ship, one impacted the port side while the other penetrated the engine room, killing two firemen and three trimmers.[4] As Carpathia began to settle by the head and list to port, Captain William Prothero gave the order to abandon ship. All 57 passengers (36 saloon class and 21 steerage) and 218 surviving crew members boarded the lifeboats as the vessel sank.[4] U-55 surfaced and fired a third torpedo into the ship and was approaching the lifeboats when the Azalea-class sloop HMS Snowdrop arrived on the scene and drove away the submarine with gunfire before picking up the survivors from Carpathia.

On 9 September 1999, the Reuters and AP wire services reported that Argosy International Ltd., headed by Graham Jessop, son of the undersea explorer Keith Jessop, and sponsored by the National Underwater and Marine Agency, had discovered Carpathia's wreck in 600 ft (180 m) of water, 185 mi (298 km) west of Land's End.[5] Bad weather forced his ship to abandon the position before Jessop could verify the discovery using underwater cameras. However, when he later returned to the location the wreck proved to be not that of Carpathia but that of the Hamburg-America Line's Isis, sunk on 8 November 1936.[6]

In 2000, the American author and diver Clive Cussler announced that his organisation, NUMA, had found the true wreck of Carpathia in the spring of that year,[7][8] at a depth of 500 ft (150 m).[9] After the submarine attack Carpathia landed upright on the seabed. NUMA gave the approximate location of the wreck as 120 mi (190 km) west of Fastnet, Ireland.[10]

The vessel is currently owned by Premier Exhibitions Inc., formerly RMS Titanic Inc., which plans to recover objects from the wreck.[9] The same company owns the salvor-in-possession rights of Titanic, from which many artifacts have been recovered and are on display in worldwide exhibitions.[citation needed] 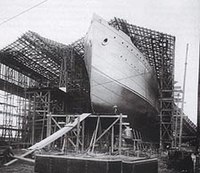 The grey-painted hull of Carpathia rests on the slipway, awaiting launch.

Rare on-deck photo of Carpathia passengers (circa 1914) unconnected with the Titanic disaster.