The Bendix RIM-8 Talos was a long-range naval surface-to-air missile, and was among the earliest surface-to-air missiles to equip United States Navy ships. The Talos used radar beam riding for guidance to the vicinity of its target, and semiactive radar homing (SARH) for terminal guidance. The array of four antenna which surround the nose are SARH receivers which functioned as a continuous wave interferometer. Initial thrust was provided by a solid rocket booster for launch and a Bendix ramjet for flight to the target with the warhead serving as the ramjet's compressor.

Talos was the end product of Operation Bumblebee, the Navy's 16-year surface-to-air missile development program for protection against guided anti-ship missiles like Henschel Hs 293 glide bombs, Fritz X, and kamikaze aircraft.[1] The Talos was the primary effort behind the Bumblebee project, but was not the first missile the program developed; the RIM-2 Terrier was the first to enter service. The Talos was originally designated SAM-N-6, and was redesignated RIM-8 in 1963. The airframe structure was manufactured by McDonnell Aircraft in St. Louis; final assembly was by Bendix Missile Systems in Mishawaka, Indiana.

The Talos saw relatively limited use due to its large size and dual radar antenna system; there were few ships that could accommodate the large missiles with the AN/SPW-2 missile guidance radar and the AN/SPG-49 target illumination and tracking radar.[2] The 9.9-meter-long, 3½-tonne missile was similar in size to a fighter aircraft.[3] The Talos Mark 7 Guided Missile Launching System (GMLS) was installed in three Galveston-class cruisers (converted Cleveland-class light cruisers) with 16 missiles in a ready-service magazine and up to 30 missiles and boosters in a storage area above the main deck. Nuclear-powered USS Long Beach and three Albany-class cruisers (converted Baltimore-class heavy cruisers) carried Mark 12 Guided Missile Launching Systems fed from a 52-round magazine below the main deck.[4]

The initial SAM-N-6b/RIM-8A had an effective range of about 50 nm, and a conventional warhead. The SAM-N-6bW/RIM-8B was a RIM-8A with a nuclear warhead; terminal guidance was judged unnecessary for a nuclear warhead, so the SARH antenna was omitted. The SAM-N-6b1/RIM-8C was introduced in 1960 and had double the range, and a more effective conventional continuous-rod warhead. The RIM-8D was the nuclear-warhead version of the -8C. The SAM-N-6c/RIM-8E "Unified Talos" had a warhead that could be swapped while embarked, eliminating the need to waste magazine capacity carrying dedicated nuclear-tipped variants. The RIM-8E also carried an improved continuous-wave terminal homing seeker, and had a higher ceiling reach-out. Some RIM-8Cs were retrofitted with the new seeker, and designated RIM-8F. The RIM-8G and RIM-8J had further radar homing improvements and a new fuel that extended the range to 130 nm.[5]

The surface-to-air versions also saw action in Vietnam, a total of four MiGs being shot down by Chicago and Long Beach. On May 23, 1968, a Talos fired from USS Long Beach shot down a Vietnamese MiG at a range of about 65 miles. This was the first downing of a hostile aircraft by a missile fired from a ship. The hit also destroyed a second MiG which flew through the debris. In September 1968 Long Beach scored another MiG destroyed at a range of 61 miles. On May 9, 1972 Chicago's forward Talos battery scored a long-range kill on a MiG.[6] The Talos missile also had surface-to-surface capabilities.[7]

The RIM-8H Talos-ARM was a dedicated anti-radar homing missile for use against shore-based radar stations. Initial testing of the RIM-8H was performed in 1965, and soon after it was deployed in Vietnam on Chicago, Oklahoma City, and Long Beach, attacking North Vietnamese SAM radars. Oklahoma City fired the first successful RIM-8H combat shot in US Navy history in early 1972. It was also the first combat surface-to-surface missile shot in US Navy history.[8]

Long Beach had her Talos launcher removed in 1978. Talos was phased out of fleet service with the decommissioning of USS Oklahoma City in 1979, though the Albany-class ships carrying the system soldiered on a few more years with the launchers left in place until they were retired in 1980. After 21 years of fleet service, the missile was replaced by the RIM-67 Standard missile, which was fired from the smaller Mk10 launcher.

Two Talos missiles are on display at the Military Honor Park located near the entrance of the South Bend International Airport in South Bend, Indiana.

A Talos missile is displayed in the atrium of the South Bend Regional Airport (historically known as Bendix Field).

Another example can be seen at the Patriots Point Naval & Maritime Museum, located at Mount Pleasant, South Carolina.

A Talos Missile can also be seen on display at the Muskogee War Memorial Park located in Muskogee, Oklahoma.

A Talos missile is on display at Naval Weapons Station Yorktown in Yorktown, Virginia.

A Talos missile is on display at The US Navy's Guided Missile School at Dam Neck, in Virginia Beach, Virginia, just outside of the main building of the NAVGMSCOL.

Two Talos missiles are on display, in launch position, on the stern of USS Little Rock at the Buffalo & Erie County Naval & Military Park located in Buffalo, New York.

A Talos missile and booster were on display at Rita Blanca Park (home of the XIT Rodeo & Reunion) in Dalhart Texas, at least from 1981 or earlier, but as of 2017 had been removed. 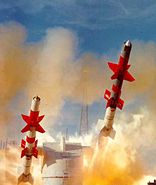 RIM-8A and -8B missile launch.