The RIM-116 Rolling Airframe Missile (RAM) is a small, lightweight, infrared homing surface-to-air missile in use by the German, Japanese, Greek, Turkish, South Korean, Saudi Arabian, Egyptian, Mexican and U.S. Navies. It was intended originally and used primarily as a point-defense weapon against antiship cruise missiles. The missile is so named because it rolls around its longitudinal axis to stabilize its flight path, much like a bullet fired from a rifled barrel. As of 2015[update], it is the only U.S. Navy missile to operate in this manner.[2]

The Rolling Airframe Missiles, together with the Mk 49 Guided Missile Launching System (GMLS) and support equipment, make up the RAM Mk 31 Guided Missile Weapon System (GMWS). The Mk-144 Guided Missile Launcher (GML) unit weighs 5,777 kilograms (12,736 lb) and stores 21 missiles. The original weapon cannot employ its own sensors prior to firing so it must be integrated with a ship's combat system, which directs the launcher at targets. On U.S. ships it is integrated with the AN/SWY-2 Ship Defense Surface Missile System (SDSMS) and Ship Self-Defense System (SSDS) Mk 1 or Mk 2 based combat systems. SeaRAM, a launcher variant equipped with independent sensors derived from the Vulcan Phalanx CIWS, is being installed on Littoral Combat Ships and certain Arleigh Burke-class destroyers.

The RIM-116 was developed by General Dynamics Pomona and Valley Systems divisions under a July 1976 agreement with Denmark and West Germany (the General Dynamics missile business was later acquired by Hughes Aircraft and is today part of Raytheon). Denmark dropped out of the program, but the US Navy joined in as the major partner. The Mk 49 launcher was evaluated on board the destroyer USS David R. Ray in the late 1980s.[2] The first 30 missiles were built in FY85 and they became operational on 14 November 1992, on board USS Peleliu.

The RIM-116 is in service on several American and 30 German warships. All new German Navy warships will be equipped with the RAM, such as the new Braunschweig-class corvettes, which will mount two RAM launchers per ship. The Greek Navy has equipped the new Super Vita–class fast attack craft with the RAM. South Korea has signed license-production contracts for their navy's KDX-II, KDX-III, and Dokdo-class amphibious assault ship.[3]

The original version of the missile, called Block 0, was based on the AIM-9 Sidewinder air-to-air missile, whose rocket motor, fuze, and warhead were used. Block 0 missiles were designed to initially home in on radiation emitted from a target (such as the active radar of an incoming antiship missile), switching to an infrared seeker derived from that of the FIM-92 Stinger missile for terminal guidance. In test firings, the Block 0 missiles achieved hit rates of over 95%.

The Block 1 (RIM-116B) is an improved version of the RAM missile that adds an overall infrared-only guidance system that enables it to intercept missiles that are not emitting any radar signals. The Block 0's radar homing capabilities have been retained.

The RAM Block 2 is an upgraded version of the RAM missile aimed at more effectively countering more maneuverable antiship missiles through a four-axis independent control actuator system, increased rocket motor capability, an improved passive radio frequency seeker and upgraded components of the infrared seeker, and advanced kinematics.[5] On 8 May 2007, the US Navy awarded Raytheon Missile Systems a $105 million development contract; development was expected to be completed by December 2010. LRIP began in 2012.[6] 51 missiles were initially ordered. On 22 October 2012, the RAM Block 2 completed its third guided test vehicle flight, firing two missiles in a salvo and directly hitting the target, to verify the system's command and control capabilities, kinematic performance, guidance system, and airframe capabilities. Raytheon was scheduled to deliver 25 Block 2 missiles during the program's integrated testing phase.[7][8] The Block 2 RAM was delivered to the U.S. Navy in August 2014,[9] with 502 missiles to be acquired from 2015 to 2019.[10] Initial Operational Capability (IOC) for the Block 2 RAM was achieved on 15 May 2015.[11]

In early 2018 the U.S. State Department approved the sale of RIM-116 Block II to the Mexican Navy for use on their future Sigma-class design frigates, the first of which was jointly built by Damen Schelde Naval Shipbuilding and launched in November 2018.[12][13]

In 1998, a memorandum of understanding was signed by the defense departments of Germany and the United States to improve the system, so that it could also engage so-called "HAS", Helicopter, Aircraft, and Surface targets. As developed, the HAS upgrade just required software modifications that can be applied to all Block 1 RAM missiles.

The SeaRAM combines the radar and electrooptical system[2] of the Phalanx CIWS Mk-15 Block 1B (CRDC) with an 11-cell RAM launcher to produce an autonomous system—one which does not need any external information to engage threats. Like the Phalanx, SeaRAM can be fitted to any class of ship. In 2008, the first SeaRAM system was delivered to be installed on USS Independence.[14] As of December 2013[update], one SeaRAM is fitted to each Independence-class vessel.[15] In late 2014, the Navy revealed it had chosen to install the SeaRAM on its Small Surface Combatant LCS follow-on ships.[16] Beginning in November 2015, the Navy will complete installation of a SeaRAM on the first of four Arleigh Burke-class destroyers patrolling within the U.S. 6th Fleet.[17] The SeaRAM will equip the Royal Saudi Navy's multi-mission surface combat (MMSC) based on the Freedom-class littoral combat ships.[18] 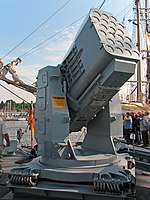