Military Wiki
Register
Don't have an account?
Sign In
Advertisement
in: Pages with script errors, Pages with broken file links, All articles with dead external links,
and 5 more

Royal Air Force Station Croughton or RAF Croughton is a Royal Air Force station which is currently a United States Air Force communications base in Northamptonshire, England, to the southeast of the village of Croughton. The station is home to the 422nd Air Base Group and operates one of Europe's largest military switchboards and processes approximately a third of all U.S. military communications in Europe.

RAF Croughton houses the 422nd Air Base Group whose function is to provide installation support, services, force protection, and worldwide communications across the entire spectrum of operations. The group is located in the UK and supports NATO, US European Command, US Central Command, Air Force Special Operations Command, US Department of State operations and Ministry of Defence operations. The group sustains more than 450 C2 circuits and supports 25 percent of all European Theater to continental United States (CONUS) communications.

It consisted of 694 acres (2.81 km2) consolidated from three farms. Three grass runways with concrete taxiways dominated the high ground with the tower and other infrastructure buildings along the north side of the station and the slope leading up to the runways. In June 1940 the station became a satellite for RAF Upper Heyford for No16 Operational Training Unit (No 16 OTU) to provide the unit with extra airfield space for night-flying training. Much of this training was for Commonwealth pilots (Canadians, South Africans, Australians, and New Zealanders) on Handley Page Hampdens, Bristol Blenheims, and Wellington bombers. The unit fell under the operational control of the newly formed No 7 Group of RAF Bomber Command.

In September 1940 the Air Ministry decided that certain stations would be designated as emergency airfields. These stations would give assistance to any operational aircraft returning damaged or with engine problems. The Station Commander at RAF Upper Heyford received one of these orders. RAF Brackley (Croughton) would remain open with its flare paths illuminated irrespective of enemy activity in the area. This meant that RAF Brackley along with other emergency airfields attracted additional enemy night attacks. Added to this accepted high risk was the fact that RAF Brackley was a training airfield. During the war both sides considered it worthwhile to attack and disrupt training programs. Because training fields and aircraft were lightly defended, they made for easier targets. For these reasons, it was not uncommon for the station or training crews conducting night training to receive the attention of the Luftwaffe.

While the station remained a satellite for RAF Upper Heyford and No 16 OTU until July 1942 and even partially re-equipped with Wellington bombers, its future had already changed. No 23 Squadron of Flying Training Command (FTC) was desperately seeking a suitable airfield to re-house its No 1 Glider Training School (No 1 GTS). Its current home was a small airfield at Thame in Buckinghamshire and FTC felt it inadequate for glider training. Several airfields in the near vicinity made the short list, but RAF Croughton became the new home for the gliders. On 19 July 1942, No 1 GTS began to move in and by 1 August 1942 they were settled into their new home. During this training Hawker Hectors, American Harvards, and Miles Masters pulled Hotspur gliders, while DC-3s pulled the larger Horsa gliders.

With this new mission came a far stricter training regime and standards than that usually found at an RAF training station. The reason for this was the dual roles required of the glider pilots. They would receive 12 weeks of basic flying training, before moving to one of the GTS. Training at the GTS took another 12 weeks. From there they would move onto their operational units. In addition to flying the gliders, pilots had to be as highly trained and disciplined as infantry troops. This way they could make a positive contribution to the battle after landing in the assault areas. However, they would only remain in the assault area until their recovery. By the end of 1942 the RAF thought it had enough trained glider pilots, at least for foreseeable operational need. There was now a large number of trained glider pilots and this led to its own problems and another change in the mission of RAF Croughton.

As the last class passed out of RAF Croughton on 24 March 1943, the glider school closed down. It continued to be a training base, but now it was a satellite for Kidlington in Oxfordshire where the No 20 (Pilot) Advanced Flying Units (AFU) gave refresher or advanced training to pilots. Established in 1942, the AFUs provided refresher courses to pilots trained overseas under the British Commonwealth Air Training Scheme. It also gave newly qualified pilots experience with flying in British weather and handling heavier aircraft. With the No 20 AFU, this meant the Airspeed Oxford. Pilots training with these aircraft knew they were destined for either Bomber or Coastal Command.

On 15 April 1943 No 1538 Beam Approach Training Flight (No 15 BATF) formed at RAF Croughton and added to the station's training mission. Before this many of the pilots training with No 20 AFU received their Beam Approach Training at RAF Feltwell. Both No 1538 BATF and No 20 AFU remained at RAF Croughton until 18 October 1944 when the airfield returned to Flying Training Command. On this date No 1538 BATF disbanded and No 20 AFU retired to Kidlington.

Flying Training Command needed the station to reform No 1 Glider Training School. The decision to re-open glider training came about when the army finally agreed that the glider pilots should be RAF. From the beginning both the RAF and Army had differing opinions as to who should pilot the gliders. The Army felt the Glider Regiment was an elite force and that the pilots should be from the Army or at the very least trained to the same standard. The Army even rejected a proposal from the RAF to have a RAF pilot sit in the second pilot or co-pilot seat. This changed after Operation Market Garden.

During the Arnhem portion of that operation 460 glider pilots were either killed or captured, with another 150 wounded. The Army agreed to let the RAF help fill the vacancies in the Glider Regiment. Of the planned 1,000 trained glider pilot target figure, to be reached by April 1945, the RAF proposed to fill 500. No 1 GTS arrived at RAF Croughton on 1 November 1944. Training continued until after the war and even included the addition of a Glider Instructor Flight. During August 1945 No 1 GTS came under the command of No 21 Hotspur Glider Conversion Unit at RAF Station Brize Norton. Flying and training ceased on 25 May 1946. With No 1 GTS leaving RAF Croughton, its remaining aircraft, Hotspurs and Masters worth preserving, moved to No 3 GTS at RAF Wellesbourne Mountford.

The beginning of 1993 saw several big changes for RAF Croughton. Most of these had to do with mission support. With the projected inactivation of the 20th Fighter Wing at RAF Upper Heyford and closure of that station the 2130 CG redesignated to the 630th Communications Squadron. This new squadron functionally aligned under the 100th Communications Group (CG) at RAF Mildenhall. However, this was no ordinary communications squadron. Before the closure of RAF Upper Heyford, RAF Croughton had relied on the larger base for administrative support to one degree or another. The closure of RAF Upper Heyford forced the squadron to look for ways to be as self-sufficient as possible. To handle most day-to-day support functions, the squadron had its own finance, personnel, supply, and other support elements. It became a mini-station.

During this time RAF Croughton received most of its mission support from the 100 CG as well as some from the 100th Regional Support Group (RSG). Both of these units resided at RAF Mildenhall under the 100th Air Refueling Wing (ARW). This changed on 1 July 1994 when United States Air Forces in Europe (USAFE) conducted another command-wide reorganization. One result of this reorganization was the inactivation of the 100 RSG, its subordinate squadrons and the 100 CG. In their place, USAFE activated the 603d Regional Support Group as an independent group directly under Third Air Force. This in turn forced the redesignation of the 630 CS to the 603d Communications Squadron.

The end of 1995 saw USAFE clarifying the roles and missions of the numbered air forces. This resulted in a change that led to the alignment of three UK and one Norway Geographically Separate Units (GSUs) under the 100 ARW. Third Air Force issued an order, effective 24 May 1996, assigning all personnel formally attached to the 603 RSG and its subordinates to the 100 ARW for administrative control. For RAF Croughton this led to the inactivation of the 603 CS and the activation of the 422d Air Base Squadron (422 ABS) on 1 August 1996.

On 14 January 2004, the 420th Air Base Group (420 ABG) was established at RAF Fairford to improve the oversight and advocacy of GSUs that had been aligned beneath the 100 ARW to include the 422 ABS. The 420 ABG reported directly to 3rd Air Force until 26 May 2004, when the 38th Combat Support Wing (38 CSW) was established to provide oversight/advocacy on behalf of three GSU groups. The 38 CSW and 420 ABG were responsible for the day-to-day operations of the 422 ABS and RAF Croughton.

In November 2013 Tom Watson MP, a former UK defence minister, was reported as saying that there was: "an urgent need for “public scrutiny” of the activities at RAF Croughton. The US Air Force base is a major hub for American military and clandestine communications". It is reported to have been central to the monitoring of the mobile phone of the German Chancellor Angela Merkel.[1]

On 12 May 2005, the 422 ABG became a unit of the 501st Combat Support Wing (501 CSW) when the 501 CSW replaced the 38 CSW. This change was made to functionally align all major Geographically Separate Units (GSUs) in England. This created the 422 ABG in charge of the 422d Air Base Squadron, the 422d Communications Squadron, the 422d Civil Engineering Squadron and the 422d Security Forces Squadron. 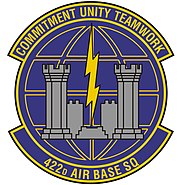 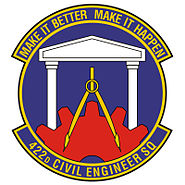