View source
Not to be confused with the QF 2-pounder naval gun also known as the pom-pom.

The QF 1 pounder, universally known as the pom-pom due to the sound of its discharge,[4][5][6] was a 37 mm British autocannon, the first of its type in the world. It was used by several countries initially as an infantry gun and later as a light anti-aircraft gun.

Hiram Maxim originally designed the Pom-Pom in the late 1880s as an enlarged version of the Maxim machine gun. Its longer range necessitated exploding projectiles to judge range, which in turn dictated a shell weight of at least 400 grams (0.88 lb), as that was the lightest exploding shell allowed under the St. Petersburg Declaration of 1868 and reaffirmed in the Hague Convention of 1899.[7]

Early versions were sold under the Maxim-Nordenfelt label, whereas versions in British service (i.e. from 1900) were labelled Vickers, Sons and Maxim (VSM) as Vickers had bought out Maxim-Nordenfelt in 1897. They are all effectively the same gun.

The British government initially rejected the gun but other countries bought it, including the South African Republic (Transvaal) government. In the Second Boer War, the British found themselves being fired on with success by the Boers with their 37 mm Maxim-Nordenfelt versions with ammunition made in Germany.

In response, Vickers-Maxim of Britain shipped either 57 or 50[8] guns out to the British Army in South Africa, with the first three arriving in time for the Battle of Paardeberg of February 1900.[9] These early Mk I versions were mounted on typical field gun type carriages.

In World War I, it was used as an early anti-aircraft gun in the home defence of Britain. It was adapted as the Mk I*** and Mk II on high-angle pedestal mountings and deployed along London docks and on rooftops on key buildings in London, others on mobile motor lorries at key towns in the East and Southeast of England. 25 were employed in August 1914, and 50 in February 1916.[10] The Mk II gun at the top of this page on Naval pedestal mounting was the first to open fire in defence of London during the war.[3] However, the small shell was insufficient to damage the German Zeppelin airships sufficiently to bring them down.[11] The Ministry of Munitions noted in 1922: "The pom-poms were of very little value. There was no shrapnel available for them, and the shell provided for them would not burst on aeroplane fabric but fell back to earth as solid projectiles... were of no use except at a much lower elevation than a Zeppelin attacking London was likely to keep".[12]

Nevertheless, Lieutenant O.F.J. Hogg of No. 2 AA Section in III Corps was the first anti-aircraft gunner to shoot down an aircraft, with 75 rounds on 23 September 1914 in France.[13]

The British Army did not employ it as an infantry weapon in World War I, as its shell was considered too small for use against any objects or fortifications and British doctrine relied on shrapnel fired by QF 13 pounder and 18-pounder field guns as its primary medium range anti-personnel weapon.

The gun was experimentally mounted on aircraft as the lighter 1-pounder Mk III, the cancelled Vickers E.F.B.7 being specifically designed to carry it in its nose.[14] As a light anti-aircraft gun, it was quickly replaced by the larger QF 1½ pounder and QF 2 pounder naval guns.

The British are reported to have initially used some Common pointed shells (semi-armour piercing, with fuze in the shell base) in the Boer War, in addition to the standard Common shell. However, the common pointed shell proved unsatisfactory, with the base fuze frequently working loose and falling out during flight.[9][15] In 1914, the cast-iron common shell and tracer were the only available rounds.[16] 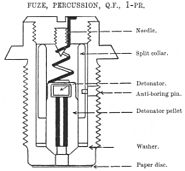 A version was produced in Germany for both Navy and Army.[3]

In World War I, it was used in Europe as an anti-aircraft gun as the Maxim Flak M14. Four guns were used mounted on field carriages in the German campaign in South West Africa in 1915, against South African forces.[17]

The Belgian Army used the gun on a high-angle field carriage mounting.[3]