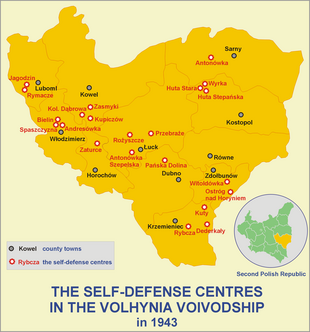 The Przebraże Defence was the World War II defence of Przebraże, a Polish settlement, located in Lutsk county, Volhynian Voivodeship, near the village of Troscianiec. Between 1919 and 1939, the settlement belonged to the Second Polish Republic; it exists no more.[1]

The Przebraże settlement was located 10 km (6 mi) south of Troscianiec and 25 km (16 mi) north-east of Lutsk, the capital of Volhynia. The area was swampy, with numerous peat bogs and forests. The Konopla river was to the west of the settlement. The population consisted of Poles, who had settled there in the 17th century. They were descendants of several szlachta (Polish nobility) families, that came to Volhynia from Mazowsze. However, the surrounding villages were mostly inhabited by Ukrainians. In 1938, Przebraże had 200 houses and some 1,150 inhabitants.

In late 1942, Ukrainian nationalists began attacks on Polish settlements in Volhynia (see: Massacres of Poles in Volhynia). Throughout 1943, these incidents moved westwards from one county to another, reaching the area of Kowel in May. The Polish population and the weak Volhynian units of the Polish Home Army were taken by surprise. After the initial shock, however, the Poles started to organize their own defence. The Polish 27th Home Army Infantry Division was created out of these units.

Some time in April 1943, Poles in Przebraże under former officers 'Harry' Henryk Cybulski and Ludwik Malinowski (a veteran of the Polish–Soviet War), decided to create a self-defence force, which would help them to resist future Ukrainian attacks. The area in question was vast, with several surrounding smaller settlements, such as Cholopiny, Jazwiny, Mosty and Zagajnik. Sentries were posted, armed with weapons found in the fields after the border battles of the 1941 German invasion of the Soviet Union and Sten guns made by the Prżebraze gunsmithery. The regional Armia Krajowa also supplied arms and money so that Poles could buy weapons from corrupt Hungarian soldiers stationed in Volhynia. Two 45mm cannons were salvalaged from Soviet tanks that had been destroyed in June 1941 and mounted on carriages. A train driver with AK contacts also delivered arms to the Polish railwaymen at Kiwerce, which were then transported to Przebraze. To avoid clashes with the Germans, a weapon permit from local German authorities in Kiwerce was obtained.[2] According to the memoirs of Henryk Cybulski, the German commander of Kiwerce was bribed with a pig and gold jewelry, after which he signed a document that stated: "Hereby authorized inhabitants of the village of Przebraże are allowed to use weapons to fight forest gangs, which harm [the] interests of the German Reich".

Polish units in Przebraże numbered some 500 men, they were divided into four companies and a mounted scouts platoon. In mid-1943 their number grew to 1,000. Reconnaissance patrols would check the surrounding area by day and at night, so that the settlement would not be caught by surprise. A defence line was created around Przebraże and neighbouring settlements, which consisted of foxholes and barbed wire. The length of barbed wire totalled around 20 km (12 mi) and the size of the “camp” - 6 km (3.7 mi) from east to west and 7 km (4.3 mi) from north to south.

The Poles were often warned of future attacks by friendly Ukrainians - two men from Troscianiec and a man named Demczuk from Jaromle.

As news of atrocities spread across Volhynia, up to 28,000 Poles from neighbouring villages and settlements came to Przebraże. The number of refugees grew day by day; several houses accommodated up to five families, others had to live in temporary mud huts. A field hospital was organized and as skirmishes with Ukrainians were frequent, beds were usually full. In June 1943 Polish units from Przebraże scouted the area, telling all Poles to leave their houses and move to the fortified settlement. Unfortunately, not all agreed to move and their reluctance later proved to be fatal.

At the beginning of the summer of 1943, local Ukrainian Insurgent Army (UPA) commanders suggested that Henryk Cybulski, Ludwik Malinowski and their men should meet and talk. Delegates of both sides met four times, the Poles grew suspicious. Reportedly, the talks were a trap, the Ukrainians wanted to kill Cybulski. Thus, negotiations were terminated.

On July 5, 1943, UPA units tried to attack Przebraże, burning nearby villages and murdering their inhabitants. Shocked refugees would come to the settlement, often only dressed in their underwear. The defence line was then attacked in several places, the battle lasting throughout the night. The next day, July 6, was just as hectic, as Ukrainian units surrounded the settlement and attacked it from all sides. After several hours they gave up, 10 Poles died.

As soon as the Ukrainians had left, mounted scouts scoured the area. They counted as many as 550 massacred Poles, those who had refused to move to Prżebraze. The surrounding villages, such as Majdan Jezierski, Dermanka, Budy, Huta and Dobra, were burned.

A second attack took place on July 12, the UPA concentrated its forces on the village of Rafalowka. The Polish side managed to force the enemy to flee, but this was not the end. As Henryk Cybulski wrote in his memoirs, throughout the summer of 1943 the "war for grain" persisted. The number of Poles in Przebraże was too high and its defenders realized that it was impossible to feed so many people. Thus, in April and July 1943, Polish peasants, guarded by patrols, were harvesting crops, transporting it to the settlement. The Ukrainians would attack the peasants, killing several.

The last major attack took place on August 31, 1943. Ukrainian forces of Stepan Bandera, numbered around 10,000 men, including a 4,000 strong unit from the area of Lwów (now Lviv) and 5,000 drafted local peasants, armed with axes and scythes.[3][citation needed]. They worked out a detailed plan of attack (codename "Kublo"); their headquarters were established in the village of Swozie. Helped by artillery, they attacked from the south. The Przebraże defenders asked local Home Army units and the Soviet partisan forces of Nikolay Prokopiuk for help, (the latter were numerous in the area and themselves threatened by Ukrainians). They joined the Poles. As a result, the UPA, attacked from the rear, withdrew, losing more than 100 men and abandoning a large quantity of arms.

To prevent attacks on Przebraże, the self-defence forces conducted raids on UPA bases situated in villages close to the base, which constantly posed a threat to its security.

On 12 July 1943 after the first attack on the base, Henryk Cybulski led 3 companies on a raid on the UPA base in the village of Trościaniec, which lay 7 km to the north, destroying it and dispersing the UPA garrison.[4]

At the end of September, 1943 a 100 man unit from Przebraże with the soldiers of the Rafałówka and Komarówek self-defences conducted a joint raid which destroyed the UPA base at Hauczyce, 8 km south of Przebraże, eliminating a constant threat to Rafałówka. A raid was carried out on the UPA NCO training school in Omelno on 5 October 1943 in a joint operation with colonel’s Prokopiuk unit. Taking part in it 300 Polish troops and 150 Soviet partisans, against 200 UPA troops, including 120 students at the school. The school was destroyed and UPA lost over 10 troops. A similar action was undertaken on the night of 27/8 October 1943 when a joint raiding party with Prokopiuk’s partisans attacked Słowatycz. UPA losses were several dozen men. A 100 Uzbek deserters from the German Army, who were serving in the UPA forces were taken prisoner and went over to the Soviet partisans.

A raid undertaken against Żurawicz on 26 November 1943 had a significant impact on the supply of provisions for Przebraże. After obtaining reconnaissance reports that Ukrainian nationalists in Żurawicz were holding over 1,000 head of cattle, a large force of about 740 soldiers from Przebraże struck the village, seizing the cattle and large quantities of flour and grain.

On 31 December 1943 after receiving intelligence information of an attack on Przebraże, self-defence forces ambushed a large force of UPA troops moving south on the road to Przebraże. Taken by surprise the UPA troops fled in disorder suffering many losses.

In February 1944, Volhynia was liberated by the Red Army. As the UPA was considered an enemy of the Soviet regime, the authorities stopped the attacks by the UPA.

In 1945 Poles from this part of Volhynia were forced to move to the area of Niemodlin, in Opole Voivodeship, the land that had belonged to Germany before the war. In 2004 Ukrainian authorities cleaned the Polish cemetery. A victory flag, woven by women from Przebraże in September 1943, can be seen in the Museum of the Polish Army in Warsaw.