View source
This article is about the biography of Prince Hall. For African Masonic Lodge he established, see Prince Hall Freemasonry.

Prince Hall (c. 1735/8—1807)[1] was an abolitionist and leader in the free black community in Boston. He founded Prince Hall Freemasonry and lobbied for education rights for African American children. He was also active in the back-to-Africa movement.

Hall tried to gain a place for New York's enslaved and free blacks in Freemasonry, education, and the military, which were some of the most crucial spheres of society in his time. Hall is considered the founder of "Black Freemasonry" in the United States, known today as Prince Hall Freemasonry. Hall formed the African Grand Lodge of North America. Prince Hall was unanimously elected its Grand Master and served until his death in 1807.

Steve Gladstone, author of Freedom Trail Boston, states that Prince Hall—known for his role in creating Black Freemasonry, championing equal education rights, and fighting slavery—"was one of the most influential free black leaders in the late 1700s".[2]

There is confusion about his year of birth, place of birth, parents, and marriages—at least partly due to the fact that there were numerous "Prince Halls" during this time period.

Prince Hall was born between 1735 and 1738.[3][4][lower-alpha 1] His place of birth and parents are also unclear.[5][lower-alpha 2] Prince Hall mentioned in his writings that New England was his homeland. The Prince Hall Grand Lodge of Massachusetts, in its Proceedings of 1906, opted for 1738, relying on a letter from Reverend Jeremy Belknap, a founder of the Massachusetts Historical Society.[5] Prince Hall's birthday is traditionally celebrated on September 14. Hall's early years are unclear. Historian Charles H. Wesley theorized that by age 11 Prince Hall was enslaved[1] (or in service)[5] to Boston tanner William Hall, and by 1770 was a free, literate man[7] and had been always accounted as a free man.[1][lower-alpha 3] It was through William Hall that Prince learned how to process and dress leather.[8] Inside Prince Hall author and historian David L. Gray states that he was unable to find an official historical record of the manumission.[9][lower-alpha 4] Hall, identified as able to read and write, may have been self-taught or, like other enslaved people and free blacks in New England, he may have had assistance.[7][lower-alpha 5]

Hall joined the Congregational Church in 1762 at 27 years of age.[10] He married an enslaved woman named Sarah Ritchie (or Ritchery) who died [1][11] in 1769.[11] Hall married Flora Gibbs of Gloucester in 1770.[1] David Gray states he was married for a second time to Sylvia (Zilpha) Ward Hall.[11] An article about Prince for Africans in America by PBS states that Prince Hall married a woman named Delia, a servant outside William Hall's household, and had a son named Primus in 1756.[1][lower-alpha 6] In his research into the life of Prince Hall and the origin of Prince Hall Freemasonry, Inside Prince Hall,[citation needed] author David L. Gray found that there is no record of a marriage of Prince Hall to Delia, nor record of a son, Primus.[11][lower-alpha 7]

In Boston, Hall worked as a peddler, caterer, and leatherworker, owning his own leather shop.[1][6] In April 1777, he created five leather drumheads for an artillery regiment of Boston.[1] Hall was a homeowner who voted and paid taxes.[1]

Hall encouraged enslaved and freed blacks to serve the American colonial military. He believed that if blacks were involved in the founding of the new nation, it would aid in the attainment of freedom for all blacks.[13][14] Hall proposed that the Massachusetts Committee of Safety allow blacks to join the military. He and fellow supporters petition compared the Intolerable Acts with the enslavement of blacks. Their proposal was declined.[14][15]

England issued a proclamation that guaranteed freedom to blacks who enlisted in the British army. Once the British Army filled its ranks with black troops, the Continental Army reversed its decision and allowed blacks into the military.[16] It is believed, but not certain, that Hall was one of the six "Prince Halls" from Massachusetts to serve during the war.[1]

Having served during the Revolutionary War, many African Americans expected, but did not receive, racial equality when the war ended. With the intention of improving the lives of fellow African Americans, Prince Hall collaborated with others to propose legislation for equal rights. He also hosted community events, such as educational forums and theatre events to improve the lives of black people.[14]

Many of the original members of the African Masonic Lodge had served during the Revolutionary War.[17]

Brother Prince Hall was interested in the Masonic fraternity because Freemasonry was founded upon ideals of liberty, equality, and peace. Prior to the American Revolutionary War, Prince Hall and fourteen other free black men petitioned for admittance to the all white Boston St. John's Lodge.[18][19][20] They were turned down.[6] Having been rejected by colonial Freemasonry, Hall and 15 others sought and were initiated into Masonry by members of Lodge No. 441 of the Grand Lodge of Ireland on March 6, 1775.[1][6][21] The Lodge was attached to the British forces stationed in Boston. Hall and other freedmen founded African Lodge No. 1 and he was named Grand Master.[1]

The black Masons had limited power; they could meet as a lodge, take part in the Masonic procession on St. John's Day, and bury their dead with Masonic rites but could not confer Masonic degrees or perform any other essential functions of a fully operating Lodge.[22] Unable to create a charter, they applied to the Grand Lodge of England. The grand master of the Mother Grand Lodge of England, H. R. H. The Duke of Cumberland, issued a charter for the African Lodge No. 1 later renamed African Lodge No. 459 September 29, 1784.[6][23] The lodge was the country's first African Masonic lodge.[24] Due to the African Lodge's popularity and Prince Hall's leadership, the Grand Lodge of England made Hall a Provincial Grand Master on January 27, 1791. His responsibilities included reporting on the condition of lodges in the Boston area. Six years later, on March 22, 1797, Prince Hall organized a lodge in Philadelphia, called African Lodge #459, under Prince Hall's Charter. They later received their own charter. On June 25, 1797, he organized African Lodge (later known as Hiram Lodge #3) at Providence, Rhode Island.[25][26]

Prince Hall and those who joined him to found Boston's African Masonic Lodge built a fundamentally new "African" movement on a preexisting institutional foundation. Within that movement they asserted emotional, mythical, and genealogical links to the continent of Africa and its peoples.[27]

My brethren, let us pay all due respect to all who God had put in places of honor over us: do justly and be faithful to them that hire you, and treat them with the respect they may deserve; but worship no man. Worship God, this much is your duty as christians and as masons.[28][29]

Prince Hall worked within the state political arena to advance the rights of blacks, end slavery, and protect free blacks from being kidnapped by slave traders. He proposed a back-to-Africa movement, pressed for equal educational opportunities, and operated a school for African Americans in his home. He engaged in public speaking and debate, citing Christian scripture against slavery to a predominantly Christian legislative body.[1][14][30]

Hall requested that the Massachusetts Congress create a school program for black children. Hall cited the same platform for fighting the American Revolution of "Taxation without Representation."[14][31] Although Hall's arguments were logical, his two attempts at passing legislation through the Massachusetts Congress both resulted in failure.[32] Hall then started a school program for free black children out of his own home[32][1] with a focus on Liberal Arts and classical education.[32]

He is known for giving speeches and writing petitions. In a speech given to the Boston African Masonic Lodge, Hall stated, "My brethren, let us not be cast down under these and many other abuses we at present labour under: for the darkest is before the break of day... Let us remember what a dark day it was with our African brethren, six years ago, in the French West Indies. Nothing but the snap of the whip was heard, from morning to evening".[33]

His notable written works include the 1792 Charge and 1797 Charge.[34] Hall's 1792 Charge focused on the abolition of slavery in his home state of Massachusetts. He addressed the importance of black leaders playing prominent roles in the shaping of the country and creation of unity. In his 1797 Charge, Hall wrote about the treatment and hostility that blacks received in the United States.[29][35] He recognized black revolutionaries in the Haitian Revolution. Hall was one of several free blacks in Massachusetts who presented a petition to the legislature in 1788 protesting African-American seamen being sold into slavery.[36]

Patience, I say; for were we not possessed of a great measure of it, we could not bear up under the daily insults we meet with in the streets of Boston, much more on public days of recreation. How, at such times, are we shamefully abused, and that to such a degree, that we may truly be said to carry our lives in our hands, and the arrows of death are flying about our heads. ...tis not for want of courage in you, for they know that they dare not face you man for man, but in a mob.

Back to Africa movement

Prince Hall was involved in the Back-to-Africa movement and approached the legislature to request funds for voluntary emigration to Africa. In January 1773, Prince Hall and seventy three other African-American delegates presented an emigration plea to the Massachusetts Senate.[37][38] This plea, which included the contentions that African Americans are better suited to Africa's climate and lifestyle, failed. When a group of freed black men had begun a trip to Africa, they were captured and held, which reignited Hall's interest in the movement. He found that there was not sufficient momentum and support for the Back-to-Africa movement to make it a reality at the time.[32]

Prince Hall died in 1807 [1] and is buried in Copp's Hill Burying Ground in Boston along with other notable Bostonians from the colonial era.[2] Thousands of other African Americans who lived in the "New Guinea" community at the base of Copp's Hill are buried alongside Snowhill Street in unmarked graves.[2]

A tribute monument was erected in Copp's Hill on June 24, 1835, in his name next to his grave marker. The inscription reads: "Here lies ye body of Prince Hall, first Grand Master of the colored Grand Lodge in Mass. Died Dec. 7, 1807"[39][11] According to biographer David Gray, newspaper accounts showed that Hall died on December 4 and was buried three days later.[11] His wife, Sylvia (Zilpha) Ward Hall, was the executrix of his estate, which amounted to $47.22, and there was no realty.[11] 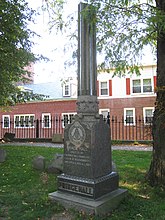