Military Wiki
Register
Don't have an account?
Sign In
Advertisement
in: Articles incorporating text from Wikipedia, Presidential Medal of Freedom recipients, Presidency of the United States,
and 2 more

The Presidential Medal of Freedom is an award bestowed by the President of the United States and is—along with the comparable Congressional Gold Medal bestowed by an act of U.S. Congress—the highest civilian award of the United States. It recognizes those individuals who have made "an especially meritorious contribution to the security or national interests of the United States, world peace, cultural or other significant public or private endeavors".[3] The award is not limited to U.S. s and, while it is a civilian award, it can also be awarded to military personnel and worn on the uniform.

History of the award

The medal may be awarded to an individual more than once (John Kenneth Galbraith and Colin Powell each have received two awards; Ellsworth Bunker received both of his awards With Distinction), and may also be awarded posthumously (for example, Cesar Chavez, Paul "Bear" Bryant, Roberto Clemente, Jack Kemp, John F. Kennedy, Thurgood Marshall, Lyndon Johnson and Neil Armstrong).

s including undress ribbon, miniature, and lapel badge.]][[File:PMOFwD1.jpg|thumb|right|160px|Graphical representation of the Presidential Medal of Freedom with Distinction.

The badge of the Presidential Medal of Freedom is in the form of a golden star with white enamel, with a red enamel pentagon behind it; the central disc bears thirteen gold stars on a blue enamel background (taken from the Great Seal of the United States) within a golden ring. Golden American Bald Eagles with spread wings stand between the points of the star. It is worn around the neck on a blue ribbon with white edge stripes.

A special grade of the medal, known as the Presidential Medal of Freedom with Distinction,[6] has a larger execution of the same medal design worn as a star on the left chest along with a sash over the right shoulder, with its rosette (blue with white edge, bearing the central disc of the medal at its center) resting on the left hip. When the medal With Distinction is awarded, the star may be presented depending from a neck ribbon and can be identified by its larger size than the standard medal (compare size of medals in pictures below; President Reagan's was awarded With Distinction).

Both medals may also be worn in miniature form on a ribbon on the left chest, with a silver American Bald Eagle with spread wings on the ribbon (or a golden American Bald Eagle for a medal awarded "With Distinction"). In addition, the medal is accompanied by a service ribbon for wear on military service uniform, a miniature medal pendant for wear on mess dress or civilian formal wear, and a lapel badge for wear on civilian clothes (all shown in the accompanying photograph of the full presentation set).

Former Prime Minister of Australia John Howard receiving the Medal from George W. Bush in May 2006

Gordon B. Hinckley receiving the Presidential Medal of Freedom from George W. Bush in 2004 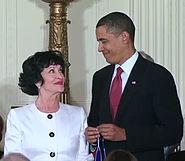 Chita Rivera with President Barack Obama prior to receiving the Presidential Medal of Freedom, August 2009

President Barack Obama talks with Stephen Hawking in the Blue Room of the White House before a ceremony presenting him and 15 others the Presidential Medal of Freedom, August 12, 2009.