President of the People's Republic of China

The president of the People's Republic of China is the head of state of the People's Republic of China. Under the country's constitution, the presidency is a largely ceremonial office with limited power. However, since 1993, as a matter of convention, the presidency has been held simultaneously by the general secretary of the Communist Party of China, the top leader in the one party system. The presidency is officially regarded as an institution of the state rather than an administrative post; theoretically, the president serves at the pleasure of the National People's Congress, the legislature, and is not legally vested to take executive action on his own prerogative.[note 1] The current president is Xi Jinping, who took office in March 2013.

Since 1993, apart from brief periods of transition, the top leader of China simultaneously serves as the president, the leader of the party (as General Secretary), and the commander-in-chief of the military (as the chairman of the Central Military Commission). This individual then carries out different duties under separate titles. For example, the leader meets foreign dignitaries and receives ambassadors in his capacity as president, issues military directives as Chairman of the Central Military Commission, and upholds party rule as the general secretary of the Communist Party of China.

Between 1982 and 2018, the constitution stipulated that the president could not serve more than two consecutive terms. During the Mao era and also since 2018, there were no term limits attached to this office. In 2018, the term limits of the presidency was abolished, but its powers and ceremonial role were unchanged.

According to the current Constitution of the People's Republic of China, the president must be a Chinese citizen with full electoral rights who has reached the age of 45.

The president is elected by the National People's Congress (NPC), China's highest state body, which also has the power to remove the president and other state officers from office. Elections and removals are decided by a simple majority vote.[2]

Between 1982 and March 2018, the president and vice-president were limited to two consecutive terms.[5] However these limits were removed at the 2018 National People's Congress.[6][7]

Under the current constitution, instated in 1982 with minor revisions in later years, the president has the power to promulgate laws, select and dismiss the premier (prime minister) as well as the ministers of the State Council, grant presidential pardons, declares a state of emergency, issue mass mobilization orders, and issue state honours. In addition, the president names and dismisses ambassadors to foreign countries, signs and annuls treaties with foreign entities. According to the Constitution, all of these powers require the approval or confirmation of the National People's Congress. The president also conducts state visits on behalf of the People's Republic. Under the constitution the "state visit" clause is the only presidential power that does not stipulate any form of oversight from the National People's Congress. As the vast majority of presidential powers are dependent on the ratification of the NPC, the president is, in essence, a symbolic post without any direct say in the governance of state. It is therefore conceived to mainly function as an symbolic institution of the state rather than an office with true executive powers.[5][8][9]

In 2019, a report of U.S.-China Economic and Security Review Commission said that everyone should stop calling Chinese leader Xi Jinping “President” instead of “General Secretary” under Xi's one-party leadership.[12]

The president also has multiple modes of transports which he/she controls and can alter at any time. By plane

The history of transporting heads of state dates back to the time of CAAC Airlines.

Lower officials would be transported in a CAAC Boeing 707. Chairman Mao Zedong had a personal Ilyushin Il-18 which he used on his visits. After he died, the aircraft was withdrawn from service and preserved at an aviation museum in China. In the 1970s, the position of Chinese president was abolished, but Mao Zedong and Hua Guofeng were Chairman of the Communist Party of China successively. With the introduction of the Boeing 747, officials started using the CAAC Boeing 747SP for international trips. After the CAAC was split up into six in 1988, the 747s were handed over to Air China, and officials continued using 747SPs under the CA livery. When Jiang Zemin came into power and succeeded as Party General Secretary in 1989, the 747SPs were permanently returned to passenger service, and 747-400s were utilized. They were used throughout the use of Jiang, Hu Jintao and Xi Jinping. The 747-400s originally belong to Air China, but one month before the president goes on an official trip, the chosen plane is specifically inspected and retrofitted for VIP use. After the president returns to Beijing, the 747-400 is inspected and converted back to passenger configurations. In the 2010s a Boeing 747-8 painted in the CA livery was seen around the world, under the fake rego B-2479 and the real rego B-2485. Rumours spread, saying this would be China's new Air Force One. In 2016 it was seen landing in Hamburg for VIP configuration, and since then, it has been on loan to the Chinese Government from Air China for use by the president. Although no official photos have been released, the inside is thought to have a far more lavish interior, including conference tables, seating for the press, private bedrooms, and other features. After the 747-8 was introduced, the 747-400s now carry ministers and serve as decoy aircraft. On some occasions, an Air China Boeing 737 has even been used for transport. In the late 2010s, the president started importing his own presidential car on foreign trips. For this reason, an Air China Boeing 747 cargo aircraft is used for transportation of freight. In order not to confuse air traffic control between a normal CA flight and a flight carrying a Chinese government member, all aircraft carrying government people fly under the callsign CA1 to CA100, since normal CA flights fly under the callsign CA101 and above.

Main article: Orders of precedence in the People's Republic of China

The office of State Chairman (the original English translation, as noted above) was first established under the 1954 Constitution. The ceremonial powers of the office were largely identical to those in the current Constitution.[17]

The powers of the 1954 office differed from those of the current office in two areas: military and governmental. The state chairman's military powers were defined in the 1954 Constitution as follows: "The Chairman of the People's Republic of China commands the armed forces of the state, and is Chairman of the National Defence Council (Chinese: 国防委员会)."[18] The National Defence Council was unique to the 1954 Constitution, and was mandated as the civil command for the People's Liberation Army. It was abolished under the 1975 Constitution.

Mao Zedong was the first to hold the office of State Chairman. He was elected at the founding session of the National People's Congress in 1955. At the 2nd NPC in 1959, Mao was succeeded by Liu Shaoqi, first vice chairman of the Communist Party. Liu was reelected as State Chairman at the 3rd NPC in Jan 1965. However, in 1966, Mao launched the Cultural Revolution and by August 1966 Mao and his supporters succeeding in removing Liu from his position as party vice chairman. A few months later Liu was apparently placed under house arrest, and after a prolonged power struggle the 12th Plenum of the 8th Communist Party Congress stripped Liu Shaoqi of all his party and non-party positions on 31 October 1968, including the post of State Chairman. This was in violation of the Constitution, which required a vote by the NPC to remove the state chairman.[citation needed]

After Liu's removal in 1968, the office of State Chairman was vacant. From 1972 to 1975, however, state media referred to Vice State Chairman Dong Biwu as "acting state chairman."[citation needed]

When the 4th NPC was convened in 1975, its main act was to adopt a new Constitution which eliminated the office of State Chairman and emphasized instead the leadership of the Communist Party over the state, including an article that made the party chairman Supreme Commander of the PLA in concurrence as Chairman of the party CMC.[20] The 5th NPC was convened two years early, in 1978, and a third Constitution was adopted, which also lacked the office of State Chairman. The office was finally reinstated in the fourth Constitution, adopted by the 5th Session of the 5th NPC in 1982. The title of the office (国家主席, guojia zhuxi) was unchanged in the Chinese text, but a new English translation of "President of the People's Republic of China" was adopted.

In the 1982 Constitution, the president was conceived of as a figurehead of state with actual state power resting in the hands of the general secretary of the Communist Party, premier of the State Council and the chairman of the Central Military Commission, and all four posts were designed to be held by separate people. The president therefore held minor responsibilities such as greeting foreign dignitaries and signing the appointment of embassy staff, and did not intervene in the affairs of the State Council or the party. In the original 1982 Constitution plan, the party would develop policy, the state would execute it, and the power would be divided to prevent a cult of personality from forming as it did with the case of Mao Zedong. Thus in 1982, China perceivably had four main leaders: Hu Yaobang, the party general secretary; Zhao Ziyang, the premier; Li Xiannian, the president; and Deng Xiaoping, the "paramount leader", holding title of the chairman of the Central Military Commission and was overall commander-in-chief of the armed forces. The current political structure of Vietnam is similar to the structure China followed in the 1980s. 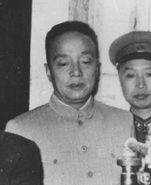 Other heads of state

Main article: Spouse of the President of the People's Republic of China

Since the first president, seven had a spouse during term of office.