The military cemetery holds the graves of many who have fought and died for their country since the early 19th century, including a large number involved in the 1920 Battle of Warsaw, the September 1939 Campaign, and the ill-fated 1944 Warsaw Uprising against Nazi Germany.

It was founded in 1912 as an annex to the Catholic cemetery, but after Poland regained independence in 1918, it became the state cemetery, where some of the most notable people of the period were buried, regardless of their faith.

A large part of the cemetery is occupied by graves of Polish soldiers who fell in the Warsaw Uprising. Most of the graves were exhumed between 1945 and 1953 from the streets of Warsaw. In many cases, the names of the soldiers remain unknown, and the graves are marked only by the Polish Red Cross identification number. Until the early 1950s, brothers-in-arms of many fallen soldiers organised exhumations of their colleagues on their own, and there are many quarters where soldiers of specific units are buried. Also in the cemetery are several mass graves of (mostly unknown) civilian victims of the German terror during World War II and of the Warsaw Uprising.

In 1964 communist authorities renamed the cemetery to "Communal Cemetery". The traditional name was restored in 1998.

Graves from the Polish-Soviet War

Graves of the victims of the LOT Polish Airlines Flight 5055

Funeral ceremony at the cemetery 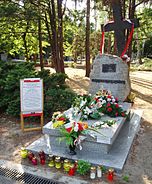