The Wojska Lądowe (English: Land Forces) are a military branch of the Armed Forces of the Republic of Poland. They currently contain some 106,000 active personnel and form many components of European Union and NATO deployments around the world. Poland's recorded military history stretches back for hundreds of years – since the 10th century (see List of Polish wars and History of the Polish Army), but Poland's modern army was formed after 1918.

The Polish land forces as readied for the Polish-Soviet War was made up of soldiers who had formerly served in the various partitioning empires, supported by some international volunteers.[3] There appear to have been a total of around 30 Polish divisions involved. Boris Savinkov was at the head of an army of 20,000 to 30,000 largely Russian POWs, and was accompanied by Dmitry Merezhkovsky and Zinaida Gippius. The Polish forces grew from approximately 100,000 in 1918 to over 500,000 in early 1920.[4] In August 1920, the Polish army had reached a total strength of 737,767 people; half of that was on the frontline. Given Soviet losses, there was rough numerical parity between the two armies; and by the time of the battle of Warsaw Poles might have even had a slight advantage in numbers and logistics.[5]

Among the major formations involved on the Polish side were a number of Fronts, including the pl:Front Litewsko-Białoruski, and about seven armies, including the First Polish Army.

The German invasion of Poland began on September 1, 1939, and the Wehrmacht seized half the country quickly despite heavy Polish resistance. Among the erroneous myths generated by this campaign were accounts of Polish cavalry charging German tanks, which did not, in fact, take place. In the east, the Red Army took the other half of the country in accordance with the Nazi-Soviet Pact. Following the country's fall, Polish soldiers began regrouping in what was to become the Polish Army in France. Both the Polish Armed Forces in the West and the Polish Armed Forces in the East, as well as interior (partisan) forces, primarily represented by the Home Army (AK) had land forces during the Second World War. While the forces fighting under the Allied banner where supported by the Polish air force and navy, the partisan forces were an exclusive land formation.

However the army operational today has its roots in the surrogate force formed in support of Soviet interests during the establishment of the People's Republic of Poland after the Second World War. Two Polish armies, the First Army (Poland) and the Second Army fought with the Red Army on the Eastern Front, supported by some Polish air force elements. The formation of a Third Army was begun but not completed.

The end of the war found the Polish Army in the midst of intense organisational development. Although the implementation of the Polish Front concept was abandoned, new tactical unit and troop types were created. As a result of mobilisation, troop numbers in May 1945 reached 370,000 soldiers, while in September 1945 440,000. Military districts were organised in liberated areas. The districts exercised direct authority over the units stationed on the territory administered by them. Returning to the country, the Second Army was tasked with the protection of the western border of the state from Jelenia Gora to Kamien Pomorski, and on the basis of its headquarters, the staff of the Poznan Military District was created at Poznań. The southern border, from Jelenia Gora to the Użok railway station (at the junction of the Polish, the Soviet and the Czechoslovak borders) was occupied by the First Army. Its headquarters staff formed the basis of the Silesian Military District.

In June 1945 the 1st, 3rd and 8th Infantry Divisions were assigned internal security duties, while the 4th Infantry Division was reorganised for the purpose of creating the Internal Security Corps (KBW). The rule was that military units were used primarily against the Ukrainian Insurgent Army (UPA), while the Internal Security Corps was used to fight the armed underground independence. Often however army units fought the underground resistance, and vice versa. The culmination of the UPA suppression operation was the so-called 'Wisła Action' (Operation Vistula) which took place in 1947. At the same time demobilisation took place, moving the armed forces to a peace-time footing. On August 10, 1945 a "decree of the partial demobilisation" of the armed forces was issued. The next demobilisation phase took place in February and December 1946.

One of the most important tasks facing the army after the war was national mine clearance. Between 1944 and 1956 the demining operation involved 44 engineering units or about 19,000 sappers. They cleared mines and other munitions in a clearance area of more than 250,000 square kilometers (80% of the country). 14.75 million munitions of various types and 59 million bullets, bombs and other ammunition were found and removed. The mining operations cost the lives of 646 sappers. 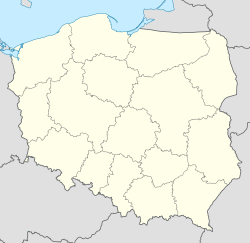 Following victory and the movement of Polish borders these troops and other Polish soldiers thought loyal to their Soviet overlords were built up into a force which was to form part of the Warsaw Pact. Polish Army troops would have formed part of the second strategic echelon deployed for an attack on NATO's Allied Forces Central Europe. A Polish Front headquarters was formed in 1958, along with three armies formed from 1955, the First Polish Army, the Second Army, and the Fourth Army, mobilisation-only headquarters that were to be formed within the three districts.[6] The Polish Front headquarters was eventually deactivated in 1990, and the three army mobilisation scheme was likewise abandoned.

Until the fall of communism the army's prestige continued to fall, as it was used by the communist government to violently suppress several outbursts of protest, including the Poznań 1956 protests, the Polish 1970 protests, and protests during Martial law in Poland in 1981–1982. Troops of the Silesian Military District also took part in the suppressing of the 1968 democratisation process of Czechoslovakia, commonly known as the Prague Spring.

In 1989 the Pomeranian Military District controlled the 8th, 12th, 15th, 16th, and 20th Divisions, the Silesian Military District controlled the 2nd, 4th, 5th, 10th, and 11th Divisions, and the Warsaw Military District the 1st, 3rd, and 9th Divisions, plus the 6th Airborne Division earmarked for Front control.[8] The 7th Sea Landing Division was based within the Pomeranian Military District but probably earmarked for Front control. The two districts facing Germany each controlled four divisions in 1990, which had been recently reorganised, in line with the late 1990s Soviet defensive doctrine, from a 3:1 mix of motor rifle : tank regiments into a 2:2 mix of motor rifle and tank regiments.[9] The Warsaw Military District in the east controlled only the 1st Mechanised Division. Two other mechanised divisions in that district had been disbanded in 1988. There was also the 6th Airborne Division and the 7th Sea Landing Division, possibly intended to form part of a Warsaw Pact attack on Denmark, to open the Baltic straits to the North Sea and beyond. Strength counted 205,000 personnel of which 168,000 were conscripts.

Following the end of the Cold War the Wojska Lądowe was drastically reduced and reorganised. In 1992, the Kraków Military District was recreated. From nine divisions, the total was planned in 2001 to fall to four, plus six independent brigades.[10] Since January 1, 1999, Poland has been divided into two military districts. These are the Pomeranian Military District (Pomorski Okręg Wojskowy) with HQ in Bydgoszcz, covering northern Poland, and the Silesian Military District (Śląski Okręg Wojskowy) with HQ in Wrocław, covering southern Poland. However on September 1, 2011 the 1st Warsaw Mechanised Division was disbanded.

General Edward Pietrzyk served as commander of the Polish Land Forces from 2000 to September 2006. He was succeeded by General Waldemar Skrzypczak (2006–2009).

From the 1950s the Polish Land Forces have contributed troops to peacekeeping operations, initially the Neutral Nations Supervisory Commission in Korea. Poland contributed troops to UNIFIL in Lebanon since 1982, but it was announced in April 2009 that Polish troops would withdraw completely by October 2009.[11] Poland sent a divisional headquarters and a brigade to Iraq after the 2003 Iraq war. Poland sent ten rotations of troops, manning a significant portion of Multinational Division Central-South. At its peak Poland had 2,500 soldiers in the south of the country. Poland deployed about ten attack and transport helicopters as part of its force in Iraq between 2004 and 2008.[12] These helicopters formed the Independent Air Assault Group (pl:Samodzielna Grupa Powietrzno-Szturmowa). The division was disbanded in 2008, though Polish advisory and training personnel, seemingly a Military Advisory Liaison Team (MALT) stayed until at least 2011 (see pl:PKW Irak). One of the most recent missions was MINURCAT in Chad and the Central African Republic, where Poland despatched troops from 2007–2010. Among the deployed troops were two Reconnaissance companies, a Military Gendarmerie unit, a component of the 10th Logistics Brigade, elements of the 5th Military Engineers Regiment, and three Mil Mi-8 helicopters.

Main article: List of equipment of the Polish Land Forces