Pinal Airpark's primary function is to serve as a boneyard for civilian commercial aircraft, where the area's dry desert climate mitigates corrosion of the aircraft. It is the largest commercial aircraft storage and heavy maintenance facility in the world.[4] Even so, many aircraft which are brought here wind up being scrapped. Nearby the 309th Aerospace Maintenance and Regeneration Group at Davis-Monthan Air Force Base provides the same service to the United States federal government.

Built in 1942 by the Sundt and Del Webb Construction Companies and opened in March 1943, the facility was known as Marana Army Air Field. During World War II, the airfield was under the command of the 389th Army Air Force Base Unit, AAF West Coast Training Center and used as a training base, as part of the 50,000 Pilot Training Program.

Marana conducted basic flight training and the training of transport pilots in instrument flying and navigation, being the home of the 3024th (Pilot School, Basic). Chinese pilots were also trained there. Five satellite airfields were established for Marana during World War II:

The infrastructure installed at Marana during World War II was extensive. This included water, sewer, and gas systems that were still used until some problems developed in the 1990s. There was also a massive storm drain system. The airfield also had a railroad spur line and railroad station.

Marana was closed after World War II and in 1948, after the establishment of the U.S. Air Force as an independent service, Pinal County accepted a deed to the property, subsequent to the Air Force's disposal of most of the buildings, waterlines, gas lines, and electrical lines. From 1948 to 1951, Pinal County leased the property to multiple tenants, and from 1951 to 1956, Marana was reused as a contractor-operated USAF basic flying school, operated by Darr Aeronautical Technical Company.

Marana became the headquarters of all Central Intelligence Agency air operations during the Vietnam War years, when it was the primary facility of Intermountain Airlines, a wholly owned CIA "front" company which was used to supply covert operations in Southeast Asia and elsewhere. Intermountain was infamous for its thinly veiled CIA special ops which included development and use of the Fulton Skyhook, but its cover was its non-scheduled freight and maintenance operations. Marana was the principal continental United States maintenance base for Southeast Asia CIA operations including Air America and Continental Air Services. The Marana facility was subsequently acquired by Evergreen International Airlines which performed aircraft modification and maintenance at the airfield.

One of the more notable aircraft assigned to Marana during its CIA years was a Boeing B-17G Flying Fortress, AAF Serial 44–85531. 531 was registered September 1957 to Western Enterprises, Inc. of Taiwan (founded by the CIA in 1951). In late 1957 missions were staged from Kurmitola Air Field in East Pakistan (now Bangladesh) to parachute agents into Tibet. The aircraft was disassembled for parts at Clark Air Base, Philippines between March and October 1958, and it is believed that this plane was eventually scrapped. The serial number 44-85531 appeared again as registered on another B-17G, 1 September 1960 registered to Atlantic General Enterprise, Washington DC (another CIA front) as N809Z. These registration numbers were then changed to the true numbers of 44–83785. Based again at Marana, this aircraft later flew black operations over Vietnam and was used to retrieve two American agents from an abandoned Soviet scientific base in the Arctic using the Fulton Skyhook in Operation Coldfeet.[6]

The airport is home to many private companies including: Ascent Aviation Services,[7] Aircraft Demolition, and Jet Yard.[8]

Since the early 2010s, airport economic development director Jim Petty has opened the facility to the public, giving free tours of the airport and the airplanes stored there.[9]

Pinal Airpark and SAHP also hosts the US Special Operations Command's Parachute Training and Testing Facility.[14] On 28 March 2013, Navy SEAL Brett Shadle was killed during parachute training here and another SEAL was injured.[15] 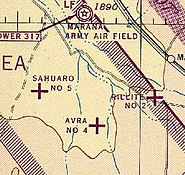 A Boeing 757 being parted out at Pinal Airpark