The Army Reserve Command (ARESCOM or RESCOM; Tagalog: Pangasiwaan ng Panlaáng Kawal ng Hukbóng Katihan or PPKHK) is a Major Support Commands of the Philippine Army. It was created for the sole purpose of Reserve Force management, procurement, and organisation.

The utilization and management of Reserve Forces in the Philippines started when Rajah Lapu-Lapu, chieftain of the Mactan Island, Cebu, rallied his troops and defeated the Spanish invaders lead by Fernando Magallanes in the year 1521. Due to his actions as the local village chief, Rajah Lapu-lapu and his townsfolk became the very first reservists that saw action in defending the Philippines.[1][2]

By 1935, the Philippine Commonwealth, under the leadership of President Manuel Luis Quezon enacted the very first legislature of his government. Commonwealth Act Nr. 01 ensured that Philippines will be prepared to thwart off any invasion or aggression of some sort by any nation, or entity and thus called upon its citizens to provide manpower to then fledgling Philippine Army. The National Defense Act of 1935 heralded the creation of what would be the Armed Forces of the Philippines and very first documented account of voluntary citizen enlistment.[3][4]

Reservists fought hard during the 1940s and saw action on almost all parts of the country in World War II. Regular and reserve members of then Philippine Army/Philippine Army Air Corps (forerunner of the Phil Air Force), the Philippine Constabulary, and the Philippine Offshore Patrol (what would become the Phil Navy later on.) were incorporated with US units and rallied under the banner of the USAFFE.[1]

A ragtag group of former ROTC Cadets, Guerilla Fighters and draftees of the Philippine Army Reserve Force formed units among themselves and fought gallantly against the Japanese invaders. Collectively, they were known as the Hunters ROTC Unit.[5]

Post WWII saw the re-organization of the AFP and the further need to rebuilt the defense of the nation. Reserve units were then organized to Battalion Combat Teams with the sole purpose of force augmentation in the eventuality that another world war ensues.[4]

On September 1, 1977, the Army Reserve Command was activated pursuant to General Orders No. 250 of the Philippine Army. Army officers were tasked to organized, train, and manage a reserve force that will equate or surpass the current strenght of its regular forces.[1]

By 1986, after the infamous EDSA Revolution, the unit was shortly deactivated since the AFP at that time will undergo retraining and re-organization.

The Birth of the Mordern Reserve Force

1991 saw the birth of a new reserve force when Republic Act 7077 (Reservists Act of 1991) was signed into law on July 1, 1991. This new legislation directed the AFP to organize and create units with the sole purpose of reservists management.[4]

On May 12, 1992, the Reserve Command, Philippine Army, was again reactivated pursuant to HPA General Orders No. 392 and was later again renamed as the Army Reserve Command on October 1, 1999 (HPA GO Nr 1300) and was given its marching orders to maintain, administer, develop, train, and organize reservists units to help enhance and sustain National Security and Development.[1]

The Future of the Reserve Force

As the unit enters the dawn of 21st Century, the unit is modernizing itself pursuant to the directives of Headquarters, Philippine Army's transformation roadmap to 2028.[6][7]

Commonwealth Act No. 1, particularly Section II, cites the responsibility of each and every citizen of for the defense of the nation. Citizens may be mobilized in the event the national government declares an act of war or emergency.[8]

Republic Act No. 7077,[9] also known as the Citizen's Armed Force Act or Reservist Law of 1991, is an act passed in to law by the joint house of representatives which clearly provides the policies and procedures in the creation and administration of reservists and reserve units of the Armed Forces of the Philippines.

The Role of Women in the Reserve Force

Section 65, Article X, of RA 7077 clearly defines the right and duty of every able bodied female citizen of the Republic of the Philippines to serve in the Armed Forces of the Philippines. Standards for acceptance of female reservists shall likewise be kept standard like their male counterparts with a few adjustments due to physiological differents with the later.[11]

Training is the major task handled by ARESCOM. Its primary arms are the university/college-based Department of Military Science and Tactics-administered mandatory basic and the optional advanced Reserve Officer Training Corps (ROTC);[18] and the territorial unit-administered Basic Citizen's Military Training (BCMT).

Basic ROTC is the only component required by a tertiary (college) level student to have completed as requirement for completion of the National Service Training Program. Military subjects are provided similar to how military instructions are conducted in the service academies and graduates are automatically enlisted in the reserve force of the particular service branch (Army) administering the training. Advance ROTC is purely voluntary in nature and that Advance ROTC Cadets are provided a modest allowance after passing the requirements for their respective Advance ROTC Examination (PAARE). Completion of Advance ROTC is considered a graduate qualification in Military Science, and such graduates who subsequently progress to the Probationary Officer Training Course (POTC)[19] are commissioned as 2nd Lieutenants.[18]

Other than time-in-grade and merit promotions, rank adjustments are authorised depending on civilian qualifications, as well as their reciprocity to the operating environment.[20]

Basic Citizen's Military Training (BCMT) is a military training course conducted by the Philippine Army through the Army Reserve Command. It is an entry level training course undertaken by Filipino Citizens wanting to enlist in the reserve force.

BCMT instruction is administered by a joint training pool of military instructors from both regular and reserve forces and is usually conducted inside any of the Philippine Army's training camps. Guest instructors are requested from other government agencies and non-government organizations (NGO) for specialized instructions.

Special Basic Citizen's Military Training (SBCMT) is a special course conducted by the Philippine Army in response to a request from a Local Government Unit (LGU). Funding is usually provided for by the requesting agency as compared to regular BCMT which receives funding from the Army.

There are currently two types of reservists in the Armed Forces of the Philippines (AFP) Reserve Force:[11][21]

Categorization of Reservists and Reserve Units

Section 12, Article 5, of Republic Act 7077 breaks down and categorizes reservists and their units based on various criterias cited by this law.[11]

Classification of Reservists and Reserve Units

Section 13, Article 5, of Republic Act 7077 clearly cites the classification of reservists based on their operational readiness for immediate deployment or mobilization.[11]

Commanders of ARESCOM are drawn from both the ranks of Called To Active Duty (CAD) Reserve Officers and Regular Army Officers that graduated from either Officer Candidate School (OCS) and the Philippine Military Academy (PMA).[22]

ARESCOM's unit are divided into several base units, regionally into 13 Community Defense Groups, having three or more Community Defense Centers incorporated into them, and nine Reserve Infantry Divisions. Army ROTC Management falls under their respective RCDGs.[24]

The Following Divisions were subsequently de-activated due to the activation of the two Regular Infantry Division with the laters divisional numerical designation. 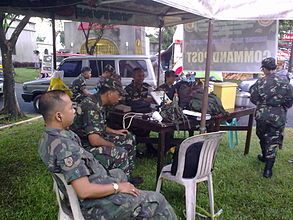 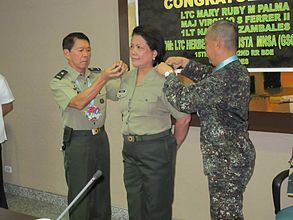 Dr Mary Ruby M Palma of the Quezon City, Gender and Development Resource and Coordinating Office is donned with rank of Lieutenant Colonel in the reserve force, Philippine Army.

UP Village Bgy Captain and Lawyer Virgilio S Ferrer II is promoted and donned with the rank of Major in the reserve force, Philippine Army. 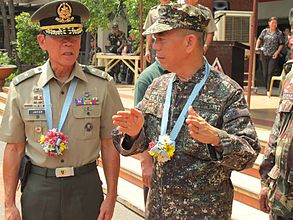