The Petlyakov Pe-2 (Russian: Петляков Пе-2, nicknamed Peshka (Пешка – "Pawn"; also a Russian diminutive for "little Pe")) was a Soviet dive bomber aircraft used during World War II. It was regarded as one of the best ground attack aircraft of the war[2] and it was extremely successful in the roles of heavy fighter, reconnaissance and night fighter.[3] It was one of the most important aircraft of World War II, being in many respects similar to the British de Havilland Mosquito. 11,400 Pe-2s were manufactured during the war, greater numbers than any other twin-engined combat aircraft except for the German Junkers Ju 88 and British Vickers Wellington.[3][4] (Fourth in production numbers was the American Lockheed P-38 Lightning, 10,037 were built). The Pe-2 was fast, maneuverable and durable. Several Communist nations flew the type after the war, when it became known by the NATO reporting name Buck. Six captured Pe-2s were also transferred from the Germans to the Finnish Air Force during the Continuation War, with the serial code PE- and the unofficial nickname Pekka-Eemeli.

The Pe-2 was designed in a prison camp (sharashka); Vladimir Petlyakov had been arrested and imprisoned in 1937 for allegedly deliberately delaying design work on the Tupolev ANT-42 bomber. In the sharashka, Petlyakov was put in charge of a team to develop a high-altitude fighter escort for the ANT-42 under the designation VI-100. The first of two prototypes flew on December 22, 1939 and was a very sophisticated aircraft for its time, featuring a pressurised cabin, all-metal construction, superchargers and many electrically-actuated systems. The prototypes proved so pleasing that production was ordered almost immediately. It is said[citation needed] that Petlyakov and his team could see the VI-100 prototype from their prison as it was put through its paces for the crowds watching the annual May Day parade in 1940.

Just as production was ready to begin, the air force ordered a re-design of the aircraft. The value of tactical bombing had just been displayed by the Luftwaffe in the Blitzkrieg, and the need for such an aircraft suddenly became much more important than the need for a high-altitude escort fighter. Petlyakov's team was given 45 days to redesign their aircraft as a dive bomber. Cabin pressurization and superchargers were deleted, dive brakes and a bombardiers position were added, and other aerodynamic refinements. A fuselage bomb-bay was added, along with smaller bays in each engine nacelle. The aircraft was initially designated PB-100, but Joseph Stalin was impressed enough with Petlyakov to free him, and his name was permitted to be used in the aircraft's designation. The first aircraft flew on December 15, 1940, rushed through production without a prototype under severe threats from Stalin if a Pe-2 did not fly by the end of the year. Deliveries to combat units began the following Spring.

While the Pe-2 generally featured favorable flying characteristics when airborne, it took a good amount of force to pull the elevators up to get the plane rotated off the runway during takeoff. Russian night bombing missions often flew with female pilots and some of the women were not strong enough to get the airplane airborne by themselves. When such a situation occurred, the procedure was to have one of the crew get behind the pilot's seat and wrap her arms around the control wheel and help the pilot pull the wheel back. Once the aircraft was airborne, the crew member returned to her duties and the pilot continued to fly the plane without assistance.[5] Its armament was clearly insufficient, however. The dorsal ShKAS machine gun was inadequate. It had a high rate of fire but it also had 48 ways of jamming.[6] The ventral Berezin UB had a very limited field of view and at the beginning was unreliable too. To give more protection, another ShKAS was added that could be moved between sockets on both sides of the fuselage and, in emergency, the gunner could fire upwards, but in this case he had to be quite strong to keep it in his arms. To improve the bomber's defences, a dorsal Berezin UBT 12,7 mm was mounted. This modification was reported to increase the life expectancy of a Pe-2 from 20 sorties to 54.[7]

The aircraft did not show its true potential until the end of 1941, after the Soviet Air Force had a chance to regroup after the German onslaught during the Winter. The Pe-2 quickly proved itself to be a highly capable aircraft, able to elude the Luftwaffe's interceptors and allowing their crews to develop great accuracy with their bombing.

The records of the 16th and 39th BAPs of the Western Front Air Force note that the Pe-2s crews had the greatest success in repelling the attacks of enemy fighters in June and July 1941. On 1 July, for example, six Pe-2s fended off attacks by four Messerschmitt Bf 109s, shooting down two of them. A week later a group of Pe-2s was attacked by four Bf 109 and again brought down two of the attackers. On both occasions the Petlyakovs suffered no losses. On the southern front, a bombing mission against Ploesti, in Romania, of six Pe-2s, led by Capt. A. Tsurtsulin, was a great success: 552,150 lb of petroleum were burnt in the raid. The Romanian information agency claimed that at least 100 Soviet planes had bombed Ploesti. A German pilot shot down by a Petlyakov over Bobruysk, Maj. A. Mudin of JG 51, affirmed that the Pe-2 was the best Soviet aircraft: "It is a fast aircraft, with good armament, and it is dangerous to enemy fighters." [8] The Pe-2 regiments' operations were not always successful and the service pilots complained about insufficient defensive armament and survivability: there was a great risk of fire and insufficient armour protection, especially for the navigators and gunners. [9] German pilots soon discovered the limited sighting angles of the ventral gun mounting and its poor reliability. The ammo belt of the UBT machine-gun often jammed after the first burst of fire when shooting in extreme positions.[10] The navigator and the radio operator were poorly protected. On average, ten Pe-2 gunners were wounded for every pilot, and two or three were killed for the loss of one pilot.[10] Throughout 1942 the design was steadily refined and improved, in direct consultation with pilots who were actually flying them in combat. Improved armour protection and a fifth ShKAS machine-gun were installed and fuel tanks modified.[10] Western sources use mark Pe-2FT for production series after 83 (where FT stands for Frontovoe Trebovanie (Frontline Request)), although Soviet documents do not use this identification. Final versions Pe-2K (transitional version of Pe-2I) and Pe-2I were produced in small numbers, due to the unwillingness of Soviet industry to decelerate production numbers.

In 1941, after the outbreak of Continuation War Finland purchased six war booty Pe-2 aircraft from Germany. These arrived at State Aircraft Factory facilities at Härmälä in January 1942, where the airframes were overhauled and given Finnish serial numbers. The seventh Pe-2 was bought from the Germans in January 1944, and it was flown to Finland at the end of the month.

It was initially planned to use these planes as dive bombers in the 1st flight of LeLv 48, which began to receive its aircraft in July 1942, but during the training it was found out that this caused too much strain for the engines. Thus, the role of Pe-2s was changed to fly long-range photographic and visual reconnaissance missions for the Army General Headquarters. These sorties began in late 1942, and were often flown with two 250 kg (551 lb) bombs for harassment bombing and in order to cover the true purpose of missions.

By the time the Soviet Fourth strategic offensive started in June 1944, the secondary bombing role had already ended and the surviving Pe-2s began to be used solely at Karelian Isthmus in escorted (normally by four FiAF Bf-109 Gs) photographic reconnaissance flights in order to find out enemy troop concentrations. These vital missions were flown successfully, allowing artillery and Finnish Air Force and Luftwaffe's Gefechtsverband Kuhlmey's bombers to make their strikes against the formations preparing for attack, which had an important impact on the outcome of the Battle of Tali-Ihantala, where the Soviet advance was halted.

During the Continuation War, three Pe-2s were lost in accidents or technical failures, one was destroyed in bombing of Lappeenranta airfield, one was shot down by Soviet fighters and one went missing in action. In the Lapland War the only remaining machine flew a single reconnaissance sortie in October 1944. On average, the aircraft flew some 94 hours per plane during the war. The sparse usage was due to difficulties with obtaining spare parts.

The Finnish Air Force also operated one Petlyakov Pe-3 (PE-301) that had been captured in 1943.

PE-301 and PE-215 were destroyed when Soviet aircraft bombed the Lappenranta airfield on 2 July 1944. PE-212 went down in 1943, PE-213 was destroyed in an emergency landing in 1942. PE-214 was destroyed in a failed take-off attempt at Härmälä on 21 May 1942: as Härmälä airfield was quite short, the pilot had to try to lift off with too little speed, which caused the aircraft to stall and crash, killing the crew. PE-217 managed to shoot down a Soviet fighter in 1944. PE-216 was destroyed in a forced landing in 1944. PE-211 survived the war and was removed from FAF lists in 1946. It was still standing beside the Kauhava airfield in 1952, but further information on its fate is unknown.[11]

In total, around 11,400 Pe-2s were built, large number of minor variants were also developed. 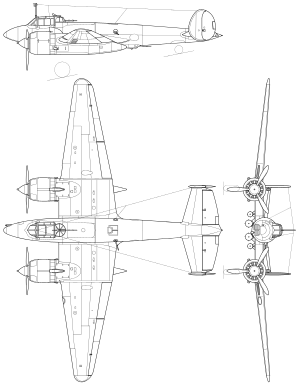