Military Wiki
Register
Don't have an account?
Sign In
Advertisement
in: Pages with script errors, Articles incorporating text from the Air Force Historical Research Agency, Articles that were deleted in Wikipedia,
and 6 more

Perrin Air Force Base' is an inactive United States Air Force base, approximately 7 miles northwest of Sherman, Texas. It was active during World War II as pilot training airfield and during the Cold War as a combat crew and flying training base. It was closed on 30 June 1971.

After seeing the fighters take off from here, a young Chesley Sullenberger became interested in flying.[1] [2]

Perrin Air Force Base began as an Army Air Field and was the first basic flying training school to become operational after the Japanese attack on Pearl Harbor on 7 December 1941.

On 16 June 1941, the Office of the Chief of the Air Corps drew up a program for construction. A tentative authorized strength of 199 officers, 422 cadets, 1730 enlisted men, and funds in the amount of $3,966,833.00 were ordered and set aside for the construction of the airfield. The lease was signed by the United States Government and Grayson County on 1 July 1941 and the Army Corps of Engineers started construction on the newly established Grayson Basic Flying School the same week.

On 9 August 1941, Major Robert J. Warren was the first person to report to duty at the partially constructed airfield, assuming duties as project officer and temporary Commanding Officer. Ten days later, five enlisted men arrived from San Angelo, TX, to assist Major Warren in the development of the airstrip, hangars, barracks, and field headquarters building. The airfield was laid out with four runways in a triangle pattern, consisting of 4500x150(N/S), 2700x150(NE/SW), 4200x150(E/W), 5137x150(NW/SE), all constructed of concrete. A large parking apron was constructed to accommodate the planned basic (phase II) training aircraft with at least 6 maintenance hangars and supporting buildings. East of the airfield, a ground support station was constructed consisting of about several hundred buildings based on standardized plans and architectural drawings. The buildings were designed to be the "cheapest, temporary character with structural stability only sufficient to meet the needs of the service which the structure is intended to fulfill during the period of its contemplated war use." To conserve critical materials, most facilities were constructed of wood, concrete, brick, gypsum board and concrete asbestos. Metal was sparsely used. Perrin Field was designed to be nearly self-sufficient, with not only hangars, but barracks, warehouses, hospitals, dental clinics, dining halls, and maintenance shops were needed. There were libraries, social clubs for officers, and enlisted men, and stores to buy living necessities.

In addition to the main airfield, there were four auxiliary airfields constructed to support the flying training at Perrin Army Airfield:

On 21 August 1941, the first aircraft, a Vultee BT-13 Valiant arrived at the newly constructed Grayson Basic Flying School. The airfield was officially activated on 20 September 1941 by the Army Air Forces Training Command, Gulf Coast Training Center. It was placed under the jurisdiction of the Army Air Corps Pilot School (Basic) activated. The mission of the new airfield was the training of aviation cadets in the basic (intermediate) phase of flying training (phase 2).

On 7 December 1941, the strength of the airfield stood at 90 officers and 545 enlisted men, with the first class of cadets expected by the end of December. In January 1942, the installation was renamed Perrin Field in memory of the late Lieuteant Colonel Elmer D. Perrin, a native Texan who had been killed in a 21 June 1941 crash during an acceptance test of a B-26 Marauder bomber near the Glenn L. Martin aircraft plant in Baltimore, MD.

On 8 January 1943, the War Department constituted and activated the 32d Flying Training Wing (Basic) at Perrin and assigned it to the AAF Central Flying Training Command.

Basic pilot training was discontinued at the base in late 1945, and an instructor school was established to maintain instructor proficiency and provide refresher training for oversea returnees and behind-the-line pilots, but the base was deactivated in November 1946. Perrin became a storage facility for aircraft such as the AT-6 Texan trainer, the B-25 Mitchell bomber, and other equipment, such as tractors and bulldozers. The only operational aircraft was the C-47 Skytrain.

On 1 April 1948, Perrin Field was reactivated under the newly established United States Air Force, hosting the 3555th Basic Pilot Training Wing from August 1948 to June 1952. A shortage of funds forced ATC to open the base with only a caretaker group on hand. Three months later, on 1 July, the base began training. Training squadrons under the 3555th PTW were:

It resumed its mission of basic single-engine pilot training under the Air Training Command (ATC) and continued until December 1951. Beginning in January 1952, Perrin began advanced single engine pilot training, flying the T-28 Trojan. This training ended in December 1952. In March 1952, A-26 Invader medium bomber training was transferred and conducted at Perrin.

Beginning in 1951, NATO/Allied students began pilot training at Perrin, which continued until 1962 when this role was transferred to the flying training wing at Sheppard AFB, TX. On 17 July 1952, Perrin was designated a permanent Air Force installation and its name officially changed to Perrin Air Force Base. Perrin was transformed to crew training role for all-weather fighter interceptors and longer 8000 and 9,000-foot (2,700 m) runways were built to accommodate the T-33 Shooting Star and F-86 Sabre that arrived in December 1952.

In July 1962, Perrin was transferred from ATC to the Air Defense Command (ADC) and the 4780th Air Defense Training Wing absorbed the ATC 3555th Training Wing which was inactivated. The 4780th conducted training in the F-102 and TF-102 Delta Dagger. The training squadrons were re-designated as follows, transferring personnel and equipment to the new units:

From 1962 to 1971, Perrin had the largest fleet of F-102s in the U.S. Air Force and became the only F-102 replacement training base within the Air Defense Command, which was later redesignated the Aerospace Defense Command (ADC) in January 1968.

In October 1962, during the Cuban Missile Crisis, a number of Perrin AFB aircraft were placed on alert, while others were deployed to bases in Florida for alert and air defense missions.

The 4780th had two flying squadrons, the 4781st and 4782nd Combat Crew Training Squadrons. In 1964, the 4780th Air Defense Wing was chosen to host the Air Defense Command Life Support School at the nearby Lake Texoma. The school was initiated to give life support and ejection training to aircrews flying ADC aircraft and Air National Guard units that supported the ADC mission. Prior to the school's establishment, ADC had a 22% aircraft mishap fatality rate, but after the first year it fell to 5%. 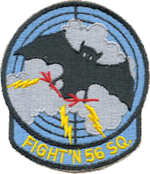 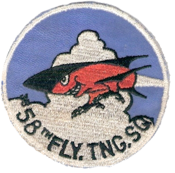 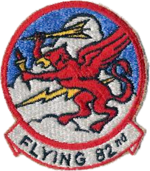 On 3 March 1971, it was announced that Perrin AFB would close due mainly to a change in pilot training requirements, primarily the retirement of the F-102 from front-line service. In addition to the phaseout of the F-102, airspace congestion following the opening of the new Dallas-Fort Worth International Airport was also considered to be a secondary factor. On 13 May 1971, the last graduating class flew its F-102s in formation over Sherman and Denison as a farewell to its two host cities. A few days later, the last of the F-102 Delta Daggers left the base and the 4780th Air Defense Wing was deactivated. On 15 May the T-37 instructor pilot training transferred to Randolph AFB in Universal City, Texas near San Antonio.

The closed Perrin Air Force Base was turned over to the Grayson County Community College and to the County of Grayson. The name of the field was changed to Grayson County Airport, which, in November 2007, was renamed to North Texas Regional Airport. Today, in addition to serving as a general aviation airport, several businesses, as well as a juvenile detention center/boot-camp and adult probation center are built upon former barracks and nearby areas. Grayson County College uses several of the buildings for its course offerings. The college also operates the former base golf course.

Today, a small group of local Sherman and Denison citizens have held the memory of Perrin together, hosting nine Perrin Field reunions since the early 1980s. The Perrin AFB Research Foundation was established in 1998. There is a small museum dedicated to the former Perrin Air Force Base at the airport.