The Esquadrão Aeroterrestre de Salvamento (EAS) (English: Airborne Rescue Squadron), known by its nickname Para-SAR, is a Brazilian Air Force airborne search and rescue squadron, based in the city of Rio de Janeiro.

The unit has no aircraft of its own and its airborne personnel conduct operations by being dropped from other units' aircraft. The unit has seven SAR teams located in seven states.

Each Para-SAR detachment is made up of SAR qualified military parachutists. Members of this unit can be distinguished by their maroon berets and orange baseball caps.[1]

The Brazilian Air Force has a long history of parachute training. In 1943, at the former Alfonsos Field School of Aeronautics and with the support of the Air Force, cadet gymnastics instructor Achile Garcia Charles Astor first introduced civil parachute training in Brazil.

Seeing the usefulness of having a parachuting unit, the Electronics and Flight Protection Administration conducted studies to see how such a unit could be created under the auspices of the air force. The results of that study gave rise to the Para-SAR.

The group initially consisted of a division of three officers and five sergeants whose mandate was to provide instruction to the cadets of the School of Aeronautics and to provide search and rescue, by means of the DEPV. The unit also consisted of a group of volunteers who trained at the old military aviation school and went on to provide help in accidents and under special circumstances.

Eventually, on 2 September 1963, the Airborne Rescue unit was formed. Para-SAR is the traditional name given to the search and rescue arm of the air force and is housed in the old School of Aeronautics.

By November 20, 1973, the flotilla no longer existed, becoming the Airborne Rescue Squadron, or EAS. Its mandate was to continue training of the BAF parachutists, the instruction and the administration of the rescue teams and helicopter squadrons among other tasks.[2]

The Para-SAR mandate includes specialized instruction for crewmembers and rescue teams of the Brazilian Air Force, SAR and special operations.[3]

New members of the squadron start with the Brazilian Army parachute course and then complete courses such as parachute packing and maintenance, aerial resupply, demolition, sniper and jungle warfare. They then move onto advanced training. The following training programs are offered by the squadron:

Graduates become qualified in scuba diving which is typically used to recover charges and pieces of submerged aircraft.[5]

Graduates are qualified to parachute out of a military aircraft as well as air drop supplies, precision landing, calculate the effects of wind and carry out the pathfinder role. They also learn packing, inspecting and repairing parachutes. Also taught are techniques for aircraft operations using the Lockheed C-130 Hercules and C-95.[6]

The course teaches parachutists operational skydiving, the use of instruments and equipment; skydiving from both low and high altitudes and jumping with weapons and equipment for military operations.[7]

Graduates of this course become qualified in all aspects of skydiving, from organizing the jump team to coordinating the aircraft to be used. Students are also given a knowledge of meteorology and reading weather reports as well as precision targeting, advanced navigation skills and techniques of free fall Basic Body Fly.[8] 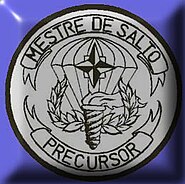