The unit originally started out as a ceremonial guard unit in the 1920s and by the late 1930s had grown into a regiment of the German Army. The regiment would later be expanded and renamed Infantry Division Grossdeutschland in 1942, and after significant reorganization was renamed Panzergrenadier Division Großdeutschland in May 1943. And later in November 1944, while the division retained its status as a panzergrenadier division, some of its subordinate units were expanded to divisional status, and the whole group of divisions were reorganized as Panzerkorps Großdeutschland.

The roots of the unit go back to 1921 when the guard unit of the city of Berlin (Wachregiment Berlin) was created. The unit was used for ceremonial and representative duties such as parades and guard duties in the capital. The unit was later reformed as Kommando der Wachtruppe[notes 3]. The unit grew in size, function and responsibility throughout the 1930s. In the first week of 1939, Hitler ordered that the unit be renamed Infanterie-Regiment Großdeutschland.[notes 4] The unit was now a permanent cadre, and unlike other regiments of the German Army (which were raised from a particular region), the recruits of the Großdeutschland were to be drawn from across the nation. The unit was officially activated on 14 June 1939, and the occasion was marked by a parade through the streets of the capital.

The regiment saw action in France in 1940. It was attached to Panzer Group 2 in the opening phases of Barbarossa, and was nearly annihilated in the vicious fighting outside of Moscow in late 1941. On the last day of February 1942, Rifle Battalion Grossdeutschland (all that was left of the original regiment) was disbanded and two battalions formed a new Grossdeutschland Regiment out of reinforcements arriving from Neuruppin. The Regiment later moved to Orel after, and on 1 Apr 1942, arising out of the need for new motorized formations for the summer offensives of 1942, an announcement was made at a regimental parade at Rjetschiza: "Effective immediately, the former Infantry Regiment Grossdeutschland is expanded to the Infantry Division Grossdeutschland."[1] 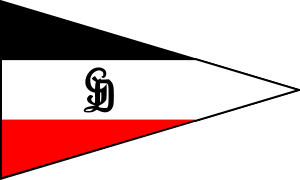 After the reorganization, the Großdeutschland Division was assigned to XLVIII. Panzerkorps during the opening phases of Fall Blau, the assault on Stalingrad. The division took part in the successful attacks to cross the upper Don river and to capture Voronezh. In August, the division was pulled back to the north bank of the Donets and held as a mobile reserve and fire-brigade counterattack force. During the combined Soviet winter offensives Operation Uranus and Operation Mars, the Division was involved in heavy winter fighting near Rzhev. The Division sustained heavy losses in the Rzhev salient, effectively making the division combat ineffective. It was pulled out of the lines and refitted.

In January–February 1943, Grossdeutschland and XLVIII.Panzerkorps, along with the II SS Panzer Corps took part in the Third Battle of Kharkov. The division fought alongside the 1.SS Division Leibstandarte SS Adolf Hitler, 2.SS Division Das Reich and 3.SS Division Totenkopf during these battles. After the fall of Kharkov, the Grossdeutschland was again pulled back and refitted.

In May 1943, with the addition of armoured personnel carriers and Tigers the division was redesignated Panzergrenadier Division Grossdeutschland,[2] though in reality it now had more armoured vehicles than most full strength panzer divisions.

The newly re-equipped division was subordinated to the XLVIII Panzer Corps (which is part of Fourth Panzer Army commanded by Hermann Hoth), and was to play a major role alongside the II SS Panzer Corps in Operation Citadel - the German offensive to sever the Kursk salient. During the buildup period, a brigade of two battalions equipped with the new tanks, Panther Ausf. D, was integrated into the OOB of Großdeutschland Division. After the launch of Operation Citadel, the division was heavily engaged in the fight to penetrate the southern shoulder of the salient. The new Panthers were plagued by technical problems, suffering from engine fires and mechanical breakdowns, with many becoming disabled before reaching the battlefield. The Grossdeutschland Division did not take part in the epic tank battle of Prokhorovka, and the Panther tanks were not engaged as most were broken down by the time the battle started. The division fought on until it was pulled back to Tomarovka on 18 July 1943.

After the Kursk offensive was cancelled, the division was transferred back to Heeresgruppe Mitte, and resumed its role as mobile reserve. The Tiger tank company was expanded to an entire battalion, becoming the III. Battalion of the Panzer Regiment. Grossdeutschland saw heavy fighting around Karachev before being transferred back to XLVIII Panzer Corps in late August. For the rest of 1943, Grossdeutschland was engaged in the fighting withdrawal from the eastern Ukraine, taking part in battles around Kharkov, Belgorod, and finally on the Dnieper, ending the year fighting strong enemy forces near Michurin-Rog, east of Krivoi-Rog. It was during this period that the division earned the nickname die Feuerwehr (The Fire Brigade).

Grossdeutschland continued fighting in the area of Krivoi-Rog early in January 1944 until it was transferred west for rest and refit. During this period, 1./Panzer Regiment 26 (Panther) joined the Panzer Regiment Grossdeutschland, and Grossdeutschland's I. Bataillon moved to France to refit and train with the new tanks; they did not rejoin the Division until after the Normandy invasion.

Over the next months, the division continued moving from crisis-point to crisis-point across the front. Panzer Regiment Grossdeutschland saw action in the battles to relieve the Cherkassy pocket in late January 1944 while the rest of the division was involved in heavy fighting from the Dniester to Northern Bessarabia. On 4 March 1944 the First, Second and Third Ukrainian Fronts launched a major attack on the north, central and southern flanks of Army Group South, and Grossdeutschland moved to Kirovgrad, bolstering weak parts of the line until withdrawn to Rovnoye to the southwest. On 16 March the division began the move to the Dniester River, and by the end of March had entered Romania.

In April 1944, Grossdeutschland. as a part of LVII.Panzerkorps. fought defensive battles near Iaşi, including the First Battle of Târgu Frumos, slowly retreating to Târgul Frumos in Moldavia. Fighting in the region raged for over a month. A renewed Soviet offensive began on 2 May, aimed at breaking through Grossdeutschland and onto the Romanian oil fields. The defensive action at the Second Battle of Târgu Frumos was the focus of several NATO studies during the Cold War.

In mid May, the infantry and reconnaissance components of the division were equipped with armored personnel carriers (Schützenpanzerwagen) and other armoured vehicles. The Füsilier regiments were downsized from four battalions to three. The division was then sent back to the front, where it was involved in the fighting around Podul Iloaiei. After a brief rest in early July, the division was again committed to heavy fighting in northern Romania.

In late July, the division was transferred to East Prussia. Over the next months, Grossdeutschland was involved in heavy fighting in both East Prussia, including a successful counter-attack on Wilkowischken and the Baltic States, suffering immense casualties in both men and materiel. The division was virtually annihilated during the battles in the Memel bridgehead.

In November 1944, while the division retained its status as a Panzergrenadier division, several attached units were expanded to divisional status, and the Panzerkorps Großdeutschland[notes 5] was formed.

The Corps was made up of primarily two Divisions - Großdeutschland and the Brandenburg Division which have its origins strongly linked to the Großdeutschland.

By March 1945, the Panzergrenadier Division Grossdeutschland had been reduced to around 4,000 men. These escaped by ferry from the collapsing Memel bridgehead. They landed at Pillau and were put straight back into combat. By 25 April 1945, the division ceased to exist, having been completely destroyed in the battles around Pillau. Of the survivors only a few hundred were able to make their way to Schleswig-Holstein and surrendered to British forces. The majority of the men were left behind and were forced to surrender to the Russians where they often faced a death or indefinite amount of time in Soviet labor camps.

Panzergrenadier Division Kurmark had been created out of Grossdeutschland remnants in early 1945 and had fought throughout the last months of the war. Men of both the Brandenburg and Kurmark units were entitled to wear Großdeutschland insignia.

The unit became known in the West through the book The Forgotten Soldier, by the Alsatian veteran, Guy Sajer (a pseudonym), who served as a volunteer. The book was first published in 1967 in France as Le Soldat Oublié. While the historical accuracy of Sajer's autobiographical work has been questioned, it nevertheless offers a vivid and moving account of the horrors of war on the Eastern Front.

An account was written by Alfred Nowotny, entitled The Good Soldier, which focuses on both his experiences in Panzerfüsilier Regiment Grossdeutschland from 1944, but also his captivity in the Soviet Union after the German surrender. Jurgen Herbst, emeritus professor of history at the University of Wisconsin, recounts his experience as a young volunteer who joined the Division in 1945 in his book Requiem for a German Past.

Additionally, Dr Hans Rehfeldt's own memoirs, entitled Mortar Gunner on the Eastern Front, detail his extensive service with the Division from its days as a Regiment in 1941, through the formation of the full Division and service to the end of war. His memoirs are issued in two volumes, Volume I: From the Moscow Winter Offensive to Operation Zitadelle and Volume II: Russia, Hungary, Lithuania and the Battle for East Prussia.

The book German Army and Genocide (ISBN 1-56584-525-0) mentions the following incident, from the invasion of Yugoslavia:

When one German soldier was shot and one seriously wounded in Pancevo, Wehrmacht soldiers and the Waffen SS rounded up about 100 civilians at random...the town commander, Lt. Col. Fritz Bandelow conducted the Court's Martial...The presiding judge, SS-Sturmbannführer Rudolf Hoffmann sentenced 36 of those arrested to death. On April 21, 1941, four of the civilians were the first to be shot...On the following day eighteen victims were hanged in a cemetery and fourteen more were shot at the cemetery wall by an execution squad of the Wehrmacht's Großdeutschland regiment.

Part of the photographic presentation for the book includes a photo where the Großdeutschland cuff title on the officer is clearly visible. The official Großdeutschland history by Helmuth Spaeter mentions that only "draconian measures were occasionally required to halt looting by the civilian population" in Belgrade. The events of 21 April in Pancevo are not discussed directly, though many references are made to "security duties" in Yugoslavia.

Order of Battle as of September 1943

maps and the divisional war diary, liaison with neighbouring units, and structuring component units of the division.

On formation of Grossdeutschland as a Panzergrenadier Division, a 219 man Divisional Escort Company was added to Divisional headquarters. Modelled after the escort companies of Waffen SS Divisions, this unit was intended to guard divisional headquarters, serve as a mobile reserve, and was in essence a small battle group suited to all operational circumstances. It included, according to varying sources, some or all of the following:

Military Police Troop - Numbering one platoon of men, the Military Police detachment (recruited like the rest of the Army's MPs from civilian police) were equipped with light cars and motorcycles. Almost all military policemen not holding officer rank were NCOs (Unteroffizier or higher) excepting some drivers, in order to provide authority for their duties - including maintenance of discipline, but most importantly collection of prisoners and traffic control duties. Grossdeutschland had several hundred motorized vehicles which had to be moved over great distances both rapidly and efficiently.

Responsible for recruitment and propaganda literature. Grossdeutschland was unusual in having its own correspondents permanently assigned to the division.

As for Panzergrenadier Regiment Grossdeutschland, above

Reorganizations in June 1943 involved renumbering the 3.7 FlaK batteries 1 and 2, and the addition of 6 Battery

Upon expansion to a panzergrenadier Division, this battalion adopted golden-yellow waffenfarbe and cavalry traditions for all its companies.

This company was outfitted with armoured personnel carriers after Kursk.