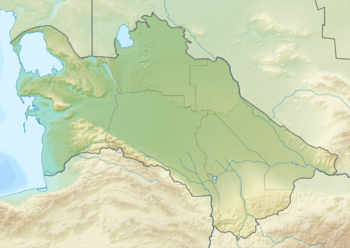 to Herat
Panjdeh Incident on a map of modern Turkmenistan

The Panjdeh incident of 1885 was a diplomatic crisis between the British Empire and the Russian Empire caused by the Russian expansion south-eastwards towards the Emirate of Afghanistan and the British Raj (India). After nearly completing the Russian conquest of Central Asia (Russian Turkestan) the Russians captured an Afghan border fort. Seeing a threat to India, Britain came close to threatening war but both sides backed down and the matter was settled by diplomacy. The effect was to stop further Russian expansion in Asia, except for the Pamir Mountains and to define the north-western border of Afghanistan.

After the Battle of Geok Tepe in January 1881 and the annexation of Merv in March 1884, Russia held most of what is now Turkmenistan. South of Merv, towards Herat in Afghanistan, the border was not clearly defined. The British were concerned because the line Merv–Herat–Kandahar–Quetta was a natural invasion route to India. The Russians had begun to build Trans-Caspian Railway which would allow them to bring men and supplies to Merv and beyond.

Most of Turkmenistan is desert but irrigation supports a fairly dense population on the north slope of the Kopet Dag (Geok Tepe and Ashgabat). East of this are the oases of Tejend and Merv, one of the great cities of central Asia. Tejend was much smaller and to the south of Tejend and Merv is a grassy region sometimes called Badghis which is bounded by the Hari-Rud river on the west and the Murghab River to the east. The Hari-Rud flows north along the modern Iranian border, enters Turkmenistan and spreads out forming the Tejend oasis before drying up in the desert. The Murghab flows north through what is now Afghanistan and Turkmenistan, reaches Yoloten and spreads out, forming the Merv oasis. Where the Murghab crosses the current border, the irrigated area of Panjdeh (Five Villages) existed. Badghis was about 100 mi (160 km) wide and 75–150 mi (121–241 km) long from north to south, depending on where the boundaries are set. South of Badghis is the important Afghan city and border fort of Herat.

At the time of the Panjdeh incident it was generally agreed that the northern frontier of Afghanistan started from the Persian border at Serakhs and ran about 270 mi (430 km) east-north-east to meet the Oxus at Khoja Sale, an old name for the point where the Oxus now leaves Afghanistan. This border had never been properly defined.

In 1882 Britain and Russia began discussions about the Afghan boundary. In the summer of 1884 they agreed to form an Afghan Boundary Commission, the commissioners being Generals Zelenoi and Sir Peter Lumsden. They were to meet at Serakhs in October but both were delayed. The Russians tried to push the border as far to the south as possible south before it became fixed. General Komarov, governor of the Transcaspian Oblast, went south to Serakhs and expelled a Persian garrison in the east side of the Hari-Rud. The Russians occupied Pul-i-Khatun 40 mi (64 km) south in Afghan territory. Later they occupied the pass or canyon at Zulfikar and a place called Ak Robat about 50 mi (80 km) to the east. On the east side, the Sarik Turkomans of Yoloten submitted in May 1884 but their kinsmen at Panjdeh refused, saying that they were subjects of the Amir of Kabul. The Afghans sent troops to Bala Murghab and in June began building a fort at the north end of Panjdeh at the mouth of the Kushk River, which they called Ak-Tepe (White Hill; probably the old fort visible from space at 36°02′14″N 62°44′54″E﻿ / ﻿36.0371°N 62.7483°E﻿ / 36.0371; 62.7483). The Russians thought that the Afghans had done this with British connivance but the Afghans and British claimed that the people of Panjdeh had always paid tribute to the Afghans or whoever controlled Herat. The Russians claimed that Panjdeh had never been garrisoned and that its people were part of a tribe that had submitted to Russia. On 8 November, Lumsden arrived at Serakhs with 250 Sepoys and 200 Bengal Lancers, having crossed little-known country in Baluchistan. Komarov avoided meeting him, having more serious things to do. In mid-November, Komarov made a threatening movement up the Murghab toward Panjdeh and more Afghan troops were moved up. the Russians built an advanced post at Sanduk Kuchan (Sandykgachy?) on the Murghab. Alikhanov went to parley with the Ak Tepe commander but was driven away with threats. The Afghans sent a detachment to occupy Sary Yazy 10 mi (16 km) south of the Russian outpost.

For a few months there was a lull, then in February 1885 the Russians occupied a post 3 mi (4.8 km) south of Sary Yazy. Lumsden advised the Afghans to withdraw further south. Russia next built a fort at Kazyl Tepe (Red Hill) about 2 mi (3.2 km) south of Ak Tepe and a mile south of Pul-i-Khishty (Brick Bridge) across the Kushk. On 25 March, Komarov arrived at Kazyl Tepe with 1,500 men and two days later they advanced, apparently trying to provoke the Afghans into firing first. On 30 March 1885 the Russians captured Ak Tepe with a reported loss of 900 Afghans and 11 Russians.[1] The news reached England on 7 April and preparations for war began. On 27 April, Gladstone asked the Commons for a credit of £11 million (£4.5 million for Sudan and the rest for Russia). Alexander III of Russia suggested arbitration and negotiations, which the British accepted. The crisis was partly averted by the wisdom of Abdur Rahman Khan the Amir of Afghanistan, who was then at Rawalpindi talking to the British. Having no wish to see two foreign armies fighting in his country, when told of Panjdeh he pretended to see it as a mere border skirmish. In mid-summer Lord Salisbury replaced Gladstone, which may have made British threats more credible. By 10 September, it was roughly agreed that Russia would keep Panjdeh, give up Zulfikar and that the border would be approximately where it is now. The border commissioners started at Zulfikar on 10 November, reached the Murghab by Christmas and went into winter quarters. In 1886 the line was run from the Murghab to the Oxus. Some minor problems had to be re-esolved by diplomats and the final protocol was signed on 22 July 1887. Persia somehow retained the Atak country north-west of Serakhs into which Russian patrols had penetrated.

Britain did not aid Afghanistan, in violation of the Treaty of Gandamak. That led the Amir to believe that he could not rely on the British in the face of Russian aggression.[2] Tensions between Russia and Britain were eased when the Russian foreign minister Nikolay Girs and the ambassador to London Baron de Staal set up an agreement in 1887 which established a buffer zone in Central Asia. Russian diplomacy thereby won grudging British acceptance of its expansionism.[3] In 1890 Russia founded Kushka (Serhetabat) at the south end of the new territory and in 1901 connected it by rail to Merv. Kushka remained the southern-most settlement in the Russian Empire and the Soviet Union. The 1921 Afghan-Soviet Treaty of Friendship was the first international agreement made by the Soviet Union. Although "the Soviets agreed to return to Afghanistan, subject to plebiscites, territories in the Panjdeh area ceded under duress by Afghanistan to Russia or Bukhara in the nineteenth century", that was not done.[4]