The Panhard AML (called the AML 245 by Panhard) 60/90 is a light armoured car, with permanent 4×4 drive for mobility. It can carry either a 90 mm quick firing low pressure gun, or a 60 mm breech loading mortar as main weapons. Night vision equipment enables night-time operations, and it is provided with a modern telecommunications system.

During the 1950s, the French Army used the Daimler Ferret in large numbers but decided to build their own armoured car and Panhard started the production of the AML in 1960. Since then over 4000 vehicles have been completed and manufacture continues for the export market. The AML 60/90 have been sold to over 30 countries. In addition to the French production, 1300 AML 60/90 were built under licence by South Africa under the name of Eland 60/90.

An armoured personnel carrier (APC) version was also developed, the Panhard M3. The M3 and the AML share 95% of working parts, encouraging many countries to employ both the M3 and the AML in order to reduce operational costs.

All Irish Army versions were re-engined with diesel engines.

Fitted with coil spring suspension and drum brakes, the AML lacks hydraulic assist on either brakes or steering; only front wheels steer.[2] It also uses nitrogen-filled inner tubes (in this case Hutchinson V.P.-P.V.s), similar to the EBR, providing run-flat capability, on 16 in (41 cm)-diameter wheels; its 11 in (280 mm)-wide Michelin tires can be deflated to reduce ground pressure to as low as 70 to 110 kPa (10 to 16 psi).[2]

All the versions have a common configuration: the driver is seated in front with a two-seater turret on top. There is a door on each side and the power unit in the back.

In the Falklands War, the Argentines deployed 12 AML-90s from Escuadron de Exploracion Caballeria Blindada 181 (181st Armoured Cavalry Reconnaissance Squadron) and an unknown additional number from Escuadron de Exploracion Caballeria Blindada 10 near Port Stanley. During the Battle of Wireless Ridge the only armour versus armour engagement of the war was fought when these units encountered FV101 Scorpions and FV107 Scimitars of the Blues and Royals. The armoured cars were abandoned in Stanley after the conflict ended.[4]

AMLs of the Irish Army (under UNIFIL) were involved in actions against Lebanese militia armour at Atiri in South Lebanon in 1980. Two crewmen received one of Ireland's highest military honours, the Military Medal for Gallantry, for their actions at Atiri.[5]

At least one AML-90 was destroyed by FMLN insurgents with rifle grenades and an M67 recoilless rifle in the Salvadoran Civil War.[6]

AML-90s were deployed, somewhat ineffectually, by Iraqi reconnaissance units against USMC and Saudi National Guard forces during the Battle of Khafji.[7]

The Panhard AML has made some major film appearances, most notably in The Living Daylights, when two Moroccan army AML-90s were mocked up as Soviet reconnaissance vehicles pursuing Afghan Mujahadeen. These examples included mounted RPK machine guns and communications not dissimilar to those in the BRDM-2.

AMLs were first portrayed in the 1973 French thriller The Day of the Jackal, and 1974 Italian war film Finché c'è guerra c'è speranza, which featured an AML-90 of the Portuguese Armed Forces during the Guinea-Bissau War of Independence. 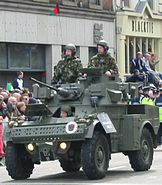