The P400 patrol ships are small vessels of the French Navy. They were designed to accomplish police operations in the French Exclusive Economic Zone. They were built by the Constructions Mécaniques de Normandie, which specialise in small military craft. Two similar ships are in service in Gabon. The P400 were originally designed in two versions: one armed with Exocet MM38 missiles, and another public service version with a smaller 16-man complement; eventually neither of these versions was commissioned as the Navy chose an intermediary version.

Most of these craft are pre-positioned in overseas territories (DOM/TOM) where they carry out sea monitoring missions and secure the EEZ. They also execute missions in the context of French agreements with other nations, typically supporting foreign armies or carrying out humanitarian missions. Since late 2008, ships of the D'Estienne d'Orves class, with their heavy armament removed, are planned to replace the P400 in the high sea patrol role, a task for which the P400 have proved to be underweight.[1]

The P400 are fitted with a hydraulic crane capable of lifting 2.5 tonnes. This allows to use them for anti-pollution operations, by embarking and debarking equipment and anti-pollution chemicals, and to lift out small craft whilst at sea. An unusual feature for ships of this size, the Operational Centre allows a complete monitoring of close surface situations, using radar indicators and tracking tables. The engine can now be monitored remotely, which allows for a smaller crew. The maintenance of the ship was simplified notably by choosing those solutions which allow to clean the ship whilst in populated areas. The P400 can stay 15 days at sea, and have 20 days of food supplies for 28 men.

The engines of the P400 have been a constant source of technical problems since the maiden journey of the lead ship Audacieuse to Dakar. The first problem that occurred related to the carter reductor, then with the transmission, and eventually with a piston - this last item being the most worrying, since it was probably a symptom of a conception problem. This shed a bad light on Alstom who were trying to compete against German motors by MTU. French humourist Coluche came up with the witty remark Après l'Audacieuse, la Boudeuse, la Capricieuse,… voici venu le temps de la Dépanneuse ! (After the Audacieuse, the Boudeuse, the Capricieuse, time has come for the Tow-Truck!).

After these problems were solved, larger exhaust pipes had to be fixed (originally, exhaust was vented underwater to minimise infra-red signature, but it turned out that the ship was taking water from these openings).

After further studies, it became possible to gain the space of one propulsion compartment, which is now used for cargo and personnel. The ships can ferry 20 people, and up to 60 for short travel with a calm sea.

In May 2009, Fougueuse arrived in Brest to be decommissioned, the first of the P400 to be taken out of service.[2] In February 2011, it was decided that eight P400 will be equipped with new engines. Previously, these ships were scheduled to retire according to Jane's Navy International. They will repair to ensure renewal of their operation until 2020. Earlier, the French Navy had intended to retire these ships in the period from 2010 to 2014. The reason for extending the service life of ships of this class is the desire to reduce the cost of procurement of new weapons.

Currently the ships are equipped with two Wartsila SACM UD30 V16 M3 diesel engines. The new engines will be delivered to France's Mother Boda and installed by "Piriu Naval Service" (PNS - Piriou Naval Services) in a 10-year contract worth €30 million (US$39 million). The first of the modernised ships should be returned to the French Navy by March 2011. PNS also undertakes restoration of these ships.[3]

One of the decommissioned vessels, the "La Tapaguese", will be transferred to the Philippine Coast Guard. Worth about €6 million, La Tapaguese will first undergo refurbishment in France, and will be delivered to the Philippines around April 2014 as part of that country's improvement of its maritime defence system.[4]

The French Navy is currently looking into a future class of patrol vessels to replace the P400s as they retire. The working name for this future class is BATSIMAR (Bâtiments de surveillance et d'intervention maritime, or 'surveillance and maritime intervention ships' in English). 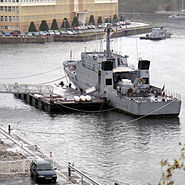