Military Wiki
Register
Don't have an account?
Sign In
Advertisement
in: Pages with script errors, Articles incorporating text from Wikipedia, Geography of Suffolk,
and 5 more

Orford Ness is a cuspate foreland shingle spit on the Suffolk coast in Great Britain, linked to the mainland at Aldeburgh and stretching along the coast to Orford and down to North Wier Point, opposite Shingle Street. It is divided from the mainland by the River Alde, and was formed by longshore drift along the coast. The material of the spit comes from places further north, such as Dunwich. Near the middle point of its length, at the foreland point or 'Ness', lies the Orfordness Lighthouse.[1] In the name of the lighthouse (and the radio transmitting station - see below), ‘Orfordness’ is written as one word.

Orford Ness is an internationally important site for nature conservation. It contains a significant portion of the European reserve of vegetated shingle habitat,[2] which is internationally scarce, highly fragile and very easily damaged. Together with Havergate Island the site is a designated National Nature Reserve[3] and forms part of: the Alde-Ore Estuary Site of Special Scientific Interest (SSSI);[4] the Alde, Ore & Butley Estuaries[5] and the Orfordness-Shingle Street[6] Special Area of Conservation (SAC); the Alde-Ore Estuary Special Protection Area (SPA);[7] the Alde-Ore Estuary Ramsar Site site;[8] the Suffolk Coasts and Heaths Area of Outstanding Natural Beauty (AONB);[9] and the Suffolk Heritage Coast.[10] It is also listed as of national importance in the Geological Conservation Review (GC),[11] as a grade 1 site in the Nature Conservation Review.[12] (NCR) and qualifies for the DEFRA Environmentally Sensitive Area (ESA) scheme.[13]

File:Appleton-Alb345b.1Cropped.jpg
Orford Ness is the peninsula left of and below the river (River Alde) in this 1588 map

The peninsula was formerly administered by the Ministry of Defence, which conducted secret military tests during both world wars and the Cold War.

The site was selected as the location for the Orfordness Beacon, one of the earliest experiments in long-range radio navigation. The Beacon was set up in 1929 and used in the pre-war era. In the 1930s Orford Ness was the site of the first purpose built experiments on the defence system that would later be known as radar. Having proved the technology on Orford Ness Robert Watson-Watt and his team moved to nearby Bawdsey Manor and developed the Chain Home radar system in time for its vital role in the Battle of Britain.

The Atomic Weapons Research Establishment had a base on the site, used for environmental testing. When a laboratory test is conducted to determine the functional performance of a component or system under conditions that simulate the real environment in which the component or system is expected to operate. Many of the buildings from this time remain clearly visible from the quay at Orford, including the distinctive "pagodas". Whilst it is maintained that no fissile material was tested on the site, the very high explosive initiator charge was present and the buildings were designed to absorb any accidental explosion, allowing gases and other material to vent and dissipate in a directed or contained manner. In the event of a larger accident, the roofs were designed to collapse onto the building, sealing it with a lid of concrete.

In the late 1960s an experimental Anglo-American military over-the-horizon radar known as Cobra Mist was built on the peninsula. It closed in 1973, and in the late 1970s and early 1980s the site and building were re-used for the Orfordness transmitting station. This powerful mediumwave radio station - originally owned and run by the Foreign Office, then the BBC and, after privatization in the 1990s, a series of private companies - was best known for transmitting the BBC World Service in English around the clock to continental Europe on 648 kHz from September 1982 until March 2011. The station has been disused since May 2012. Orford Ness is now owned by the National Trust and is open to the public under the name "Orford Ness National Nature Reserve", though access is strictly controlled to protect the fragile habitats and due to a residual danger to the public from the site's former use by the military. Access is therefore only available by the National Trust ferry from Orford Quay on designated open days.[14]

Owing to its military history, its stark appearance and the fact that it was closed to the public for many decades, several apocryphal stories have circulated about Orford Ness. The best-known is the suggestion that Nazi troops attempted to invade England and actually disembarked at the tip of the peninsula near Shingle Street, before being repelled with a wall of fire. Official sources denied any such attempted invasion took place, an assertion apparently confirmed by classified documents released in 1993. More recently, the flashes of the lighthouse were implicated in the Rendlesham Forest UFO sightings of late December 1980. In 2013, Trinity House announced that the lighthouse is to be discontinued as an aid to navigation and marked on UKHO charts as disused.[17]

View from the Orford Ness dock towards Orford Quay.

The Black Beacon radio navigation tower and the lighthouse. 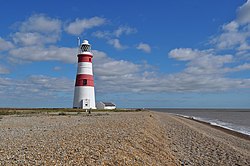 Interior of a "pagoda".

The spit formed almost entirely of flint deposited by waves through the process of long-shore drift. The main influence on its formation has been storm waves throwing shingle over the top of the beach crest, where it is protected from ordinary wave action.[18] Over time, this process leads to the formation of stable ridges of fine particles, and swails of coarser shingle.[18]